Armillaria hinnulea was described as a new species in 1983 based on 39 collections: 33 from Tasmania, five from Victoria, and one from the South Island of New Zealand. It is distinguished macroscopically from A. novae-zelandiae by its non-slimy cap, and a stem that broadens at the base, and from A. limonea by its brown cap which lacks sandpaper-like scales, and its overall pinkish-brown colours, especially in the gills. Armillaria hinnulea is also readily differentiated microscopically, in particular by its possession of a particular structure (clamp connection) not found in other Southern Hemisphere Armillaria species. It is therefore speculated that A. hinnulea is more closely related to Northern Hemisphere species that also exhibit this feature. Recent phylogenetic analysis of the internal transcribed spacer region of the ribosomal DNA supports this Northern Hemisphere relationship. In Tasmania and Victoria, A. hinnulea is found in wet sclerophyll forest dominated by Eucalyptus regnans and E. obliqua , and with co-dominants that include Nothofagus cunninghamii and Acacia melanoxylon . In New Zealand it has been found only in the Nothofagus forests of the north-western quadrant of the South Island. It has not been recorded in pine plantations, and it is not known if it is harmful to Pinus radiata. 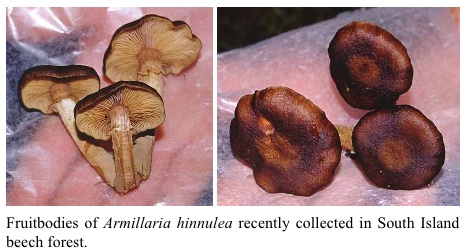 Could this be a recent invasion of New Zealand as a result of wind dispersal from Australia? Forest Research has begun a research programme to look at the population genetics of A. hinnulea and assess the current state of variation between different populations as an indicator of whether it is a relatively recent arrival or a much more ancient member of the New Zealand fungal flora. A field trip to the Nelson region in May 2004, in tandem with the annual New Zealand Fungal Foray (FHNews 129: 1–2), furnished fresh collections and cultures of this species which will be utilised for population genetic studies that will be initiated in the upcoming year. The goal of this FRST-funded research programme is to shed light on how a wood-colonising basidiomycete and pathogen might invade a native forest, and how such insight could be used to enhance New Zealand’s biosecurity against human-assisted fungal invasions.