In 1988 lan Hood published a map of Armillaria distribution based on records held at NZ FRI. This data consisted primarily of records of Armillaria on Pinus radiata and a few on other exotic species. Many of these records simply note the presence of rhizomorphs and mycelial sheets and do not record which Armillaria species were involved. And many of the records before 1980 are for A. mellea which we now know does not occur in New Zealand. So we have a good idea of the distribution of the genus but not of the species. As part of the Armillaria taxonomy project I am mapping their distribution based on fruitbody collections. At present there are only seventeen of these records for the South Island but they indicate that A. novae-zelandiae is distributed over the entire island, A. limonea is restricted to Nelson/ Marlborough, and the third unnamed species in northern Westland.

Note: all collections of Armillaria fruitbodies would be greatly appreciated. 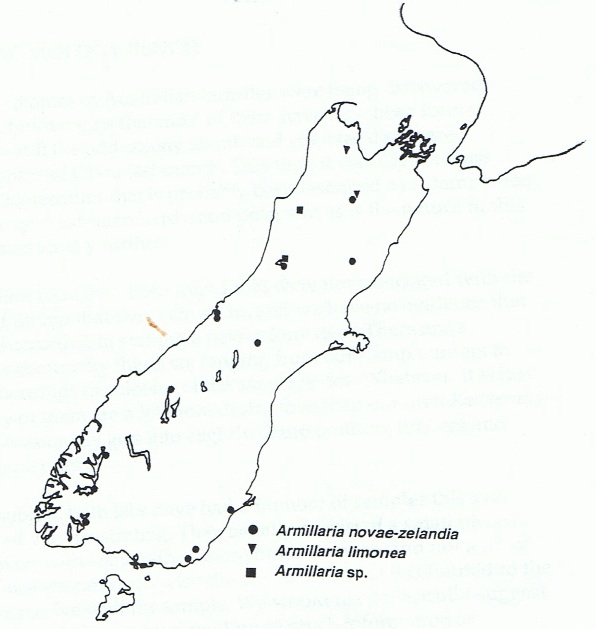 I recently spent twelve days in the South Island with Dr Ron Petersen, University of Tennessee, collecting agarics (mushrooms) and in particular I was looking for Armillaria in Nothofagus forest. Forests searched ranged from Fiordland National Park to Nelson Lakes National Park. It was interesting to note that south of the west coast beech gap only Armillaria novae-zelandiae was encountered. At Lake Hochstetter, just north of Greymouth, the elusive third species Armillaria 'hinulea' dominated. And around Lakes Rotoiti and Rotoroa there were massive fruitings of A.limonea and only the occasional A.novae-zelandiae. Two collections of the third spedes, one from the west coast / Nelson area and the other from Tongariro, were initially assigned to the Australian species A.hinulea by Kile & Waning (1983). However in 1988 Kile & Watling attempted to mate Australian and New Zealand isolates and found them to be intersterile indicating the New Zealand species to be a new distinct biological species. This new species needs to be confirmed hence my trip and the call for Armillaria collections in FHNews 30. The new species can be distinguished from A.novae-zelandiae by its non-slimy cap and predominantly pinkish-brown coloration particularly noticeable in the gills (see lan Hood's 'Fungi on Wood' p.310).