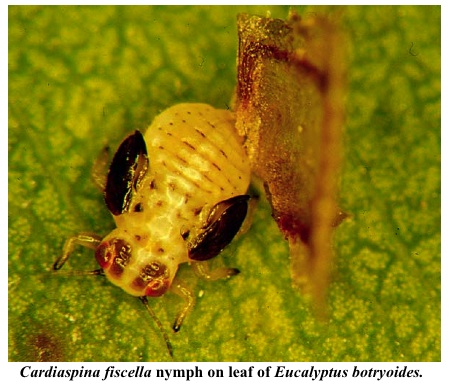 Like their counterparts in New Zealand, eucalypt growers in California continue to experience problems with recurring introductions of Australian Eucalyptus psyllids. The blue gum psyllid, Ctenarytaina eucalypti, reached California in 1991 where it caused problems in ornamental eucalypts grown for the flower industry. Biological control was initiated using the same parasitoid that attacks this psyllid in New Zealand, Psyllaephagus pilosus. The red gum psyllid, Glycaspis brimlecombei, became established in California in 1998 (FHNews 91:1), and affected the widely planted Eucalyptus camaldulensis. Its impact on host trees was reminiscent of that made at about the same time by the brown lace lerp, Cardiaspina fiscella, on E. saligna and E. botryoides trees in this country. A biological control initiative has been launched against the red gum pysllid using an Australian parasitoid, Psyllaephagus bliteus. P. bliteus was found parasitising Glycaspis granulata in New Zealand in 1999, under the name P. quadricyclus (FHNews 96:1). A biological control programme has also been initiated against the latest arrival, Eucalyptolyma maideni, which builds lerps (protecting covers) on leaves of the bloodwood species Eucalyptus citriodora and E. maculata . Since reaching California in August 2000, this psyllid has caused extensive defoliation and has spread to a number of new areas. Californian entomologists will search for suitable host-specific parasitoid species in Australia, as part of the control programme. Eucalyptolyma maideni is also present in New Zealand, but has not caused significant health problems here.