Termites are social insects that live in colonies consisting of a queen and king, workers and soldiers. Winged reproductives are produced seasonally and fly from the parent colony. Only a very small proportion of them successfully mate and set up new colonies.

Termites feed on wood and other sources of cellulose, and can attack living trees, logs, posts, and landscaping and building timber.
New Zealand has three species of native termite, but they do not form large colonies and are not considered destructive.

Incursions of five different species of Australian termites have been reported in New Zealand. There have been numerous (mostly historical) interceptions of termites at the border in imported Australian hardwood timber. Between 1940 and 1980, about 50,000 North Island sites were inspected for invasive termites, with around 110 infestations detected and successfully treated. Due to the number of termite interceptions and incursions, stricter border controls for imported timber were imposed, including compulsory fumigation.

However, because colonies can live undetected for many years in the timber in which they were imported, new post-border detections of Australian termites are still occurring, decades since they entered the country. Because these infestations are generally still localised at the time they are detected, response options remain available.

Colonies of two species of Australian termite, Coptotermes acinaciformis and Porotermes adamsoni are currently known to exist in New Zealand, and are the subject of MAF Biosecurity New Zealand (MAFBNZ) responses. Unlike native termites, these species have the potential to cause considerable harm to New Zealand's economy, environment and social and cultural values.

Termite colonies are often difficult to detect visually. In many cases they are only found when winged reproductives leave the nest or when considerable feeding damage has occurred. Traditional treatments, such as destruction of host timber, trenching or ground spraying with broad-spectrum insecticides like dieldrin and dusting active termites with arsenic are not always practical and effective, or are now considered environmentally unacceptable.

Tools developed in recent years are making it easier to detect and treat termite infestations. Thermal and microwave imaging can be used to detect the heat or movement of termites inside wood. More selective insecticides and targeted delivery systems have resulted in more effective and environmentally acceptable eradication. In particular, insect growth regulators such as hexaflumuron, administered in targeted bait stations, have proved very successful against termites that forage for food away from the parent colony. Hexaflumuron is slow acting (it takes effect when the termites moult) and is spread through the colony by the practice of shared feeding. This makes it possible to eliminate even large infestations covering wide areas with minimal intervention.

For example, a large infestation of the destructive subterranean termite Coptotermes acinaciformis was detected at Otorohanga in 1990. Eradication programmes through the 1990s using traditional techniques were unsuccessful. In 1999 (when the infestation covered 1.4 hectares) hexaflumuron baits were deployed and, within three months, the termites had been eliminated.

Coptotermes acinaciformis
C. acinaciformis is a subterranean termite that forms nests in timber that is in contact with the ground. Of all species in Australia, it is considered to have the most destructive impact on buildings and other wooden structures. They will also feed on living trees. They form large colonies and tunnel up to 50 metres from the nest to forage for food. They tunnel underground and, where necessary, form mud runways above ground.

There are two current MAFBNZ responses to this termite:

Both infestations were treated with hexaflumuron baits and termite activity has ceased. The sites will be monitored for five years before eradication is officially declared.

Porotermes adamsoni
P. adamsoni is a dampwood termite that attacks dead wood and living trees (principally eucalypts, but also other species including Pinus radiata). It gains entry to living trees through points of damage or decay, and can then move into sounder timber. It is considered a forest pest in southern New South Wales and Victoria. P. adamsoni is not a serious pest of houses in Australia, but may attack house timbers where decay allows access. Colonies are relatively small and are slow to grow and spread. It is considered a "cool climate" termite, and can survive cold conditions, even under snow, by producing an anti-freeze.

P. adamsoni is not susceptible to hexaflumuron baiting as workers do not forage outside of the wood occupied by the colony, and the destruction of host timber is the most commonly used eradication tool.

There are three current MAFBNZ responses to this termite in New Zealand:

Surveillance is underway in an effort to locate the Kaipara and Auckland colonies.

Detecting the presence of invasive termites 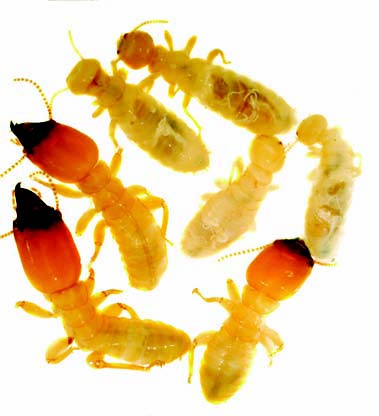 Invasive termites are most likely to be associated with historically imported timber such as railway sleepers, now commonly used for landscaping, and utility poles used for power and telephone lines. Subterranean termites are likely to extend their activities from this material into nearby trees, buildings or other wooden structures.

As termites excavate timber internally and leave a thin external layer, damage is often not obvious, although it may result in the bubbling of timber surfaces. With subterranean termites, the most obvious signs are mud leads across open surfaces and mud packing between layers of landscaping timber or inside wall cavities. Their subterranean tunnels are usually found in the top 20 centimetres of soil.

Winged reproductives fly from their parent colonies en masse on hot, humid summer evenings. They are attracted to light and may enter houses or become caught in spider webs close to light sources. However, native termite reproductives will also be flying in the same conditions. 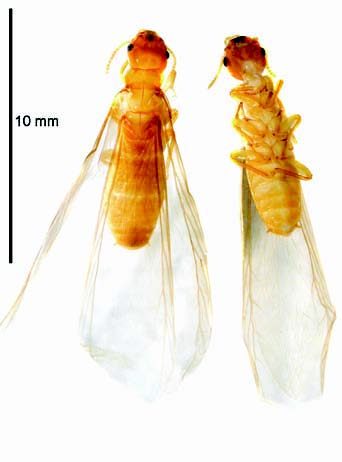 Colonies inside living timber could also be found while cutting down trees or splitting wood.

If you think you have found invasive termites DO NOT disturb their activity or the surrounding area. If possible, collect some individuals, preferably soldiers (larger, darker head with mandibles) and place the container in the freezer. Call the MAFBNZ disease and pest hotline on 0800 80 99 66.