Forest and Timber Insects in New Zealand No. 39: A Keyhole Ambrosia Beetle.

Type of injury
Xyleborinus saxesenii usually bores into the wood of dying or recently dead trees, stumps above ground level, and freshly cut logs, and occasionally into freshly sawed timber. The entry tunnels, which are more readily detected when bark is removed, are circular in cross section and slightly less than 1 mm in diameter. If larvae are reared the short entrance tunnel extending radially into the wood leads to an irregular brood chamber. This “keyhole” chamber is excavated parallel to the grain and becomes darkly stained by fungi (Fig. 2). In most softwoods damage is confined to the outer 3 or 4 cm of sapwood of material over 20 cm in diameter, and there are seldom more than one or two tunnels per 200 cm2 of sapwood surface. However, damage to indigenous hardwoods often extends into the heartwood and material as small as 5 cm in diameter may be utilised. Attack density may here exceed 20 tunnels per 200 cm2. Infestation of sawn timber has not been known to develop beyond the entrance tunnel stage. 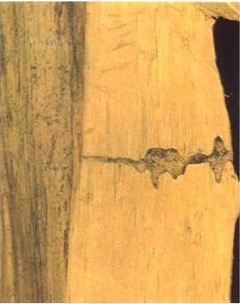 Fig. 2 - Keyhole chamber of X. saxesenii in Pinus radiata (radiata pine). The darker brown portion of wood on the left is the exterior surface from which bark has been removed to expose the tunnel entrance. The black staining within the chamber is caused by an ambrosia fungus on which larvae and adults feed (x1.5).

Hosts
In New Zealand attack by this insect has been recorded in more than 30 species of native and exotic hardwoods and softwoods.

Distribution
This beetle was first described from Europe but now has a nearly world-wide distribution. The earliest New Zealand record is 1961. It is believed to have been accidentally introduced in battens on cable drums imported from England. It is established throughout most of the North Island with the exception of the Wellington area. In the South Island it is present in the Nelson region and has also been recorded at Dunedin.

Economic importance
This insect is of no importance in logs intended for use within New Zealand since the entry tunnels are removed with the waste slabs cut off during sawing. Entry tunnels made after sawing have little effect on the strength of timbers, and seasoning or preservative treatment prevents the development of brood chambers.

Logs and sawn timber containing insects or their tunnels are not permitted to be exported, and so attack in windthrown and fire-killed trees may limit the time during which logs can be salvaged for this purpose.

Description, life history, and habits
The adult female is a compact, cylindrical, black to brown beetle, 2.5 mm long and 0.8 mm wide (Fig. 1). By using a hand lens it can be seen that the prothorax and elytra (wing cases) are shiny and almost hairless, and that the end segments of the antennae are swollen to form a club. The flightless male is about 1.5 mm long, slightly less than 0.7 mm wide, lighter in colour, and has a slightly more convex body shape than the female when viewed from the side. The larva is a small, white, legless, C-shaped grub with a light brown head.

Emergence occurs from September to March but most adults appear in November and December. During cool weather mature adults do not emerge but accumulate within the nest, emerging on the first warm day. Emerging females fly only in the afternoon and only if the temperature exceeds 21°C. Maximum flight activity occurs between 26°C and 29°C with a sharp decline when 32°C is exceeded. Females initiate nests in material which is dead or dying or has been felled from one week to several months. The eggs are laid in the primary tunnel over a period of up to 12 weeks and the larvae, which moult twice to become fully grown, extend the parent gallery to form the characteristic keyhole chamber.

The larvae and female parent feed on an ambrosia fungus which is introduced to the nest by the parent and grows on the chamber walls. Although both simple and compound nests have been found in almost all hosts a single simple chamber is typical of softwood infestations. Hardwood hosts commonly support compound multi-chambered nests. The extent and complexity of the brood chamber are closely related to the number of progeny which are reared. It is not clear whether this relationship results from variation in the fecundity of individual female parents or from competition for food due to variations in the growth rate of the ambrosia fungus.

A single female may produce from two to more than 300 offspring. The ratio of males to females is unequal and has been found to vary from 1:4 to 1:64. Copulation occurs within the nest between males and females of the same brood, the males ultimately emerging or being ejected from the nest. In those nests which contain few offspring, males may be absent and the virgin females which emerge cannot reproduce. The life cycle may be completed in 8 to 12 weeks and although two generations a year is usual a third may occur under optimal conditions.

Control
No predators or parasites of X. saxesenii have been found in New Zealand. The number of mated females emerging, and the availability of suitable hosts, are the main factors affecting population size from one generation to the next. Small nests often contain no males, so anything which tends to reduce the size of nests in one generation increases the proportion of virgin females emerging, and lowers the number of successful nests in the following generation. Removal of the most suitable breeding material from around areas in which this beetle is a nuisance should therefore reduce populations.

During the flight season it may be necessary to use insecticidal dip or spray on forest produce intended for export, in order to prevent infestation.