Gum Leaf Skeletoniser - is it a risk to native plants?

Scientists at the Crown Research Institute Scion have found New Zealand's native plants are fortunately not a popular menu choice for an unwelcome Australian caterpillar.

Gum leaf skeletoniser (Uraba lugens), a caterpillar that feasts on gum trees in Australia, is a relatively recent arrival to New Zealand. As with other immigrant pests, it is necessary to learn what foods the insect may develop a taste for here.

Better Border Biosecurity-funded scientists based at Scion in Rotorua have been exploring whether they can accurately predict the field host range of the insect using host specificity tests in the laboratory.

Because of the complexity of the gum leaf skeletoniser's biology, numerous testing methods have been trialled in a bid to accurately predict which native trees might be targeted by this pest. By testing the dietary range in the laboratory, scientists can stay a step ahead of the insect by predicting risks as it spreads into new areas.

Scion entomologist Dr Toni Withers says it is good to know about the insect's likely feeding habits before it gets the opportunity to make the decisions itself on what is palatable and attractive for its larvae to eat. So how have Dr Withers and her colleague Dr Lisa Berndt gone about this tricky task?

"We start by looking at what New Zealand plants are the closest native relatives to the gum leaf skeletoniser's main hosts in Australia. These hosts include species of Eucalyptus and Angophora, which belong in the family Myrtaceae. Notable New Zealand trees such as Metrosideros spp., which include pohutukawa and rata, are in this family, so this is a logical place to start host testing," Dr Withers explains.

"For a native plant to be considered a true host, it must be attractive enough to provide food and lodging for the insect's complete life cycle. This means the mother moth has to also be willing to lay her batch of eggs onto the plant, so that the hatching larvae can begin to feed on it."

Laboratory tests suggest that while gum leaf skeletoniser larvae will nibble on certain native plants (see table), they will only do so if they fall off Eucalyptus trees onto the native plants. However, only some of those native plants, such as southern rata, are palatable enough for the larvae to feed for the remaining instars (development stage between each moult of an insect's skin). Gum leaf skeletonisers can moult up to 14 times before spinning into a pupa.

"All our oviposition [egg-laying] testing has shown that the moth is more likely to lay her eggs on a neutral substrate such as part of the cage frame or netting, than on any of the indigenous New Zealand Myrtaceae and Nothofagaceae. This is good news for New Zealand because our native plants are quite simply not attractive oviposition substrates for moths," Dr Withers says. 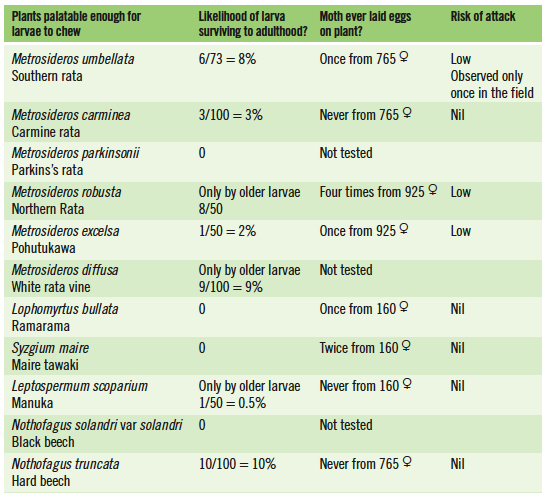 This result adds confidence to the prediction made previously that gum leaf skeletoniser poses little threat to New Zealand native flora. The only damage likely to occur is from spill-over feeding, when a half-grown larvae gets a fright or is disturbed from its feeding on a host tree, and spins on a silken thread or gets blown off its leaf onto a native plant growing beneath or close by.

Field surveys revealed that as many as 10 percent of pohutukawas growing within approximately 100 metres of infested Australian trees may show damage during the peak feeding times of the larvae (early spring and late summer).

Are there any other plant hosts?

Egg-laying and some defoliation of trees by larvae in the field has been recorded on a range of northern hemisphere tree species including Betula pendula, Fagus sylvatica purpurea, Fraxinus excelsior, Liquidambar styraciflua, Populus sp., Quercus coccinea and Quercus paulstris.

“We were able to confirm some of these are potential host associations by observing egg-laying in the laboratory on Liquidambar styraciflua, Fagus sylvatica purpurea and Quercus coccinea. We will now need to check if larvae can rear through to adult moths on these trees,” Dr Withers says. Scion and HortResearch scientists, under the Better Border Biosecurity oundation for Research, Science and Technology (FRST)-funded research programme, are keen to investigate why the insect is targeting species so different from its native range. “We do know that any impact on these trees is likely to be minimal, especially as they lose their leaves in winter, which is when the winter generation of gum leaf skeletoniser larvae feed. So only the summer generation is likely to be able to complete a generation on any of these northern hemisphere trees species, returning to utilise their Australian hosts again over winter,” Dr Withers says.