Update on the spread of bronze bug in Auckland

In March 2012 an Australian insect, Thaumastocoris peregrinus or bronze bug, was discovered in a localized area of Auckland, during routine high risk site surveillance conducted by SPS Biosecurity on behalf of the Ministry for Primary Industries (MPI). This find was subsequent to other detections in South Africa, South America and Italy over the past decade, all following an outbreak in the Sydney area in 2001/2002. 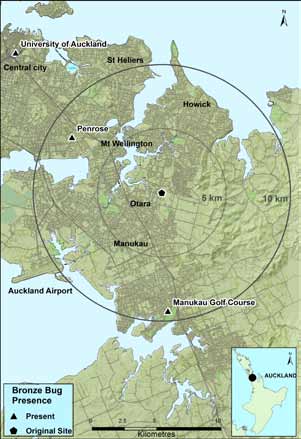 Bronze bug is a sap feeder that causes leaf discoloration, or ‘winter bronzing’, and can lead to premature leaf drop and branch death. Over 30 species of eucalypts have been recorded as host here and overseas, but the most severely affected species in New Zealand thus far appears to be Eucalyptus nicholii, a popular amenity tree. In New Zealand it has also been recorded on E. globulus (and subspecies), E. macarthurii, E. viminalis, E. leucoxylon and Corymbia ficifolia. The latter two are host records not previously reported outside of New Zealand.

In April 2012 MPI conducted a survey and found that bronze bug appeared to be contained within a 5 km radius of the original find (see map). As of June this year, we now know it to have exceeded the 10 km radius north to the University of Auckland’s city campus (85 Symonds Street). The southernmost known point is the Manukau Golf Club, where a heavily infested E. nicholii was removed this autumn, but at least one other tree bordering the golf course (Holms Road, Takanini) is known to contain a population. The farthest distance from the original find is now approximately 16 km, with a distance between the northern and southernmost points of 24 km.

The new host and location records for this insect have all been found by Paul Bradbury and Chris Inglis of SPS Biosecurity and Maria Saavedra Roman, a graduate student supervised by Dr. Greg Holwell (University of Auckland) and Dr. Toni Withers (Scion). Maria has made good progress this year monitoring the bronze bug infestation on Eucalyptus nicholii trees at a south Auckland site and has found they continue to breed all year round, slowing down but not stopping reproduction even over the cold winter months. Maria is measuring the maturation rate and survival of bronze bugs under a wide range of controlled temperatures. This will provide her with data to input into a CLIMEX model that should be able to predict how widely spread the bug will eventually be in New Zealand. These predictions will assist the forest industry with longer term management plans.