Forest and Timber Insects in New Zealand No. 6: Calliprason pallidus. 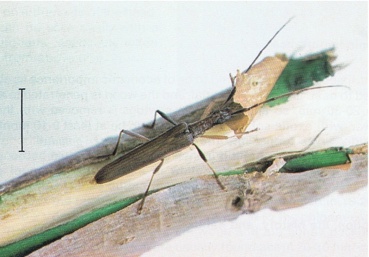 Type of injury
The larvae of Calliprason pallidus tunnel beneath the bark and in the superficial sapwood of freshly felled logs and recently-dead standing trees. Dead suppressed branches of living trees are also attacked.

Hosts
A wide range of native and exotic softwoods is attacked. This insect is very common in the suppressed branches of Pseudotsuga menziesii (Douglas fir) and Pinus radiata (radiata pine).

Distribution
Calliprason pallidus is a native insect which occurs throughout New Zealand.

Economic importance
This insect is not considered to be of economic importance as attack is confined to dead and dying material, and the wood is penetrated to a depth of only 20-30 mm, so any damage in sawlogs is removed with the slab. Moreover, with exotic softwoods logs have to be at least 9-10 months old before the larvae tunnel into the wood. Calliprason pallidus is not often present in export logs, but if it is then export is prohibited.

Description, life history, and habits
The adult (Fig. 1) is a longhorn beetle 10-18 mm long, 2-3 mm at the widest point, and somewhat flattened. The head is about the same width as the thorax, which is distinctly narrower than the elytra (wing cases) where they join the thorax. The slender antennae are about the same length as the body. The legs are slender and, in general appearance, the beetles look rather fragile. The head, thorax, and legs are brown but the elytra usually have a distinct light-greenish tinge. When disturbed the beetles emit a "carbolic" odour.

The mature larvae can attain a length of up to 20 mm. They are widest just behind the head (maximum 5mm) and gradually taper to the rear. They are creamy- white except for the head which is dark brown. The jaws are gouge- like. The most characteristic feature of the larva is the presence of about six coarse bristles on either side of the head. These can be seen easily with a x10 hand-lens, especially when viewed from above (Fig. 2). 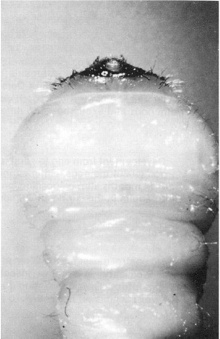 Fig. 2 - Top view of front portion of a larva of C. pallidus showing the coarse bristles on either side of the head.

The beetles can usually be found in December and January but have been recorded from September to March. Hudson (1934) states that they may be found at night on the flowers of white rata. Mating has been observed on tree trunks during the evening, and the eggs are laid in bark crevices under the raised edges of the bark. The eggs hatch in 15-26 days (average 18-21 days) and the larvae bore through to the phloem cambium region. The larval tunnels engrave the wood and are tightly packed with flour-like frass. Pupal chambers are usually found about 20-30 mm into the wood.

There are apparently-conflicting reports regarding the feeding habits of the larvae. Morgan (1960) says that the larvae feed for some time in the phloem cambium region and enter the wood about halfway through larval development, becoming wood borers. However, Dumbleton (1957) and Rawlings (1953) record that the larvae tunnel beneath the bark and enter the wood to pupate. Morgan also says that pupal chambers are constructed in the wood and are open to the inner bark, but Dumbleton states that when the larvae penetrate the wood to pupate they block the entry tunnel with coarse shredded wood. Morgan's observations were made mainly on indigenous hosts, and those of Dumbleton and Rawlings in radiata pine. Forest Research Institute records confirm that the larval workings in indigenous and exotic hosts do differ in this way.

Control
No control measures are taken at present because they are not considered necessary. The native insects Guiglia schauinslandi (Ashmead) (Hymenoptera: Orussidae), and Perrisinoides cerambycivorae Dugdale (Diptera: Tachinidae) are known to parasitise the larvae.