MAF Biosecurity New Zealand Incursion Investigator Graham Burnip spoke at the International Union of Forest Research Organizations (IUFRO) conference about the forest biosecurity risk of wood wasps. This is a summary of his paper, which outlined historical border detection records and case studies of recent incursions.

Worldwide there are about 100 species of insects that are known collectively as wood wasps or horntails. All are classified within the family Siricidae, hence they are also commonly known as siricids. Although they are called wasps, they do not attack people. 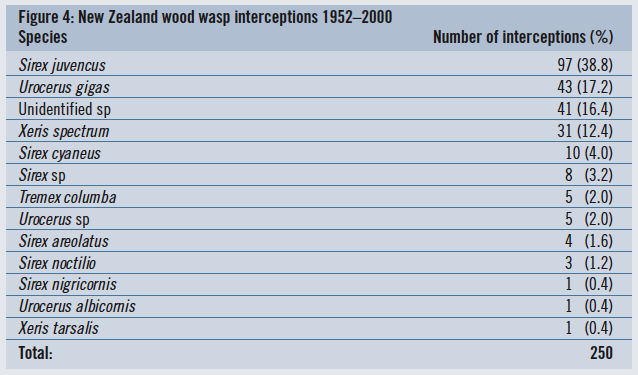 All are forest tree pests to varying degrees, and most pose some risk to New Zealand's forests. The adults shown in Figure 1 are of Sirex noctilio, the only wood wasp present in New Zealand. Their pest status is partly related to wood tunnelling by the larvae (Figure 2), but more importantly, during oviposition (egg laying), adult wasps inject a bascidiomycete wood decay fungus into the tree. The fungi rapidly colonises the tree's vascular system (Figure 3), frequently killing it. This in turn makes the wood more palatable to the tunnelling wood wasp larvae, in what is a textbook example of a symbiotic relationship.

Records of wood wasps intercepted at New Zealand's borders have been maintained since 1952 (Figure 4). Data shows the key species New Zealand is most at risk from are Sirex juvencus, Urocerus gigas and Xeris spp - all northern hemisphere species.

Cedar are a favoured host of S. juvencus. Given S. juvencus is our most commonly intercepted wood wasp, and the golf course's proximity to an international airport, the worst was feared.

Identification of larvae collected from the cut trees was unable to determine which Sirex species it was – basically the different species cannot be differentiated by the physical characteristics of the larvae. What we needed, but had not found, were adults.

Time is of the essence in these situations, so the same day we initiated a project using DNA molecular diagnostic methods to compare the larvae we had found with larvae of known S. noctilio, in order to see if they were the same. Meanwhile, the cut trunk sections were axe-split, hoping to find an about-to-emerge adult within a tunnel. We got lucky and found an adult that had died prior to emergence. This was confirmed as S. noctilio, the species already present in New Zealand.

After further questioning of the golf club grounds’ staff, it became apparent they were aware that a recent change of under-tree herbicide use had caused needle-fall on some trees. We think the reduced moisture content and other changes that resulted from this herbicide damage resulted in the cedars becoming attractive and susceptible to wood wasp attack.

This case represented a new host association record for Sirex noctilio on the Cedrus atlantica host, and this has been published where it will hopefully be detectable by international search engines.