Forest and Timber Insects in New Zealand No. 11: Looper caterpillar. 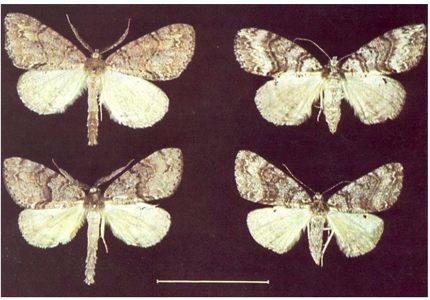 Type of injury
Caterpillars of Pseudocoremia suavis feed on the foliage of their host plants.

Hosts
The insect attacks a wide range of indigenous and exotic hardwood and softwood trees and shrubs.

Distribution
Pseudocoremia suavis is a native insect found throughout New Zealand at altitudes up to about 900 m, wherever suitable host plants occur.

Economic importance
Populations of this insect normally remain at endemic levels, but epidemics have been recorded in exotic conifer forests, e.g. on Pinus spp., mainly Pinus radiata, in Canterbury between 1950 and 1961, and on Pseudotsuga menziesii (Douglas fir) in Kaingaroa State Forest in 1970 and 1972. It is thought that these outbreaks were associated with tree stress produced by drought in Canterbury and the effect of dry summers and the needle cast fungus, Phaeocryptopus gaeumannii, in Kaingaroa. Epidemic populations cause severe defoliation (Fig. 5) which leads to decreased growth rates or even to the death of badly affected trees.

Description, life history, and habits
The moth has a wing span of 26-34 mm. The colour is variable, but usually the forewings are pale brown, speckled and mottled with darker brown, and the hindwings are a uniform pale yellow. Near the middle of the forewing there is a characteristic conspicuous dark-brown transverse line which bends sharply towards the outside just before it ends at the rear edge. There is a double jagged line across the forewing close to its outside edge. Females are usually darker than males and do not have pectinate (comb-like) antennae. The abdomen of the male is relatively longer and more truncated than that of the female which is rather pointed (Fig.1).

The adults are nocturnal and are attracted to light. Flight activity commences about an hour after sunset and continues until sunrise, providing temperatures are above 10oC. The moths feed on nectar of flowers (Fig. 2) and on honeydew excreted by scale insects. They may be disturbed from the litter or from resting places on trees during the day.

Eggs are laid randomly on their sides on the foliage of host plants. They are oval and pale green at first, but turn red a few days before hatching. 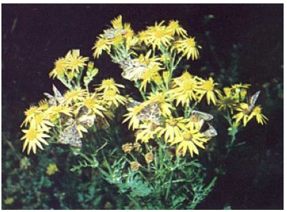 The caterpillar (described fully by Dugdale, 1958) is a looper with three pairs of thoracic legs, one pair of abdominal and one pair of anal prolegs (Fig.3). There are five instars, or larval stages. The first instar is pale green with a dark-brown stripe extending from the thorax to the anal shield, just above the mid-line of the side. The head is light-brown and is held obliquely. The second instar bears the same pattern, sometimes with two dark blotches on the back of abdominal segment five. The third instar is a darker green or brown-green, with the lateral bands still present. The dark blotches appear on the backs of abdominal segments two, three, and four. There is a great variation in the number and intensity of these blotch pairs. The head is red-brown. In some caterpillars the lateral bands are broad, giving the insect a black appearance from above. The fourth instar displays a transition stage between the pattern of the third and that of the last instar. The head is dappled in brown and grey, or is red-brown, and is held more or less perpendicularly when at rest. The body is bright green or dull brown, and the lateral line is broken at each segment. There is often a conspicuous broken white line along the centre of the back. The blotches on the back are now formed into chevrons, and the underside is pale green with a central dark triangle on each segment.

The fifth instar caterpillar (Fig. 3) has the body outline broken by minute soft projections and thick white hairs along the underside. The usual pattern, basically a line of diamond shapes along the back expanding well down the sides, is often absent, the caterpillar being either pale green with lateral stripes of white or buff, or yellowish-green. The underside is pale blue-green. Two pairs of black or dark-brown tubercules (solid pimples) are present on segments four and eight of the abdomen. The head is brown or grey, dappled and darker along the cheeks. Caterpillars are sometimes almost wholly black, even the underside being slate in colour. In all cases the dark triangle on the mid-line on the underside of each abdominal segment is discernible. 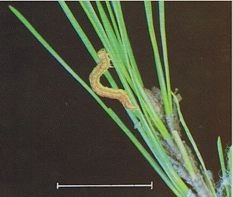 The caterpillars feed on the foliage of their host plants. On the narrow needles of exotic conifers young larvae, particularly, may chew at the base of the fascicles only. This feeding causes the end part of the needle to die and turn red, or it may fall to the ground. In this way more foliage may be destroyed by the younger stages than by the older caterpillars, which are more inclined to consume the whole needle. The half-chewed needles often droop downwards, and this gives the foliage a characteristic scorched appearance (Fig.4). The caterpillars drop on threads of silk when disturbed or attacked by predators. The prepupal stage spins down from the tree and pupates in the litter layer, or under stones or twigs. Occasionally a pupa may be found on the branches of a tree. 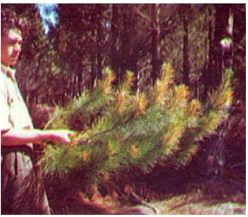 The life cycle of Pseudocoremia suavis varies according to latitude. In Canterbury there are two distinct generations, producing adults in April to September and November to January. At Rotorua, in the central North Island, there is little synchronisation of the life cycle with time of year. Adults may be caught all year, more in summer, but with no well-defined peaks in abundance. There is evidence that the lifecycle is more synchronous in epidemic populations. Peak numbers of caterpillars during epidemics on Douglas fir in Kaingaroa occurred in February and March, with a much smaller second peak in November.

Control
Populations are usually kept in balance presumably by predators and parasites. Thirteen primary parasitoids have been recorded from this species with the dominant species being Aleiodes declanae van Achterberg (previously Rogas sp.) (Berndt et al 2006). Epidemics in Canterbury have been terminated naturally by a cytoplasmic polyhedral virus. This virus has also been recorded from Kaingaroa, but was not responsible for the rapid decrease in populations after outbreaks there. Aerial applications of insecticides are only likely to be used as an emergency measure, as re-invasion of sprayed areas is very rapid. 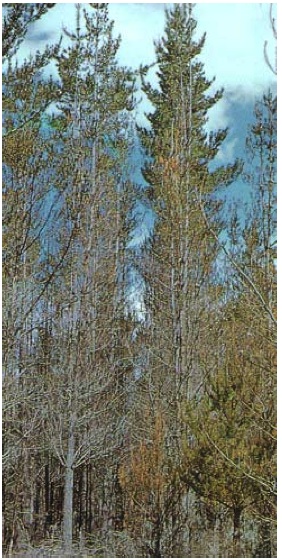