Forest and Timber Insects in New Zealand No. 56.
A native Looper 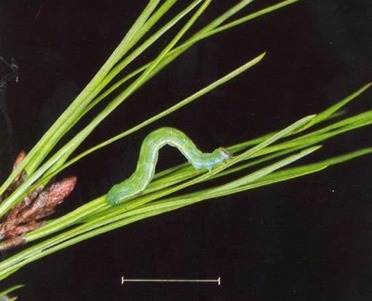 Type of injury
Caterpillars (Fig. 1) of Pseudocoremia fenerata eat the foliage of their host plants. On pines young caterpillars may chew at the base of needles; the half-chewed needles either turn red and droop, or drop off.

Distribution
This native insect occurs throughout New Zealand wherever suitable host plants are present. It is rare in the extreme south.

Economic importance
Next to Pseudocoremia suavis (previously known as Selidosema suavis, Leaflet No.11), P. fenerata is the most frequently encountered looper caterpillar on radiata pine and Douglas fir; in some North Island plantations populations are sometimes higher than those of P. suavis. However, it is of little economic importance and has never been recorded as causing severe defoliation.

Description, life history, and habits
The moth has a wingspan of 27-34 mm (Fig. 2). The forewings of the male are a very pale, slightly yellowish-brown, whilst those of the female are pale grey. Several dark, jagged lines cross the wing including a double one close to the outside edge. Beyond this line, almost on the edge of the wing, is a row of dark spots. The hindwings are almost white and sometimes have a series of faint dark spots around the outside edge. The body is similar in colour to the forewing, with the abdomen of the male being somewhat longer and slimmer than that of the female. The antennae of the male are comb-like while those of the female are whip-like. 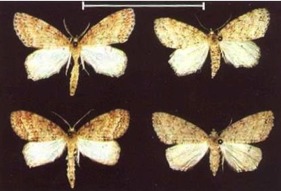 The eggs, which are dark green and oval, are laid singly on the host foliage. The caterpillar is a looper with three pairs of thoracic legs, and one pair of abdominal and one pair of anal "prolegs". It has a smooth, cylindrical, often plump body. There are five instars, or larval stages. The first instar is 2-5 mm long, has a light brown or greenish head and a green body with a dark band along the upper part of its sides. The second instar (Fig. 3) is 58 mm long, has a shiny, light brown or green head and a green body with faint side lines. The third instar is 8-14 mm long, has a shiny green head and a green body with no lines or only very faint ones present. The fourth (length 14-20 mm) and fifth (length 20-27 mm) instars have a head which is green and shiny and has at the sides a dark stripe extending from the eyes to the top of the head. The body is green with a white, cream, or pale-green stripe along each side. The underneath is often whitish and there may be red dots on the breathing pores along the sides. If disturbed, caterpillars drop suspended by threads of silk. Fully developed caterpillars also lower themselves on silk threads to pupate in the litter layer or just under the surface of the soil. 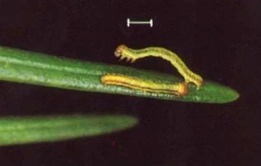 At Rotorua, in the central North Island, there are probably several overlapping generations, for moths can be caught throughout the year, although numbers are greatest between November and mid-March. Further south it is possible that there may be two definite generations which produce adults in winter and then again in early summer with none at other times of the year.

Control
Populations are presumably kept in balance by various natural agents. The tachinid fly Pales feredayi (Hutton) and the braconid Aleiodes declanae van Achterberg is known to parasitise the caterpillar, and there are doubtless other species which are parasitic on this looper. Insecticidal treatment in forests has never been contemplated since the looper has never been a problem. Should control on specimen trees ever be necessary any insecticide suitable for leaf-eating insects should be satisfactory.