Forest and Timber Insects in New Zealand No. 35: Huhu beetle. 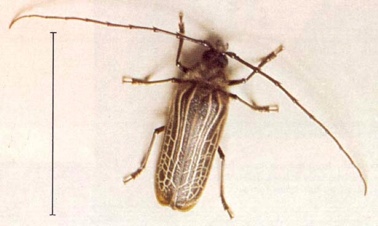 Type of injury
The huhu beetle, the largest beetle in New Zealand, infests logs, stumps, dead parts of living trees, and untreated sawn timber. However, successful larval establishment is dependent on high moisture content of the wood. Preservative-treated timber may show initial boring by larvae. Egg batches (Fig. 2) may be found beneath loose bark, in the exit holes of insects, between boards and beneath the fillet line in sawn timber. The young larvae, after hatching, enter the timber beneath the egg mass, making small oval holes (1 mm in greatest dimension) (Fig. 3). In heavily infested material the mines of older larvae form a maze of intermingling galleries in both sapwood and heartwood. These larvae ingest all the wood they excavate from the tunnels and deposit it behind them as packed faecal pellets. 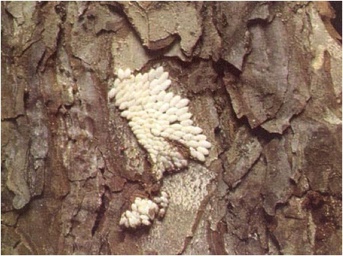 Fig. 2 - Eggs of the huhu beetle. The flake of bark under which they were laid has been removed. 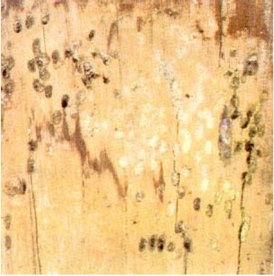 The larvae eventually completely destroy the host wood leaving only a thin outer shell (Fig. 4). Large oval holes, 10-20 mm in greatest dimension, in the outer surface of the host are cut by the beetles as they emerge from their pupal cells.

Hosts
This insect is  commonly found in a wide range of native and exotic softwoods. Partially decayed hardwoods, including Acacia, Eucalyptus, Beilschmiedia, Liquidambar, Nothofagus and Populus are also utilised. Of the introduced softwoods Pinus radiata (radiata pine) has become an important host.

Distribution
The huhu beetle, a native insect, occurs throughout New Zealand from sea level to 1400 m a.s.l. in all forests from the very wet (e.g. South Westland rimu) to the very dry (e.g. Canterbury radiata pine).

Economic importance
Logs left overnight in the forest after felling can be attacked in the spring and summer months. Huhu damage may limit the time available for the salvage of windthrown and fire-killed trees. Infestations in the heartwood of trees are not uncommon, larval entry occurring through wounds and dead branch stubs.

In timber yards (close to forests from which beetles may fly) eggs are laid between boards in block-stacked timber or under the fillet line when conditions are moist. Timber treated with preservatives is often damaged by larvae penetrating up to 10 mm into the wood before feeding commences and they die. The insect may complete its development in untreated timber in damp conditions, often causing severe damage.

Export logs and sawn timber on which there are eggs must be fumigated before shipping, but if larvae have entered the wood then export is banned.

Despite these problems this insect is beneficial in forests because it accelerates the breakdown of waste logs, stumps, and debris.

Description, life history, and habits
The adult is a longhorn beetle up to 50 mm long (Fig. 1). The head which is directed forward and down, bears conspicuous jaws and has a pair of thread-like antennae reaching about midway down the elytra (wing cases) in the female and beyond the elytra in the male. Each antennal segment, except the terminal one and the two nearest the head, has a spine at its end. These spines are more pronounced on the segments close to the head and are longer in males than in females. The thorax is covered with dense pale brown hair and the first segment bears two pairs of spines at the sides, the front pair being considerably larger than the rear ones. The elytra are dark brown with a net-like pattern of pale (or whitish) veins. On the rear of each elytron there is a small spine on the inner margin.

The mature larva (Fig. 5) is robust and cylindrical in general form, 50 to 70 mm long tapering slightly towards the rear. The head, which is partially enclosed by the prothorax, is about as wide as it is long and bears a pair of shining black triangular jaws. The prothorax has a pair of raised white shining patches on its underside. The legs are well developed compared with those of the larvae of most other longhorn beetles. There is a large breathing pore on each side of the thorax, and a smaller one on each side of all abdominal segments except the last. 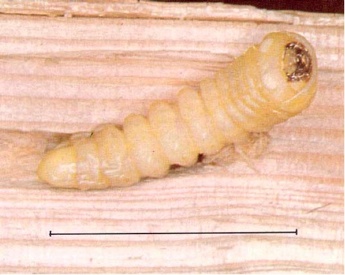 Fig. 5 - Larva of huhu beetle (underside). Note the two white patches close to the head by which the larva can be identified. The line shows natural length.

Groups of 10 to 50 eggs cemented together by a clear secretion are laid in crevices, under loose bark, or in holes of timber insects. The cigar-shaped eggs which are about 3 mm long hatch after three to four weeks. Although establishment of newly hatched larvae depends on moist conditions, later larval stages can continue development in seasoned timber providing the moisture content does not drop below 25%.

The number of larval moults has not been determined but the larval stages commonly extend over two or three years. The duration of development varies with temperature, moisture content, and nutritive value of the wood.

The pupal cell (Fig. 6) made by the fully grown larva may be found anywhere from just beneath the bark to 100 mm below the wood surface with its open end plugged with coarse strands of wood. Pupation is completed in about 25 days. A few days later the adult cuts an exit hole to the surface. The main emergence period is from November to early March, with greatest numbers appearing between mid December and late February. The beetles are strong nocturnal fliers and are attracted to lights. Adults do not feed but survive for about two weeks. Reinfestation of old logs occurs and populations of this insect may occur in such material for many years. 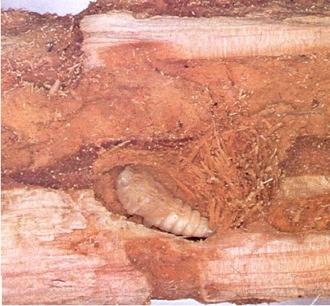 Control
Export logs and sawn timber on which eggs are detected are fumigated with methyl bromide. Although mice, hedgehogs, white-backed magpies, moreporks, sparrows, and wild pigs are known to feed on this insect, their effect on total numbers of huhu in the forests is probably insignificant. Huhu population levels are more likely to be related to the availability of softwood hosts.