Bark beetles in the genera Dendroctonus and Ips (Curculionidae: Scolytinae) are generally considered to be the most serious insect pests of coniferous forests in the Northern Hemisphere; many species are capable of attacking and killing healthy trees. There are about 20 species of Dendroctonus — two species are native to Europe/Asia, and the remainder are found in North America. There are about 65 species of Ips including 26 species in North America.

Most species of Ips breed in slash or in broken, fallen, or dying trees but some species, under favourable conditions and when numbers are great enough, are capable of making successful primary attacks on healthy trees. 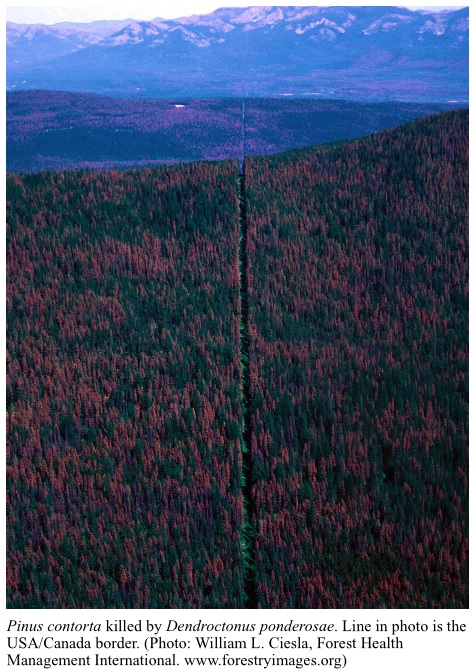 There has been an outbreak of Dendroctonus ponderosae in British Columbia going on for several years now.  In 2002 alone the beetle infested over 785,000 hectares of Pinus contorta and killed over 70 million cubic metres of trees.  The cost to the economy of British Columbia is reckoned in billions of dollars. Dendroctonus and Ips spp. are common interceptions at New Zealand ports. In the period 1952–90 four species of Dendroctonus and 17 species of Ips were found in wood packing material, dunnage logs, etc., imported into New Zealand. These comprised 191 interceptions. About one-third of the insects were alive when intercepted (Ensis BUGS Interception Database). However, the likelihood of detection of the life stages by visual inspection of the host material on importation is high if the bark is removed during examination, and the use of kiln-dried wood or wood with no bark attached eliminates the risk.

These bark beetles, and indeed scolytine bark beetles in general, have demonstrated an ability to establish outside their native ranges. Dendroctonus micans , a European/Asian species that is a serious pest of Picea , has become established in the United Kingdom since it was first found there in 1982. Dendroctonus valens , a North American species that attacks Pinus and occasionally other conifers, was first found in China in the mid-1980s and has killed more than 10 million Pinus tabulaeformis trees there. Dendroctonus valens is considered to be one of the less aggressive species of Dendroctonus in North America; however, the extensive damage that it is causing in China exemplifies the difficulty of predicting the behaviour of an organism in a new environment, particularly when that organism is associated with a new host. 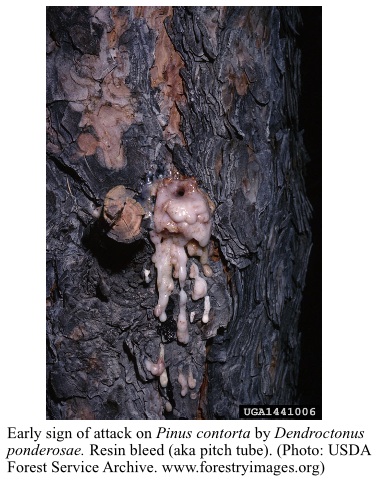 Ips grandicollis , a North American species that infests Pinus, has been established in Australia since 1943 and has been responsible for much mortality in Pinus radiata plantations there, particularly those on drier sites. Ips grandicollis has been the most frequently intercepted species of Ips at New Zealand ports (50 times) and 40% of these interceptions have been from Australia.

Four species of Dendroctonus (ponderosae, rufipennis, pseudotsugae, and valens) are listed as regulated pests in Biosecurity New Zealand’s list of “Biosecurity Organisms Register for Imported Commodities” (BORIC). Fifteen species of Ips are listed as regulated pests in BORIC. Should a species of Dendroctonus or Ips become established in New Zealand, pheromones are available for a lot of species and they could be deployed to monitor the insect’s distribution and therefore greatly increase the chances of eradication if the detection was made early enough.