Spread of Paropsis charybdis parasitoids into the South Island

Paropsis charybdis (Chrysomelidae), an introduced Australian species, is the most important defoliator of Eucalyptus spp. in New Zealand.The parasitoid wasp Enoggera nassaui (Pteromalidae) was introduced to New Zealand as a biological control agent of P. charybdis in 1987 and 2000. In 2001 two additional parasitoids, both new self-introduced species, were reared from P. charybdis eggs collected in the central North Island (FH News 117, April 2002). The first, Neopolycystus insectifurax (Pteromalidae) is a primary egg parasitoid of P. charybdis like E. nassaui. This wasp was expected to complement control provided by E. nassaui, and an unsuccessful attempt had even been made to introduce it in 1987. It was later discovered that the specimens released in 1987 were not N. insectifurax but an unidentified species. 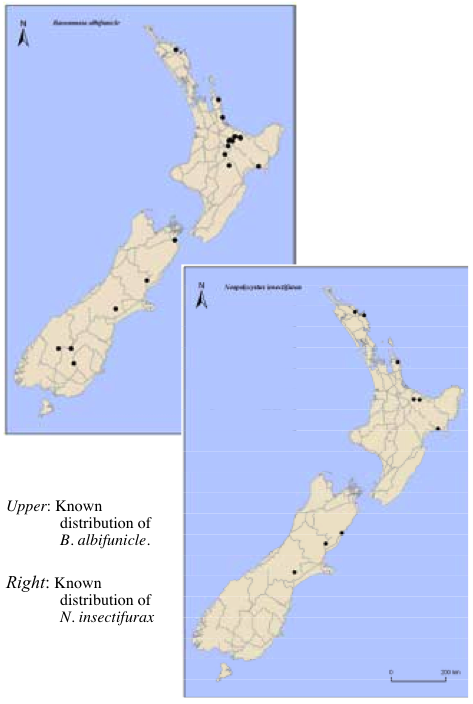 The appearance of N. insectifurax in 2001 stimulated renewed confidence in the biological control of P. charybdis. Unfortunately, the second self-introduced species recovered in 2001 was identified as an obligate hyperparasitoid of E. nassaui. Baeoanusia albifunicle (Encyrtidae) had the potential to disrupt the control of P. charybdis by parasitising eggs already parasitised by E. nassaui, effectively preventing E. nassaui from successfully reproducing. It was soon realised, however, that N. insectifurax was immune to the hyperparasitoid and might have some capacity to compensate for a hyperparasitoid-driven decline in E. nassaui. As it became evident that the dynamics of the biological control of P. charybdis were changing in the central North Island where all three parasitoids were present (see FH News150, April 2005), plans were made to assess the distribution of each species to determine what other areas might be similarly affected.

Field surveys were conducted in the South Island between December 2007 and January 2008, and P. charybdis eggs were sought and assessed for parasitism by E. nassaui, N. insectifurax, and B. albifunicle. Several North Island regions where parasitoids had not been officially recorded were also surveyed, and the Scion Forest Health Database was searched for distribution records of all three species. Field survey and database results were combined to produce distribution maps for each species.

Enoggera nassaui was recovered from most sites surveyed in the South Island. It has now been found in 20 of the 29 regions of New Zealand (as defined by Crosby et al. 1998) from Northland to Southland. Regions where it has not been recorded represent those which have not been surveyed specifically for its presence (Taranaki, Rangitikei, Wanganui, Wairarapa, Fiordland, and Stewart Island) and three regions (Hawke’s Bay, South Canterbury, and Mackenzie) where P. charybdis eggs could not be located during the current survey.

Both N. insectifurax and B. albifunicle were recorded for the first time in Northland, on the east coast of the North Island, and in the South Island. This represents a wide latitudinal distribution and it is unlikely that either species is particularly limited by climate. That said, however, unlike E. nassaui, neither N. insectifurax nor B. albifunicle have been found in surveys of Southland as recently as March 2008, so it is possible there is a climatic limitation here.

Enoggera nassaui is still a significant control agent of P. charybdis in New Zealand, but N. insectifurax and B. albifunicle appear to be altering the seasonal patterns of this control and the new situation has yet to reach equilibrium. If B. albifunicle is able to reduce the abundance of E. nassaui it may exacerbate the poor level of control of the first spring generation of P. charybdis which sometimes occurs in the central North Island. As the hyperparasitoid is also present in the some parts of the South Island, similar patterns may also occur there. Fortunately N. insectifurax seems to have established well on both North and South Islands and there is evidence it might be beginning to dominate over E. nassaui later in summer, and so control of the second annual generation of P. charybdis may be maintained.