Forest and Timber Insects in New Zealand No. 2. 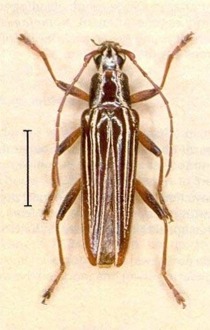 Type of injury
Only living trees are attacked by Coptomma lineatum. The larvae mine down the centre of twigs and small branches of mature trees and the stems of young trees. Frass, or bore dust, may be seen dribbling from small holes at intervals along an infested branch. Branches are often deeply girdled before the larva pupates in the centre.

Hosts
This native insect attacks a wide range of indigenous and exotic trees and shrubs, including regeneration of Nothofagus spp. (beech) and podocarps. The leaders of young Pseudotsuga menziesii (Douglas fir) and the branches of larger trees are often attacked.

Distribution
Coptomma lineatum is widely distributed in the North Island and is found in Nelson and the Marlborough Sounds in the South Island.

Economic importance
This insect is considered to be of some importance in forestry as attack frequently kills the leading shoots of certain species of trees, especially Douglas fir. This can result in malformed trees or trees with multiple leaders. Larval galleries in the branches of Douglas fir can also extend in to the tree's main stem, resulting in degrade in sawn timber (Fig. 2). 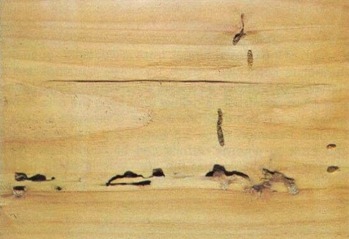 Description, life history, and habits
The adult of C. lineatum is a longhorn beetle, distinct and striking in appearance (Fig. 1). It is red-brown to black with three longitudinal white stripes on each elytron (wing case). Two stripes continue forward over the thorax and head. The body, 15-25 mm long, tapers to the front and rear from the shoulders of the elytra. The larvae of C. lineatum can be up to 38 mm long, are cylindrical and white, and have gouge-like jaws. Protruberant folds of tissue (ampullae) are present on the upper and lower surfaces of the thoracic and abdominal segments.

Fig. 3 - Tunnel in small branch made by larva of C. lineatum.

The eggs are usually laid under bud scales on twigs. When the larvae hatch they bore under the bark and cut a downward spiral track before entering the centre of the stem (Fig. 3). They cut small holes to the surface along the length of the central tunnel, frass is ejected through these holes, and the tunnel is kept clear. Such frass-free workings are typical of longhorn larvae that tunnel in living wood and stems. Before pupating, the mature larva often constructs a gallery encircling the twig or branch. The pupal chamber in the centre of the branch is plugged at both ends with shredded wood. Pupation takes 2-3 weeks and the adults cut their way through the bark to emerge. Adults can be found from November to January, and it is probable that the life cycle is completed in one year.

There is some evidence that branches, especially Douglas fir, which bear scars made by cicadas when egg-laying, are particularly susceptible to attack by C. lineatum. On the other hand, totara recovers well from cicada damage and appears immune to C. lineatum, and in rimu girdling by C. lineatum occurs below cicada scars where green foliage indicates normal sap flow. This suggests that C. lineatum is not necessarily dependent on damage by other insects.

Control
No control measures are carried out against this insect.