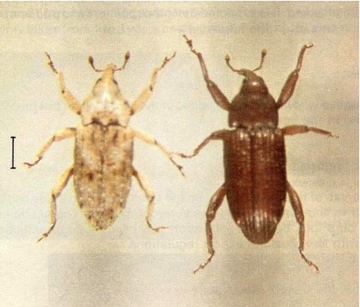 Type of injury
The larval tunnels of the longnosed kauri weevil are extremely irregular in size and shape, and create a honeycombed appearance in severely infested wood. They may penetrate deeply into the sapwood and are usually packed with clay-like frass. Exit holes are round and 2-3 mm in diameter. Only moist or wet wood is affected.

Conifers are the main hosts and there are records from Cupressus spp., Dacrydium cupressinum (rimu), Juniperus chinensis, Pseudotsuga menziesii and Sequoia sempervirens. There are a few records from
hardwoods including Acacia, Eucalyptus and Pittosporum.

Distribution
This native weevil occurs throughout most of New Zealand.

Economic importance
The larvae of this insect may damage slow-seasoning poles and posts stockpiled in the forest during the summer months. The sheltering of adults in pine logs destined for export has necessitated fumigation to conform with New Zealand export regulations.

Description, life history, and habits
The adult (Fig.1) when freshly emerged is pale yellow to brown or grey because of the numerous scales covering it. These are of two types: short rounded scales which lie flat covering the whole body and legs, and elongated scales which are more upright dotted at regular intervals along the elytra (wing cases) and legs. These scales readily become rubbed off exposing the dark red elytra.

The snout, which curves downward, is about as long as the prothorax and bears a pair of distinctly elbowed antennae attached near its mid-point. The prothorax is finely punctured and constricted in front, widening out to the elytra. The elytra are wider than the prothorax and nearly parallel for about three-quarters of their length, then become rounded. There is a rounded protruberance on the rear slope of each elytron. Regular rows of punctures are evident on abraded specimens. The insect is 6 to 9 mm long and 2 to 3 mm wide.

The larva is a small, white, C-shaped grub with no legs and a yellowish brown head capsule (Fig. 2).

The eggs are usually laid singly in small pits cut in the bark by the female, or beneath the bark at the edges of damaged areas where the sapwood has been exposed. Attack is confined to very moist wood which appears essential to successful larval development. The larvae honeycomb the sapwood (Fig. 3) with a network of tunnels, often working backward and forward enlarging certain sections. Larval development probably takes from 1 to 3 years and reinfestation of suitable wood is likely. 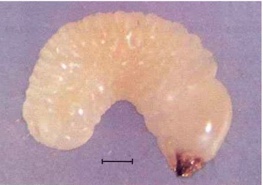 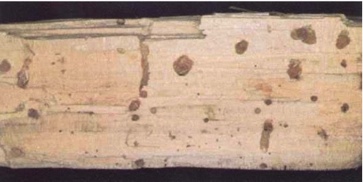 The adults, which are abundant between January and April, may be found in large numbers in localised areas beneath the bark of logs and stumps, and under logs. A period of aggregation occurs, probably associated with mating. On one occasion 300 to 500 beetles per stump were recorded. No subsequent larval infestations have been found in the material on which the large numbers of adults were noted.

Control
No control measures are used against this insect except for the fumigation of export logs when necessary.