Melolonthine beetles in forests - grass grub and other chafers

Forest and Timber Insects in New Zealand No. 43: Melolonthine beetles in forests - Grass grub and other chafers.

Type of injury
Larvae of melolonthine beetles feed on roots. The adults eat foliage (Fig. 2 and 3), and to a lesser extent young green twigs. 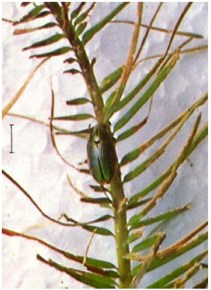 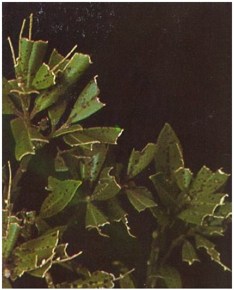 Hosts
The subfamily Melolonthinae includes the grass grub beetle, Costelytra zealandica (White), whose larvae, although feeding primarily on roots of grasses and other pasture plants, to a certain extent also eat the roots of many other plants including those of trees. However, most melolonthine larvae are not associated with grass, but subsist on the roots of various herbs, shrubs, and trees in a variety of situations ranging from subalpine scrub to forests and coastal sand dunes.

Adult melolonthines chew the foliage of a wide variety of plants including many ornamental trees and shrubs, and fruit trees. Exotic forest trees commonly damaged by C. zealandica and several other melolonthine beetles are Larix (larch), Pinus (pine), and Pseudotsuga menziesii (Douglas fir).

Distribution
These native insects are found throughout New Zealand. Costelytra zealandica has by far the widest distribution, being present over virtually the whole country except the alpine areas. Others have more or less restricted distributions although a few, such as Pyronota festiva (F.) (manuka beetle) which is primarily associated with Leptospermum (manuka), are almost as widespread as C. zealandica.

Economic importance
The majority of melolonthines are of no known economic significance. The exceptions are C. zealandica and a few others which are primarily very serious pasture pests, but their significance to forestry is generally limited to forest nurseries where heavy losses of tree seedlings can occur if the insects are not controlled by the application of insecticides. Larvae of C. zealandica have often been considered responsible for losses amongst pines recently planted in pasture land, but experience at Scion (New Zealand Forest Research Institute Ltd) indicates that they are not a significant cause of mortality.

Adult feeding damage on the needles of conifers can sometimes be spectacular as the heavily attacked trees appear reddish. Such damage, which is often quite localised and not usually significant, is most prevalent in areas adjacent to manuka scrub, where it is usually caused by Pyronota festiva, and in Douglas fir stands, especially at the margins, where it is generally one or more of the several species of Stethaspis that are responsible.

Description, life history, and habits
There are about l00 species of melolonthines (or chafers) in New Zealand and identifying most of these is best left to specialists. Most of the beetles are similar in shape. They are roughly oval in outline but the rear end is wider than the head; they are stout, robust and decidedly convex when seen from the side. The elytra (wing cases) do not completely cover the abdomen so that a small terminal portion is left exposed. The antennae are relatively short (compared with those of other beetles) and are usually held beneath the head so they are not generally visible; the end segments are flattened finger-like plates (Fig. 4). 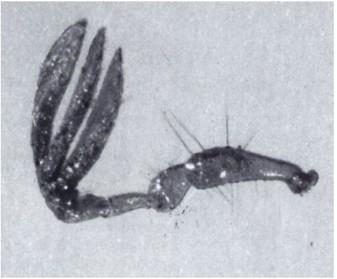 Nearly all melolonthines commonly found in forests or forest nurseries belong to four genera (Fig. 1 ). Stethaspis are large green beetles 13-24 mm long, while the small (6-8 mm), more common, green species are of the genus Pyronota. In some parts of the country, particularly the northern part of the North Island, colour variants of Pyronota are quite common. These variants can be red, blue, orange, less commonly purple, and sometimes even black. Brown melolonthines (length 8-18 mm) mostly belong in the genera Costelytra and Odontria . Nearly all Odontria have a dull velvety appearance whereas all Costelytra are shiny. Also Costelytra have narrow raised longitudinal ridges on the elytra; Odontria do not (Fig. 5). 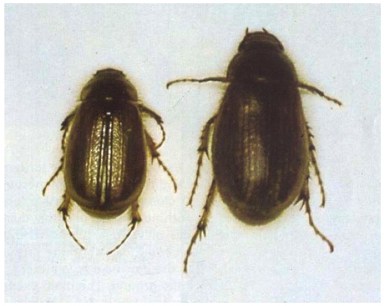 The larvae of the different species are all basically similar. They are creamy-white with a prominent head and relatively large legs. The rear part of the abdomen is usually darkened as a result of the gut contents showing through the body wall. They lie in a characteristic C-shaped position in the soil (Fig. 6). Full grown larvae of most species of Costelytra, Odontria, and Pyronota are approximately 15-20 mm in total length while mature larvae of Stethaspis are up to 45 mm long. 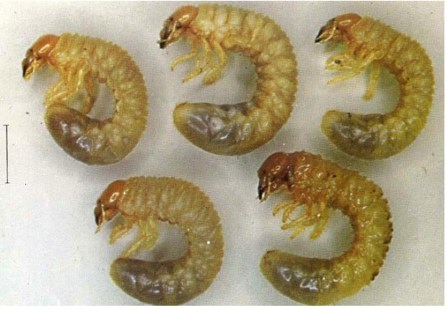 Adult C. zealandica are generally found from October to January, and sometimes later. In the central North Island they are most numerous towards the end of November. Some species of Odontria in our native forests fly in autumn and early winter. Most melolonthines fly at, or after, dusk and are commonly found feeding on the foliage of various plants. They are most abundant on warm calm evenings and feeding can continue throughout the night if conditions are favourable. During the day the adults either burrow into the soil or conceal themselves close to the ground. The main exceptions are adult Pyronota, which fly during the day and are particularly abundant on bright sunny days.

The life history of only a few melolonthines is known in any detail. The following refers to C. zealandica. The eggs are white and oval (approximately 1.5 by 2.0 mm). Batches of about 10-40 are laid in the soil near roots of grasses and other plants, at depths of up to 180 mm but more usually at about 80 mm. They hatch in 1-3 weeks, depending on the temperature and how much moisture is in the soil, and the young larvae begin feeding on the plant roots. Most larvae complete their development by August-September and then burrow down to between 100-250 mm and pupate in earthen cells (Fig. 7 and 8). The pupal period lasts 4-6 weeks, after which the adults tunnel to the surface and live for an average of 2-3 weeks. Although there are usually a few larvae in all populations that take two years to complete their development, in the south of the South Island a two-year cycle is normal.

Pyronota probably complete their development in one year, as do many Odontria, but a two-year cycle is normal for Stethaspis and the subalpine species of Odontria. 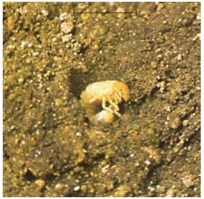 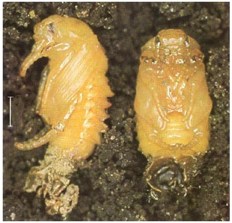 Fig. 8 - Grass grub pupae. The crumpled mass at the end of each abdomen is the cast larval skin.
The line shows natural length.

Control
Control in forestry is not usually necessary, except in nurseries, where this is achieved by the application of insecticides.

Many natural enemies of melolonthines (particularly C. zealandica) have been recorded, including parasitic flies, predatory insects, birds, and viral and other microbial diseases, but none of them exert any significant controlling influence.