Forest and Timber Insects in New Zealand No. 33. A Powder-post Beetle. 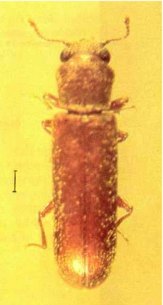 Type of injury
The larvae of Lyctus brunneus bore in the sapwood of seasoned or partly seasoned hardwood timbers. Rare attacks may occur on certain species of Pinus (pine). Tunnels, which are initially longitudinal, later extend in all directions and are loosely packed with very fine talcum powder-like bore dust. Repeated or heavy attack can reduce the sapwood to a mass of powder enclosed by a thin veneer of wood. Round holes, 0.8-1.6 mm in diameter, made by emerging beetles, may be the only visible evidence of infestation (Fig. 2). Frass can sometimes be seen spilling from these holes.

Hosts
Powder-post beetles will attack only the sapwood of hardwoods with medium to large vessels (pores) and a high starch content. Beilschmiedia tawa (tawa) and Knightia excelsa (rewarewa) are the main commercial native timbers that are susceptible; Nothofagus (beech) is occasionally affected. Of the overseas timbers commonly used in New Zealand, Quercus (oak), Fraxinus (ash), Ulmus (elm), and Eucalyptus (eucalypt) are susceptible. Bamboo is also attacked.

Distribution
This beetle was probably indigenous to North America but has been spread by commerce to nearly all parts of the world.

Economic importance
Lyctus brunneus is of little economic importance in New Zealand. The majority of building timbers are softwoods and these are usually immune to attack. The only susceptible timbers used to any great extent are tawa and rewarewa and these are protected by treatment with preservatives, usually boron salts. Some losses do occur in imported hardwoods, especially plywoods, which either are infested in New Zealand or, more usually, were infested in their country of origin.

Description, life history, and habits
The adult (Fig. 1) is a flattened, elongate, reddish to dark-brown beetle 4-7 mm long. The two terminal segments of the antennae are enlarged to form a compact club. The thorax, which is as long as it is broad, has a shallow depression along its mid-line. The parallel-sided elytra (wing cases) have regular longitudinal rows of punctures.

The mature larva is a white, slightly curved grub about 5mm long. It is stoutest at the thorax and has well-developed legs. On either side, near the rear of the abdomen, there is a large spiracle (breathing pore) which is surrounded by a brown oval plate (Fig. 3). This feature helps to distinguish larvae of Lyctidae from those of Bostrychidae and Anobiidae, which are also stout, curved, wood-boring grubs with well-developed legs. Newly hatched larvae are straight, less than 1 mm long, and extremely slender. Intermediate larvae are essentially like mature larvae, but smaller. The translucent white, cylindrical egg is slightly less than 1 mm long and has a thread-like process at one end. 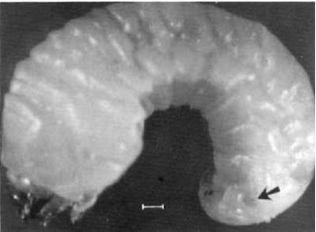 Beetles are usually found emerging from infested timber during October and November. They are sexually mature when they emerge and mating usually takes place at dusk or night soon after emergence. The eggs are laid mostly at night. Before laying eggs females usually bite the wood, but the purpose of this was for long the subject of controversy. The growth of the larvae, which are unable to digest cellulose, depends on the starch and protein contained in the wood cells, and eggs are not laid in sapwood which contains less than about 3% starch. So it was thought that the female was able to estimate starch by biting the wood, thus testing its suitability for larval development. An alternative opinion was that the biting merely exposed more cut ends and vessels in which eggs could be laid. It was also possible that both purposes were served. However, more recent work (Rosel, 1969) has shown that the purpose of the biting is almost certainly only for opening up more vessels for egg-laying.

Larvae emerge from the eggs in about 8-12 days and initially tunnel parallel with the grain but later in any direction (Fig. 4). When fully grown they construct pupal chambers near the surface of the wood. The duration of the pupal stage is variable but it is usually 12-30 days. The beetles tunnel their way to the outside.

Outdoors the life cycle is usually completed in one year but varies depending on temperature, humidity, moisture content, and starch content of the timber. In Australia under optimum conditions the life cycle can be as short as 54-63 days in the wood of Sterculia acerfolia (flame tree) and four generations per year can consistently be produced from Eucalyptus obliqua (Rosel, 1962). Successful larval development takes place only in wood with a moisture content between 8 and 30%. As a rule the higher moisture content is more favourable for larval development.

Control
The small pteromalid wasp Theocolax formiciformis Westwood is the only parasite recorded on Lyctus brunneus in New Zealand. It is also cosmopolitan but is regarded as of little importance in control.

Control measures are not usually necessary for this insect as few susceptible timbers are used untreated. Infested imported material can be either destroyed, fumigated with methyl bromide, or kiln sterilised. Stocks of susceptible imported timber should be examined annually and any infested pieces found either sterilised or burnt. Removal of waste such as off-cuts of timbers that could be potential breeding sites in timber yards and joinery factories will minimise the chances of stocks of susceptible timber being attacked.