Forest and Timber Insects in New Zealand No. 51: Bag moth.

Fig. 2 - Tough silken bag made by caterpillar of the bag moth. Bags can be up to 80 mm long.

Type of injury
The caterpillar of the bag moth eats foliage (Fig. 1). Occasionally twigs may be constricted so tightly by the silk band which the caterpillar makes when attaching its bag that sap flow is restricted and gall-like swellings are caused (Fig. 3).

Fig. 3 - The silk band attaching the bag to a twig may sometimes be so tight that sap flow is restricted and a gall forms.

Hosts
The caterpillar feeds on a very wide range of native and exotic broad-leaved and coniferous shrubs and trees.

Economic importance
The bag moth is present in all forests, but caterpillars are rarely numerous enough to cause noticeable damage. The only record of appreciable defoliation of Pinus radiata (radiata pine) was in Glenbervie Forest, Northland, in 1955.

Description, life history, and habits
The common name of this insect refers to the strong silk bag made as a refuge by the caterpillar. The bag is brown to greyish, often covered with fragments of vegetation, and so tough it cannot be torn open.

The adult male (Fig. 4), which is black and has no markings on the wings, is swift-flying and nocturnal. The forewings are narrow and somewhat darker and less translucent than the hindwings. Wingspan is 28-38 mm. The antennae are comb-like, especially the part close to the head, and the body is covered with fine black or dark grey hairs.

The adult female is a wingless, pale, maggot-like creature with a small head and thorax, and a swollen abdomen. A few yellowish scales are present on various parts of the body. Length is about 25 mm. The female never leaves the bag she made as a caterpillar, and fertilisation occurs by the male inserting the telescopic tip of his abdomen through the opening at the narrow end of the bag. Eggs are laid in the bag, and the female then shrivels and dies.

The caterpillar (Fig. 5) has a pale head speckled with black, the next three segments are dark brown and white, and the rest of the body is generally dark brown. There are three pairs of legs on the thorax and five pairs of "prolegs" on the abdomen; these prolegs have numerous hooklets which hold the caterpillar firmly on to the inside of the bag. 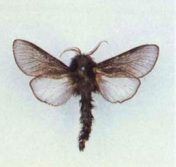 Newly hatched caterpillars emerge by the opening at the tip of the bag, wander actively over the host plant, and can drop down to other branches by suspending themselves from silken threads; during this process they may be dispersed by the wind. Within about three days each caterpillar constructs a conical case of silk and leaf fragments around its abdomen. Initially this "bag" is held almost upright as the caterpillar walks, but the caterpillar continues to add silk to the front of the bag and eventually the bag becomes so large it has to hang vertically or be dragged along (Fig. 2): Fully grown caterpillars can have bags up to 80 mm long and 9 mm in diameter at the widest part.

The bag has two openings; one at the front through which the caterpillar protrudes its head to feed, and a smaller one at the narrow end through which faeces fall. The caterpillar usually feeds at night. It moves with its head and thorax out of the bag and grips the plant with its thoracic legs. It can also let itself down, bag and all, from branch to branch by silken threads. If alarmed the caterpillar rapidly retracts its head and draws closed the front opening of the bag. During the day the entrance is usually closed and the bag hangs suspended, attached to a twig by a loop of silk.

When the caterpillar is due to pupate it fastens its bag to a twig with a strong band of silk, closes the front end tightly, and twists the narrow end so that the opening there is also closed. Pupation usually occurs during the winter.

In spring and early summer the male pupa forces its way through the former opening at the narrow end of the bag, and projects the front part of its body. It is prevented from falling out by spines on the abdomen. The front end of the pupa then splits open, and the moth which emerges clings to the outside of the bag until its wings have expanded and dried. 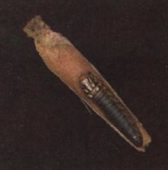 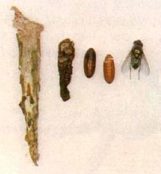 Fig. 6 - Contents of a bag containing a caterpillar parasitised by a tachinid fly. From left to right.
bag, shrivelled remains of caterpillar, pupal case from which fly has not yet emerged, empty pupal case, and tachinid fly (x1.5).

Control
Bag moth caterpillars are heavily parasitised and well controlled by the tachinid flies Pales feredayi (Hutton) and P. marginata (Hutton). Eggs laid by these flies on foliage are swallowed by the caterpillar and hatch in the digestive tract. The larvae migrate through the gut wall, feed on body tissues, and when the host dies leave the body and pupate inside the bag (Fig.6). As many as 27 flies have been found within a single bag. They presumably leave by the opening at the narrow end. Other recorded parasitoids are the white-spotted ichneumonid wasp Ecthromorpha intricatoria (F.), which lays its eggs into the pupa, and the ichneumonid Xanthopimpla rhopaloceros Krieger. Insecticidal treatment has never been contemplated in forests. Should it ever be necessary on specimen trees any insecticide suitable for leaf-eating insects should be satisfactory.