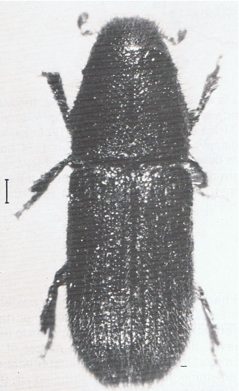 Type of Damage
Hylurgus ligniperda breeds in the inner bark of recently felled logs (especially those in contact with the ground), in stumps, and in the roots and bases of dead trees. Neither adult nor larval tunnels engrave the sapwood except in very small-diameter material. Reddish frass (bore dust) is expelled from the adult tunnels and is found throughout the workings in the inner bark.

Hosts
This beetle is apparently restricted to Pinus (pine). In New Zealand it is found mainly in Pinus radiata.

Distribution
Hylurgus ligniperda is widely distributed in Europe, the Mediterranean area, and Atlantic islands and is established as an introduced species in Japan, parts of South Africa and North and South America, Sri Lanka, and southern Australia. It was first discovered in New Zealand in 1974 near Whitford, south of Auckland.

Economic Importance
Hylurgus ligniperda breeds in logging wastes, stumps, roots and logs of harvested pine species (Reay & Walsh 2001). The damage to the wood is unimportant, except perhaps for its association with a minor degree of sapstain in the outermost sapwood of logs. However, its presence in export logs is a market access issue, and requires treatment under the International Plant Protection Convention 1997. Infested logs must either be refused for export, or be fumigated immediately before shipping. Currently methyl bromide is used for fumigation, but this is likely to be phased out in the near future (Pawson et al 2009).

Garcia de Viedma (1964) reports that in Spain pines up to 15 cm in diameter may be ringbarked and killed when, during the winter, groups of 30-40 adult Hylurgus ligniperda make communal galleries in the larger roots and the root collar. Damage of this sort has not been reported elsewhere, either overseas or New Zealand. 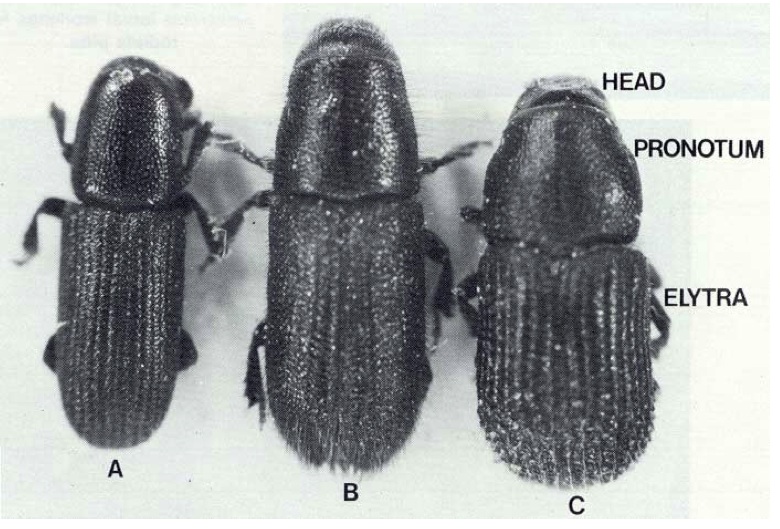 Fig. 3 - Three beetles which may be mistaken for each other: (A) Hylastes ater, (B) Hylurgus ligniperda, (C) Pachycotes peregrinus. Note differences in shape of rear edges of pronotum.

The fully grown larvae are white, slightly C-shaped, legless grubs with yellowish-brown head capsules. Those of Hylurgus ligniperda are about 7-8 mm long and 2 mm wide. They are larger than Hylastes ater larvae and have two, almost circular, dark protruberances on the front of the head above the jaws (Fig. 4). Smaller larvae are similar, except that the body wall is more transparent, and the reddish contents of the gut, are visible. The protruberances on the front of the head can be seen, with the aid of a hand lens, in larvae that are about half-grown. 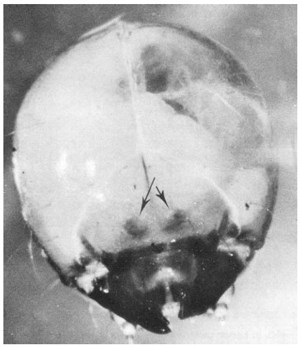 Life History and Habits
The brood gallery, which is initiated by the female, consists of a short entry tunnel leading to an oblique nuptial chamber in the innermost bark. From this nuptial chamber the female constructs a long egg-gallery, usually parallel with the grain. The egg-gallery can be up to l m long and is not always straight (Fig. 5); it often meanders and sometimes doubles back on itself. The female is invariably found at the end of the tunnel and the male is usually found a short distance from the nuptial chamber and may assist in gallery construction by pushing out frass. Males have been observed to make short feeding tunnels branching off from the nuptial chamber or the egg-gallery. Sometimes two males have been found in the galleries, and nearly always this was before the eggs had hatched. 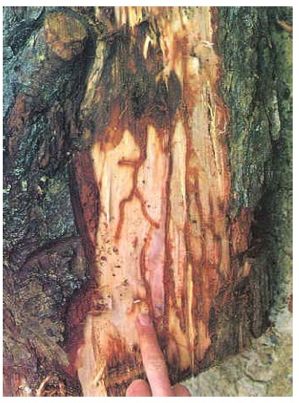 The eggs are laid in notches cut in the walls of the egg-gallery and covered with frass. They are laid over a period of at least six weeks and periods of egg-laying are interspersed with periods of feeding. Eggs are laid along approximately 100-200 mm of egg-gallery, the female will then extend the gallery for about another 200 mm and lay more eggs, and so on. As a result, the larvae tend to be found in groups - mature or nearly mature larvae near the nuptial chamber, then groups of successively smaller, even-sized larvae at intervals along the tunnel, and finally eggs just behind the female which may still be extending the gallery. The average number of eggs laid per female has not been determined. Eggs laid over the summer months hatch in about two weeks.

The larval galleries are initially at right angles to the egg-gallery but they soon become random so that they make no distinctive pattern. There are apparently four larval stages and when the larvae are fully grown they pupate at the end of their tunnels. The pupal stage lasts somewhat less than two weeks. During the summer months, development from initiation of brood galleries to the first appearance of teneral (newly-formed) adults takes 10-11 weeks.

Control
Larval competition for food is probably the most important factor in limiting numbers. No parasites or predators have been recorded in New Zealand.

Green sawn timber intended for export may be protected by the addition of an insecticide to the antisapstain bath or spray. Infestations in export logs may be minimised by:

Monitoring of H. ligniperda (and other wood-boring and bark beetles) can be conducted using Lindgren funnel traps with lures of alpha-pinene and ethanol (Brockerhoff et al 2006).