Type of injury
Adults of Hylastes ater feed in the inner bark of recently felled logs, especially when these are in contact with the ground, and also in the bark around the root collar of seedlings. Although the beetles are reported to kill newly planted stock and sometimes natural regeneration after clear-felling of forest stands, recent work suggests that healthy seedlings survive attack. In such seedlings the wounds in the major roots and the stem below ground are encrusted with resin (Fig. 2). 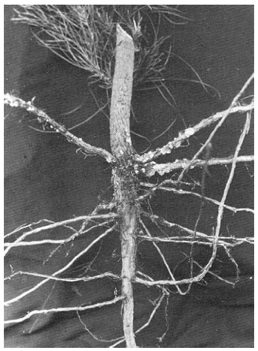 Brood galleries are made mostly in the roots of stumps and dead trees but also occur at the bases of dead trees and in logs in contact with the ground. Neither adult nor larval tunnels engrave the sapwood except in small diameter material. Reddish frass is expelled from adult tunnels and is found throughout workings in the inner bark.

Distribution
Hylastes ater is widely distributed in Europe, including Britain, and is also established as an accidentally introduced species in Australia, New Zealand, Chile and South Africa. In New Zealand it is found throughout both the North Island and the South Island wherever exotic coniferous forests occur.

Economic importance
Infested logs for export must be fumigated immediately before shipping under the International Plant Protection Convention 1997. Currently methyl bromide is used for fumigation, but this is likely to be phased out in the near future (Pawson et al 2009). Green sawn timber for export may have to be fumigated or kiln sterilised if adults which have been attracted to the freshly sawn wood are present on its surface. Sapstain fungi are transmitted by the beetles to the outer sapwood of logs but rarely penetrate significantly unless there is abnormal delay between felling and sawing.

If losses reported during re-establishment of pine cut-overs are in fact attributable to Hylastes ater (Forestry Commission 1924, 1946; Zondag 1965), then the feeding by adults in the bark of seedlings is important. However this is questionable. Several writers have observed that the quality of nursery stock and its treatment prior to and during planting affect its susceptibility to damage by Hylastes ater (e.g., Munro 1917 and Clark 1932). In addition, losses of recently planted stock, supposedly caused by this beetle, vary greatly between forests and are not obviously related to the level of insect populations, the quality of nursery stock, or standards of care in planting. Losses tend to be minimal where climates and soils favour early root growth, and most severe in cold climates where soils remain wet and poorly aerated for an appreciable time after planting.

If Hylastes ater succeeds in killing debilitated seedlings, a great variety of basic causes maybe involved which will not always be discernible after the plants are dead. Whether temporarily weakened stock would have recovered but for the intervention of Hylastes ater can be determined in field experiments by comparing the survival of untreated stock and that of stock fully protected by insecticidal treatments. Even then the difference in survival must be attributed not to the protection from Hylastes ater alone but also to the exclusion of other injurious insects. Although controlled experiments have not been carried out under a sufficient variety of circumstances to determine fully what effect Hylastes ater has on the survival of planted stock, trials at Eyrewell Forest in Canterbury and at Karioi Forest in the central North Island strongly suggest that significant losses associated with wounds made by the beetles occur only when the host tissues are so debilitated that they are unable to produce a normal flow of resin in response to wounding.

Description
The beetles (Fig. 1) are about 4-5 mm long and 1.4 mm wide, approximately cylindrical in shape, with sides nearly parallel. They are black except for the antennae and the terminal segments of the legs, which are reddish brown. Newly developed adults are uniformly reddish brown, and in young adults the elytra (wing cases) may retain this colour after other parts have darkened.

When viewed from above, a small part of the head projects beyond the pronotum. The head is directed downwards and is prolonged into a short snout. The pronotum appears shining. This last character is one which helps to distinguish Hylastes ater from Pachycotes peregrinus (with which it is sometimes confused), as in the latter the pronotum appears dull. Hylurgus ligniperda, a European beetle which in 1974 was found to be established in pine forests north and south of Auckland, resembles Hylastes ater more closely than does Pachycotes peregrinus and so is even more likely to be confused with it. Hylurgus ligniperda is somewhat larger than Hylastes ater  - about 6 mm long and 2 mm wide - and much of its surface bears yellowish hairs, which are especially obvious at the posterior end of the elytra. The three beetles are shown in Fig. 3. Brood galleries of Hylastes ater and Hylurgus ligniperda are confined to the inner bark, but those of Pachycotes peregrinus are always found in the wood.

Fig. 3 - Three beetles which may be mistaken for each other:
(A) Hylastes ater,
(B) Hylurgus ligniperda,
(C) Pachycotes peregrinus.
Note differences in shape of rear edge of pronotum.

The egg is less than 1 mm long and about 0.4 mm wide, smooth, shining, rounded at the ends, and with sides nearly parallel.

The mature Hylastes ater larva is a white, opaque, legless, cylindrical, slightly curved grub 5-6 mm long and 1.5 mm wide. The head is yellowish brown, darker around the mouth frame, and the jaws are dark-brown to black. Earlier larval stages are essentially similar but the body wall is transparent and the reddish gut contents are seen through it.

Life history and habits
Brood galleries may be started in any month of the year. Each gallery, which is initiated by the female, consists of a short entry tunnel leading into an oblique nuptial chamber from which issues a single egg-gallery 80-130 mm long and usually parallel with the grain of the wood.

Brood galleries reach but do not engrave the surface of the sapwood.

The male is usually in the nuptial chamber, close to the entrance, and the female is further in towards the egg gallery, but in some chambers the male may be absent. Unfertilised eggs do not develop, but young adults have been observed copulating prior to emergence and females sometimes leave the first brood gallery and start a second one elsewhere, so in these instances the female is presumed to have mated before initiating the nest. Males may assist with gallery construction, at least by pushing out frass from the entrance, and sometimes make short feeding tunnels extending from the nuptial chamber. The successor brood galleries in the absence of males suggest that their part in establishing galleries is only minor. 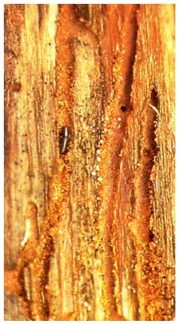 About 100 eggs are laid in individual notches which the female cuts in the lateral walls of the egg gallery (Fig. 4). In Canterbury eggs laid May-August do not hatch until October, and those laid in September hatch in November. Eggs laid October-April hatch from two to eight weeks later, the shorter period applying during the warmest months.

The larvae make feeding tunnels initially at right angles to the maternal gallery, but later these become random in direction and ultimately obliterate both the early larval tunnels and those made by the parents (Fig. 5). The larva passes through four stages of growth, the last being of greatest duration. The rate of development of feeding larvae appears to depend on seasonal temperatures. When fully grown, larvae may pupate in any month of the year. The duration of the pupal stage (6-14 days) varies less with the season than that of other immature stages.

Fig. 5 - Larvae of Hylastes ater under the bark of a pine log.

In Canterbury, development from egg to adult has been found to take from 60 to 300 days. The duration of development is least when eggs are laid at the end of January and the beginning of February and greatest when they are laid about the second week of March. These later broods over-winter as mature larvae and appear to be subject to an arrest of development (diapause) so that they do not pupate until late December. Variations in the rate of development of both feeding and non-feeding larvae cause adults from both fast-developing and slow-developing broods to appear in January.

Emergence does not immediately follow attainment of the adult form, but the time between (again probably varying with seasonal temperatures) has not been investigated. Some adults appear to feed in the material in which they were reared, at least for a time, but the majority probably emerge to feed in fresh material as reserves accumulated during larval feeding become depleted. In fresh host material, groups of about 40 feeding adults (even 120 have been found in a small log) may be present in broad irregularly shaped communal galleries, frequently started from the ends of logs (Fig. 6). Seedlings often support groups of up to 15 adults. Some females initiate brood galleries as extensions of the feeding chamber, but most emerge and select fresh sites elsewhere. 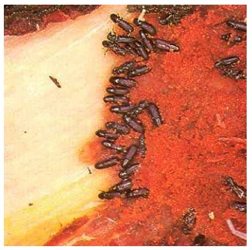 Fig. 6 - Hylastes ater adults feeding under the bark of a pine log.

In September and October, and again in April and May, swarming flights of Hylastes ater may occur. Swarming does not coincide with the times when greatest numbers attain the adult stage, and probably involves many which have been feeding for some considerable time. What initiates swarming, or what purpose it serves, is not understood. It has been suggested that it is associated with local depletion of host material, but this would not seem to apply in those forests where felling continues throughout the year.

Control
No insect parasites or predators are known to occur in New Zealand. A parasitic nematode has been reported but its effects on populations are unknown. In 1933 an attempt was made to introduce into this country three species of Rhizophagus beetles which are predatory on Hylastes ater in Britain but these do not appear to have become established.

Further attempts with natural enemies from Europe were made in 1975 and 1976 when 2 species of a small parasitic wasp, Rhopalicus tutela (Walker) and Dinotiscus eupterus (Walker) (Pteromalidae) were liberated, and in 1977 when the predatory beetle Thanasimus formicarius (L.) (Cleridae) was released.

Only T. formicarius established but its effect on Hylastes populations has never been evaluated, however it is likely to be minimal. Competition amongst larvae of Hylastes ater for food is probably important in limiting numbers, especially when brood galleries are crowded.

Since attacks on healthy seedlings tend to be abortive, any measures such as soil aeration and drainage which improve growing conditions will reduce the amount of damage to recent plantings.

On present information, the use of insecticides, either in the puddle mixture or applied as sprays after planting, is not warranted except for experimental purposes.

Green sawn timber intended for export may be protected by the addition of insecticides to the antisapstain bath or spray. Infestations in export logs may be minimised by:

Monitoring of H. ater (and other wood-boring and bark beetles) can be conducted using Lindgren funnel traps with lures of alpha-pinene and ethanol (Brockerhoff et al 2006).