Forest and Timber Insects in New Zealand No. 41: Gregarious tineid+

+ Common name derived from the superfamily "Tineoidea" (Latin: worm, moth) to which this
insect belongs. 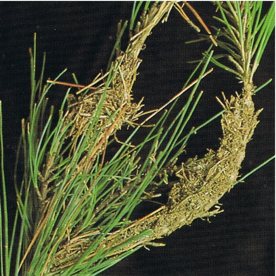 Fig. 1 - Chewed needles of radiata pine webbed together by caterpillars of the gregarious tineid.

Type of injury
Caterpillars of the gregarious tineid feed on the foliage and the bark of young plant shoots and noticeable damage occurs when a number of caterpillars feed together. They construct a strong silken "nest" by tightly binding excreta and chewed leaf material to the foliage of one or more shoots of the host plant (Fig. 1). The nest may be up to 150 x 100 mm in size and foliage and bark within and around it is eaten. Terminal buds may be deformed or destroyed.

Hosts
The caterpillar feeds on a wide range of native and exotic broadleaved and coniferous trees and shrubs including Abies (fir), Picea (spruce), and Pinus (pine).

Distribution
The gregarious tineid is a native insect which occurs throughout New Zealand.

Economic importance
Although conspicuous, the damage caused by this insect in exotic forests is usually unimportant.

Description, life history, and habits
The moth (Fig. 2 and 3) is approximately 8 mm long with a wingspan of 13-16 mm and has whip-like antennae almost as long as the forewing. The antennae of the male are edged with short hairs. The forewing is narrow, dark brown, and irregularly patterned with grey bands. Markings are very variable but often a dark spot edged with grey is present towards the outer wing edge. The brown hindwing is broader than the forewing and is distinctly fringed along the rear edge. The legs are alternately striped with dark and light bands and the abdomen is dark brown. 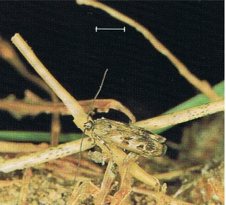 Mature caterpillars are about 15 mm long and generally brown in colour although some may be quite light (Fig. 4). The head is brown with black markings and immediately behind the head the upper surface of the next two segments is shiny, hardened and black. A white stripe extends along the back from the head to the last abdominal segment and separates paired brown spots on each segment. On dark specimens along each side there is also a pair of irregular whitish lines with darkspots between (Fig. 5). Segments without legs have four brown spots on the underside. 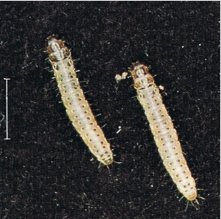 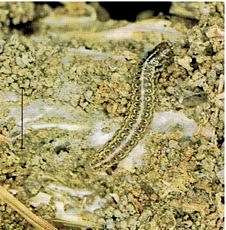 The number of caterpillars per nest is usually proportional to its size (85 have been taken from a nest 100 mm long). Small nests containing one or two caterpillars appear to be more prevalent in the early part of the year. Within the nest a network of silken tunnels allows caterpillars access to feeding sites in and around the nest. If disturbed the caterpillars rapidly retreat along the tunnels or drop to the ground suspended on silken threads. The mature caterpillar constructs a cocoon about itself within the nest and pupates for about three weeks.

There are probably two generations each year, although the adults, which fly during periods of hot sunshine, and visit flowers to feed, are most common in December and January.

Control
Because of its minor economic importance no chemical control of the gregarious tineid in exotic forests has been attempted. Natural regulators of the population are a fungus disease and parasitic insects. Two tachinid flies (Trigonospila brevifacies (Hardy) and Pales funesta (Hutton)); three ichneumonid wasps (Xanthopimpla rhopaloceros (Krieger), Campoplex sp. and Aucklandella sp.) and a bethylid Goniozus sp. have been recorded parasitising caterpillars.

Ornamental shrubs affected can be treated with a thorough spraying of an insecticide recommended for chewing insects.