Forest and Timber Insects in New Zealand No. 24. Greenhouse Thrips.

Fig. 1 - Radiata pine foliage attacked by greenhouse thrips. Note the general silvery appearance of older needles compared with the normal green colour of new growth which has not yet been attacked.

Type of injury
The greenhouse thrips, Heliothrips haemorrhoidalis, uses its mouth-parts to rasp the leaf surface, rupture the epidermal cells, and feed on exuding cell contents. Feeding spots turn yellow then brown, and the surrounds become silvery where air enters the emptied cells (Fig. 1). Excrement produced by the insects hardens into tiny dark spots on the foliage (Fig. 2a & b). Where large numbers of thrips have been feeding the affected areas coalesce, giving the whole foliage of the plant, or considerable portions of it, a silvery-grey appearance (Fig. 3). Severely attacked leaves may dry out, turn brown, and fall. 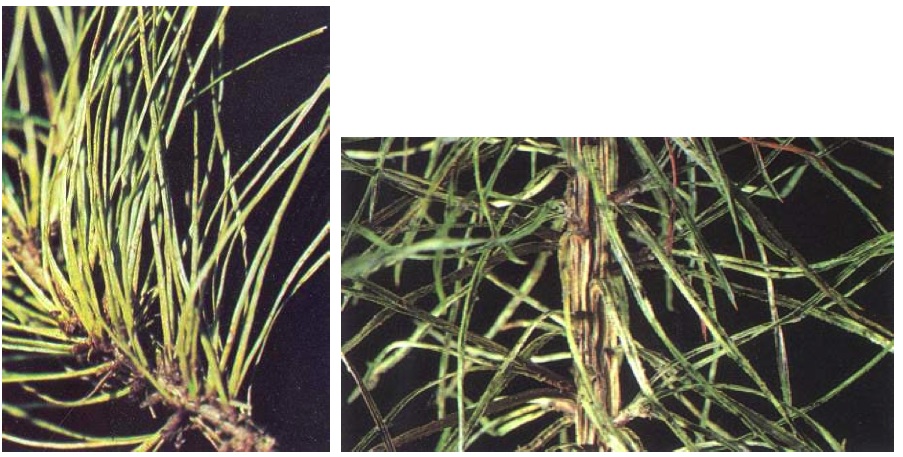 Fig. 2a & b - Close-up of radiata pine foliage attacked by the greenhouse thrips.

Hosts
The plants attacked by this insect are too numerous to list. It is found on both hardwood and softwood trees and shrubs, on many garden plants, and on various weeds.

Distribution
This widely-distributed species is present mainly in warm climates throughout the world, but also occurs as a greenhouse pest in colder regions such as northern Europe and Canada. Originally from Brazil, but introduced accidentally into New Zealand in 1930, it occurs in outdoor conditions in the North Island and the top third of the South Island.

Economic importance
On pole size and slightly larger Pinus radiata (radiata pine) and on young Pseudotsuga menziesii (Douglas fir) the lower, shaded foliage may become affected, but this is of little importance and usually indicates that the trees are in need of pruning and thinning. Seedling radiata pine up to about three years of age, both regeneration and planted stock, can be seriously attacked by the greenhouse thrips, and in the warmer areas of the North Island considerable mortality occasionally occurs. Young trees which survive attack may be set back in growth, and face increased competition from surrounding weeds in the following year.

Description, life history, and habits
The adult insect is minute, about 1 mm long, black, flattened, with distinct head and prothorax, and an elongated abdomen (Fig. 4). It has two pairs of narrow clear wings fringed with long hairs. At rest the wings are folded flat over the abdomen and appear to the naked eye as silvery strips. Only by using a microscope is it possible to see that the legs, the last two abdominal segments, and most segments of the antennae are yellowish-white. The head and thorax are marked with a net-like pattern, and the legs have rounded ends which lack claws.

Reproduction is parthenogenetic; virgin females lay eggs which produce female off-spring. Males, which are extremely rare, are probably the result of aberrant genetic events. The female makes slits in leaves with her saw-like ovipositor and inserts kidney-shaped eggs which are about 0.3 mm long. Usually 10-25 eggs are laid, although as many as 50 are sometimes produced. They are laid singly over several days and take about 10 days to hatch. The young resemble the adult in shape but lack wings. When first emerged they are translucent white and have reddish eyes, but as they grow they become darker and then moult. The second stage grows to the size of an adult, and moults to reveal a pre-pupa which has white translucent wing cases. This stage lasts only for a few hours before developing into a pupa which moults after about 4-6 days, giving rise to the adult. The adults can move fairly rapidly if disturbed, the young are more sluggish and, although they possess legs, the pre-pupae and pupae rarely move. Young and adults feed; pre-pupae and pupae do not. The young often carry a clear droplet of excrement on the upward-curled tip of the abdomen, and it is possible that this acts as a deterrent to predators. When the drop becomes too large it falls and dries to a dark spot on the foliage.

Under optimum conditions of moderate temperature and high humidity, the time from egg to adult can be less than three weeks and populations may increase rapidly. High or low temperatures slow down the rate of development. It has been estimated that 419.8 degree-days above a temperature threshold of 10.1oC is needed for development from egg to adult (Chhagan & Stevens 2007). Shade is preferred, and on plants exposed to direct sunlight most attack occurs on the underside of the foliage. However, on severely attacked pine seedlings in full sun the tops can be as seriously affected as the lower portions. The adults are weak fliers and are mainly carried by the wind to new host plants.

Control
In older stands of pine and Douglas fir no control measures are necessary since, after normal pruning and thinning, conditions become unsuitable for developrnent of the insects. If severe damage occurs in young radiata pine, it is usually where heavy weed growth or remnant native vegetation is already affected, so attack can be minimised by removing such sources of infestation. Young densely planted eucalypt plantations may be heavily attacked and suffer significant defoliation.

There is a range of natural enemies attacking greenhouse thrips in New Zealand including two species of anthocorid bugs (Hemiptera: Anthocoridae) and some generalist predators. In addition, there is an egg parasitoid that can occasionally build to high numbers and a new larval parasitoid (Thripobius semiluteus) was purposely introduced into New Zealand in 2001 to control greenhouse thrips. Non-systemic contact insecticides such as the synthetic pyrethroids can be used against thrips.

In small areas, knapsack sprayers or mistblowers may be used. For larger areas aerial low-volume spraying may be the most economical method. Spraying may have to be repeated after about two weeks to kill young which may have hatched from eggs after the first spraying.