Forest and Timber Insects in New Zealand No. 9: Tomato fruitworm. 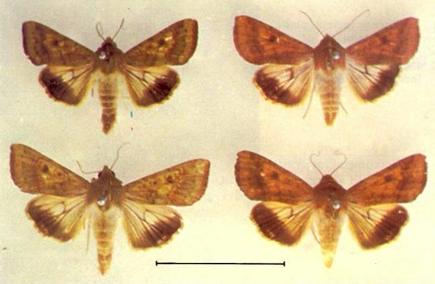 Type of injury
The caterpillar of Heliothis armigera feeds on virtually all parts of its host plants that are above ground, but concentrates principally on the flowers and fruits of herbaceous annual plants. On pine trees it chews on the soft parts of young needles, just at the tip of the fascicle sheaths. The end parts of the needles dry out and turn red. They either fold back at the damaged area and remain on the tree, or drop off to give a pile of red foliage on the soil (Fig. 2). In areas where extensive defoliation occurs, terminal buds may be eaten out and, rarely, bark is also chewed.

Hosts
Heliothis armigera is omnivorous. Although feeding predominantly on herbaceous and low shrubby plants, it has been found on citrus and other fruit trees, and also Pinus radiata (radiata pine). Plants of the families Solanaceae and Leguminosae (Fabaceae) are favoured hosts.

Distribution
It is widely distributed in southern Europe, North and South America, Africa, Asia, Australia, and the islands of the South Pacific. It is found throughout New Zealand. Its southerly distribution in this country is probably maintained by summer migrant adults, as even diapausing pupae (a resting stage in which the species overwinters) may be killed by heavy frosts.

Economic importance
Caterpillars damage a wide range of crops, including maize, tomatoes, tobacco, oats, carrot and onion flowers, flax, citrus blossoms and young fruit, and lucerne. They have been found 12 m up radiata pine trees, but the greatest effect on exotic conifers is in nurseries and newly planted areas, where seedlings may be extensively defoliated. This attack on seedlings usually occurs after populations have built up on a preferred alternative host (for example, Lotus pedunculatus), eaten out this food supply, and then transferred to the pines to complete their development. In newly planted areas attack is invariably most severe in the second generation of caterpillars in February and March (in the central North Island). A seedling planted out one year can withstand defoliation levels up to almost 75% providing the terminal bud is not damaged, or up to 50% if the bud is eaten, before height growth is impaired and the tree is suppressed by competing vegetation. The ability to withstand this degree of defoliation is probably due to the tree's continued growth and recovery in late March and April, after the caterpillars have pupated.

The most serious outbreaks of Heliothis armigera on pines have occurred after burning and giant-discing prior to establishment of the trees, and where Lotus pedunculatus has been a common weed invader.

Populations also occasionally build up and severely defoliate Lupinus arborea (yellow lupin) which is used as part of the process of stabilising and increasing the fertility of sand dunes before planting with pine trees. The significance of this type of defoliation has not yet been assessed. Mortality of lupin bushes would slow down the stabilisation process but, on the other hand, may increase the rate of cycling of nitrogen in the nutrient-deficient sandy soils.

Description, life history, and habits
The adult is a moth (Fig. 1) very variable in intensity and shade of colour. The forewings are pale yellowish-brown. There are several darker reddish-brown lines across the wing, with a dark spot slightly in front of the mid-point. The hind wing is paler, with a broad blackish band extending over the outer half, and the wing has a pale terminal fringe. Wingspan is 28-37 mm. The moth is usually nocturnal and is attracted to light, but may often be found feeding at flowers during the day. The females lay their eggs singly, more or less indiscriminately on the host plant. Some concentration may be found on flower heads. Females are capable of laying up to 4000 eggs, but normally lay in the region of 2000. Because it can fly great distances this insect rapidly colonises fresh areas.

The eggs are slightly oval and about 0.5 mm in diameter. They are pale green when first laid, changing to pale yellow after about 12 hours. They turn black just before hatching. The caterpillar (Fig. 3) is of typical noctuid form: it is fairly stout with four pairs of abdominal prolegs. The colouring is very variable, ranging from almost black, through red, to pale green. Caterpillars are frequently striped with dark and light longitudinal lines. Along the middle of the back there is often a white stripe, flanked by two broken white lines. A lateral white line, in which the prominent black spiracles (breathing pores) may be seen, is also usually present. The head is yellowish-brown, often with some darker patterning. There may be five, six, or seven larval stages. Fully grown caterpillars are about 40 mm long. 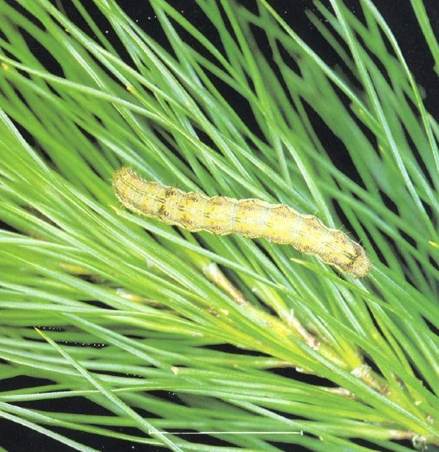 Where Heliothis armigera has occurred on lupin bushes, the caterpillar has often been confused with the superficially-similar caterpillar of the kowhai moth, Mecyna maorialis. The caterpillar of Mecyna maorialis may be distinguished by its bright orange head, black plates on the abdomen bearing small white projections, and the presence of setae (bristles) on the back and sides which are about the same length as the diameter of the body.

Heliothis armigera pupates in a small chamber about 50 to 100 mm below the surface of the soil. In the central North Island, adults first appear in November and December, with a second brood in February and March. (More overlapping generations may be expected in the more northerly regions of New Zealand.) Approximately 60% of the first-generation pupae enter a diapause (resting stage) and then overwinter. Over 99% of pupae of the second generation overwinter. Adults which emerge from the second generation before winter produce a partial third generation of caterpillars which succumb to cold weather in April.

Control
The high value of and investment in horticultural and agricultural crops dictates the prompt use of insecticidal sprays when Heliothis armigera is found on them. Artificial control measures have not yet been contemplated in forestry situations because of their high cost relative to the possible benefits expected, and the ability of pine seedlings to recover even after quite severe defoliation. Extreme populations of caterpillars have succumbed to a natural nucleo-polyhedral virus infection. After initial appearance of the virus in a dense population, spread of the infection is very rapid (Fig. 4). Approximately 50% of overwintering pupae in outbreak areas in the central North Island are infected with a parasitic fungus, Isaria farinose (Holmsk.) Fr. (formerly known as Paecilomyces farinosus). Parasitisation by insects does not usually reach a high level - in one instance 1% of pupae were attacked by Ichneumon promissorius Erichson (Hymenoptera: Ichneumonidae) (previously known as Pterocormus promissorius). 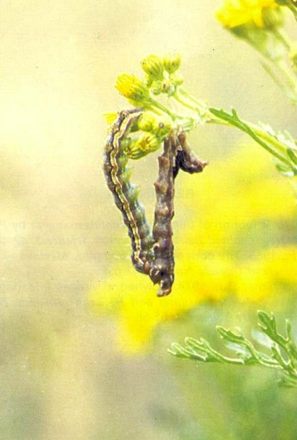 Fig. 4 – The remains of a virus-killed Heliothis armigera caterpillar being eaten by another of the same species. The healthy caterpillar will soon sicken and die. This is how disease can spread rapidly when many caterpillars are present.