Forest and Timber Insects in New Zealand No. 50: Forest semilooper.

Fig.1 - Adults of the forest semilooper are highly variable in wing colour and patterning.  Actual size.

Type of injury
The caterpillar of Declana floccosa eats the foliage of host plants.

Economic importance
Declana floccosa is common in all New Zealand forests and ranks after two species of Pseudocoremia (Selidosema) as the most frequently encountered looper-type caterpillar on radiata pine and Douglas fir. However, populations are never as high as those of P. suavis (Leaflet No.11) and the insect is of little economic importance. Only one outbreak - on Larix decidua (European larch) at Naseby Forest, Central Otago, in 1958 - has been recorded, but the extent of the damage was not quantified.

Description, life history, and habits
The moth, which has a wingspan of 27-35 mm, is extremely variable in colour and patterning (Fig.1). The forewings are rather narrow for a moth of the family Geometridae and have a ground colour of white or grey. A series of dark-grey, occasionally brown to orange lines or dots cross the wing, and there is usually a more or less distinct jagged line near the base of the wing and another about one-third of the distance in from the tip. Other lines may also be present. The hindwing is white to pale grey, often with two indistinct lines of shading near the middle and a broad dark band at the outer edge. Thorax and abdomen are stout and generally the same colour as the wings. The tip of the abdomen usually has a tuft of white hairs, and the underside of the thorax is densely covered with long white hairs. The antennae of the male are comb-like while those of the female are thread-like.

The moth is nocturnal and is attracted to light. During the day it is usually observed at rest on fences and tree trunks where its mottled grey colouring causes it to closely resemble a patch of lichen (Fig.2). 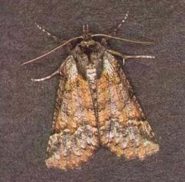 Eggs are laid upright on the foliage of the host plant either singly or slightly attached to each other, and in rows with up to 50 eggs in each row. The eggs, which are oval in shape and slightly narrower at one end, are a bluish green at first but turn to dark brown in a few days and then become reddish brown. They hatch in 10-14 days.

The caterpillar is a semilooper, having three pairs of thoracic legs and three pairs of abdominal "prolegs"; only when it is very young does it arch its body when moving as much as a true looper, which has two pairs of prolegs. There are five instars or larval stages, and colour pattern is as variable as in the moth. The first instar is small, up to 6 mm long, and it is very difficult to see the first pair of prolegs. The caterpillar at this stage is grey to brownish pink with various marbling effects, but is pale red between the body segments and so appears banded (Fig.3). The second instar is similar in colour but the red bands are not so distinct. The third instar has a pair of warts on the upper side of the eighth abdominal segment, and minute soft projections along the sides in line with the base of the legs. The underside of the fourth and fifth instars is flattened, the warts are still present, and the minute soft projections on the sides of the body are now considerably branched. These elaborately-frilled projections disrupt the outline of the caterpillar and help to camouflage it on lichen-encrusted twigs and on foliage. Caterpillars can vary greatly in the amount of body ornamentation, from those with a more or less smooth body, to those of extremely rough form with small bristly warts on most segments. They can be one colour throughout, or elaborately marbled in yellow-green, pale green, pinkish brown, brown and pale green, or black and light grey. 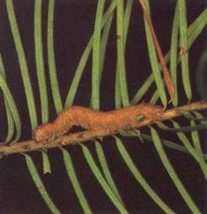 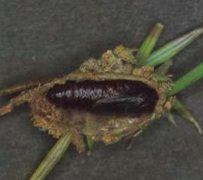 The fully grown caterpillar is 20-30 mm long (Fig. 4) and can reach this stage within four weeks of hatching. It feeds mostly at night and usually rests hidden during the day on twigs or foliage. When fully grown the caterpillar descends to the ground on a silken thread and pupates either on or just inside the litter layer in a loose cocoon usually incorporating dead leaf or needle fragments (Fig.5). Pupation lasts for at least four weeks.

The life cycle of D. floccosa is not well known. Although all life forms may be found throughout the year, evidence from light-trapping of moths and records of caterpillar abundance suggest that there is only one main generation per year.

Control
No control measures have been necessary. Populations are presumably kept in balance by natural agents such as certain parasitic braconid (Aleiodes declanae, Meteorus pulchricornis (Berndt et al. 2006)) and ichneumonid wasps, or by inclement weather. The tachinid fly Pales feredayi (Hutton) is also known to parasitise the caterpillars. If insecticidal treatment were ever required any spray recommended for leaf-eating insects should be suitable.