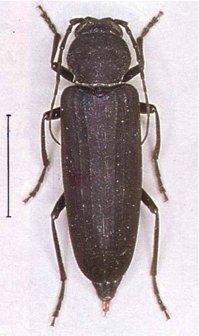 Type of injury
Arhopalus tristis attacks logs, stumps, and standing, dead or dying pine (Pinus) trees, primarily the main stem as well as branches above 60 mm diameter. Particularly heavy infestations occur in trees damaged by fire. Early larval stages feed in the inner phloem, leaving irregular trails of compacted red-brown bore dust. In heavily attacked, fire-damaged trees, the phloem zone can be completely destroyed from below ground level to above 6 metres (Fig. 2). Later larval stages usually make tunnels in the outer sapwood, mostly parallel with the grain. The depth of penetration varies with the population density as well as with the age and condition of the host material. Tunnels have been recorded to a depth of 100 mm in the wood four months after initial attack. Beetles also contribute to the devaluation of logs by vectoring sapstain-causing fungi such as Ophiostoma spp.

Fig. 2 - Bark has been stripped off this fire-killed radiata pine to show workings of A. tristis larvae.

Distribution
Arhopalus tristis is native to Europe, northern Asia (except Japan), and northern Africa. It was accidentally introduced into New Zealand, probably in the mid-1950s, and discovered in Northland in 1963. It has since spread throughout the North and South Islands as far south as Dunedin. 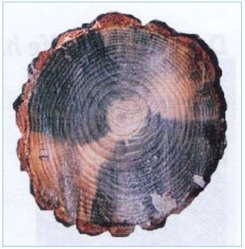 Fig. 3 - Sapstain from fungi vectored by A. tristis.

Economic importance
Arhopalus tristis does not usually cause much damage in the forest because infestations are normally limited to dead trees and woody debris. However, because of its rapid attack after a fire, this beetle can turn into a major pest because it greatly reduces the time available for salvage of burnt trees where it is present. Extensive tunnelling by larvae into the sapwood, resulting from concentrated egg-laying by adults, causes rapid deterioration of logs. Furthermore, sapstain fungi, which are vectored by the beetles, reduce the value of any salvaged wood (Fig. 3). During the period when beetles are active, the window of opportunity for recovery of logs without sapstain may be as short as six weeks after a fire.

A quarantine issue of great economic importance is the sheltering of adults among sawn timber at sawmills and in ports. Although they cause no damage, this is a major problem because export timber must be free of live insects, and so far A. tristis does not occur in North America, Japan, and anywhere in the Southern Hemisphere other than New Zealand. Log exports to the USA in particular were in jeopardy recently because of such biosecurity issues. The presence of A. tristis necessitates the fumigation of large quantities of sawn timber exported from localities such as Tauranga and Nelson. Depending on the regulations of the country of destination, fumigation of export logs can be compulsory, regardless of infestation.

Description, life history, and habits
Adult females (Fig. 1) are 12-30 mm long. On average, males tend to be smaller than females. Females are dark brown to black, but males are often lighter brown. The body is elongate and broadly oval in cross section, as in many other longhorn beetles. The head extends obliquely forward, and almost the whole of the mouthparts can be seen from above. The thread-like antennae are half to three-quarters the length of the body, with those of the males being longer. The prothorax is smoothly curved, carries no spines or protuberances, and is not as wide as the elytra (wing cases). The elytra bear four longitudinal ridges and have nearly parallel, slightly tapering sides. Eggs are opaque, white and cigar shaped, and measure approximately 0.5 by 1.8 mm (Fig.4). The larvae (Fig.5) are almost cylindrical, more flattened than in most other beetles, creamy white in colour with rather conspicuous legs. Larvae are very active when they are removed from their tunnels. The jaws are pointed, and there is a pair of blackish projections near the end of the last abdominal segment (Fig. 6). 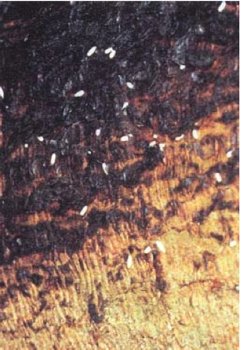 Adults, which live for several weeks, may emerge at anytime between November and March. When they are held, the beetles make a characteristic squeaking noise. Each female can lay up to about 1000 eggs. A marked oviposition preference for fire-scorched host material is shown (Fig.4). Eggs are laid in groups of 5 to 50 in the bark crevices of logs and fire-damaged or killed trees as early as 24 hours after a fire. Host material not affected by fire generally supports lighter populations but may remain suitable for attack over a much longer period. Strong bark adhesion to the sapwood and high moisture content in the inner phloem are essential for successful attack.

Larvae hatch in about 10 days and bore towards the inner phloem and cambium. Under crowded conditions later larval stages may enter the sapwood but, in the absence of competition, the cambial region is preferred. The larval tunnels are oval in cross section and up to 12 mm wide (Fig. 7).Where larvae are numerous, the outer 50 mm of sapwood may be severely damaged six months after attack. 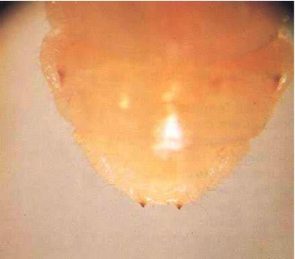 Fig. 6 - Close-up of rear of larva, showing the two blackish projections by which the species can be identified. 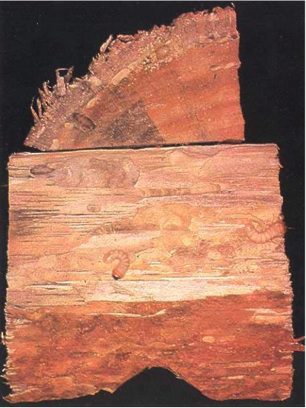 Fig. 7 - Tunnels of A. tristis larvae in radiata pine.

Fully grown larvae prepare longitudinal pupal chambers 10-20 mm within the sapwood (Fig.8), and from one end of these cut radial exit tunnels which extend to the surface of the bark. The oval exit holes are then firmly plugged with coarse strands of wood just before the larvae retreat to pupate. The beetles emerge in the ratio of about two females to three males about 50 days after the fully grown larvae cut the exit holes.

During flights which occur only at dusk and through the early part of the night, adults may travel more than 3 km to attractive hosts, such as fire-damaged trees. There is evidence that female beetles are attracted by pine volatiles from wood and bark, particularly from burnt trees or sawn timber. Whether this applies to males to the same degree is still unclear. Beetles are also attracted to light. The majority of individuals complete their life cycle in one year but in one study about a third took two years. 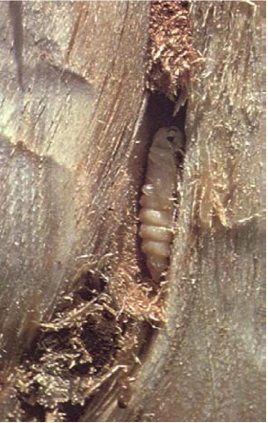 Control
The need for control of A.tristis is primarily related to its role as a quarantine pest. Infested export logs and sawn timber in which adults are sheltering are normally treated by fumigation with methyl bromide or phosphine. Areas surrounding yards where export timber is stockpiled before shipment should be kept free of A. tristis sources such as reject logs, log dockings, slabs, and dead or dying pines, especially those affected by fire. However, when ports or timber yards are located near forests, such attention to yard hygiene may not be sufficient.

UV light traps have been examined for control of A. tristis at the port of Nelson, where the high numbers of this beetle are often of particular concern. Such traps are highly attractive to A. tristis , and could be useful for monitoring, for example to determine the beginning and end of the flight period, or to estimate population levels. However, their usefulness as mass-trapping devices is limited when numbers are very high.

Use of low intensity yellow lights (e.g., low pressure sodium) for general site lighting at wood processing and transitional facilities could reduce the long range visual attractiveness of a site to A. tristis, and other, wood-boring and bark beetles (Pawson et al 2009).

Monitoring of A. tristis (and other wood-boring and bark beetles) can be conducted using Lindgren funnel traps with lures of alpha-pinene and ethanol (Brockerhoff et al 2006).

Repellents have also shown some potential for pest management. In exploratory studies, a mixture of two compounds reduced oviposition by as much as 99%.

The most important natural factors limiting populations of the insect appear to be host availability and overcrowding of larvae. Mortality occurs through both physical damage to one larva by another and competition for food. The roles of parasites, predators, and entomophagous fungi in New Zealand have not been examined in detail. Only one predator, the larva of the clickbeetle Thoramus wakefieldi Sharp, has been recorded in New Zealand.