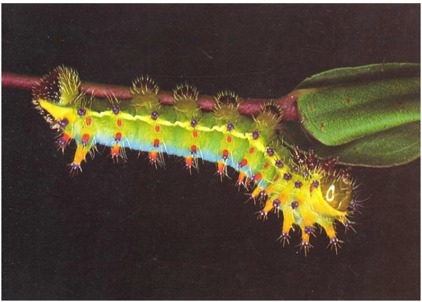 Fig. 1 - Caterpillar of the gum emperor-moth in natural position upside-down on twig of eucalypt.

Type of injury
The caterpillar of the gum emperor-moth feeds on the foliage of the host plants.

Hosts
The main hosts are eucalypts. The moth, however, appears to be selective when laying eggs and caterpillars have been recorded from only 24 of the 60 species of Eucalyptus that have been examined in New Zealand. Of the species that have been considered promising for plantations in New Zealand ( E. delegatensis, E. fastigata, E. obliqua, E.regnans, E. saligna, E. botryoides, E. muellerana, E. pilularis, E. nitens, and E. oreades ), only E. obliqua and E. muellerana have not yet been attacked. The gum emperor-moth has also been recorded in New Zealand on Schinus molle (pepper tree), on which it can complete its development from egg to adult, and on Liquidambar styraciflua (liquidambar), Prunus armeniaca (apricot), Betula pendula (silver birch), and some cultivars of Malus sylvestris (apple), on which it is possible that only older caterpillars can survive. It has been recorded in Australia feeding on Pinus radiata (radiata pine), although apparently only after passing the early stages on eucalypt undercoppice.

Distribution
The gum emperor-moth is a native of eastern Australia and was probably introduced into New Zealand as pupae on imported hardwood poles. The moth was first found in Wanganui in 1915 and has since spread slowly from that area. By 1960 it had become distributed in the wide coastal strip from New Plymouth through Palmerston North to Levin, with records also from Wellington, isolated areas on the east coast of the North Island up to Ruatoria, and the Waikato region centred on Cambridge. The insect has frequently been used for biology studies in schools and teacher training establishments, as well as in the home. Much of the spread of the moth has resulted from intentional or accidental releases from these situations. The gum emperor-moth was first recorded as being established in the South Island in Nelson in 1968. It is now found throughout most of the North Island, wherever eucalypts are grown, as well as in Nelson in the South Island.

Economic importance
Caterpillars defoliate their host plants (Fig. 3) and will affect the growth rate and crown-form of the trees (repeated defoliation causes a proliferation of branching and consequent bushy appearance). Severe defoliation may kill trees. Damage so far has usually been seen in ornamental, shade, and shelter belt trees. It is not possible to predict how serious the effects of the insect might be if eucalypts were planted more widely.

Fig.3 -  Eucalyptus pilularis defoliated by caterpillars of the gum emperor-moth.

Description, life history, and habits
The eggs, caterpillar, cocoon, and moth are readily identified and unlikely to be confused with any other species found in New Zealand.

The wing colour of the adult is pale brown, often with a rosy tinge. The wing is clothed with soft setae (bristles), giving it a furry appearance. The wing-span of the male is 85-110 mm, that of the female 95-130 mm. The most prominent features on both pairs of wings are the eye spots (Fig.4). On the forewings these are about 7 mm in diameter, ringed in reddish-brown with pink centres. In the hind wings the spots are larger (10 mm), ringed in black with orange centres. In the middle of both pairs of eye spots there is usually a white dot. A pair of black or reddish-brown stripes may be seen on both pairs of wings, one on either side of the eye spots. The undersides of the wings are essentially similar to the upper surfaces. The antennae are pectinate (comb-like), the pectinationsof the male being about three times as long as those of the female. 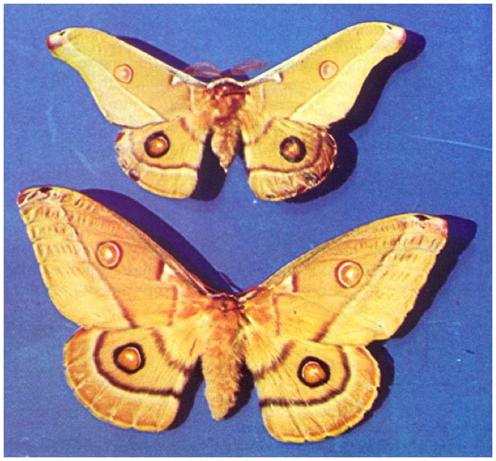 Fig.4 - Above – Gum emperor-moth; male above, female below.
This photo shows approximate maximum wingspan of female.

The eggs are oval and are laid in rows on their sides, often along leaf margins. They are approximately 2 mm long and vary from light brown to pale yellow in colour (Fig. 5). 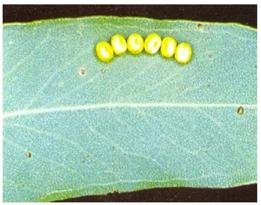 Fig.5 - Eggs of the gum emperor-moth on eucalypt leaf. 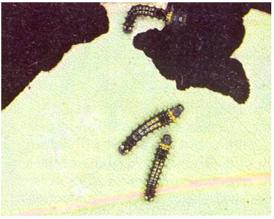 The first- and second-stage caterpillars are basically black, with two yellow stripes along the top and one along each side of the abdomen (Fig. 6). The prothorax is orange-brown and the head black. Small tufted projections occur along the stripes on each segment and give the caterpillar a hairy appearance.

In their final three stages of growth the caterpillars are bright green, the colour resembling the foliage of most eucalypts. The upper surface is slightly lighter and more blue-green than the underside. As the caterpillars then normally feed hanging upside-down on twigs, this difference in colour intensity aids their camouflage (they are much more conspicuous if twigs on which they are feeding are held the other way up). A pale yellow stripe extends down the side of the body, bearing a tufted blue projection on each segment. Similar projections are found all around the thoracic and abdominal segments and may be red, blue, or blue and red. The fully grown caterpillar may be up to 120 mm long (Fig. 1).

Pupation takes place in a tough silken cocoon amongst the leaves, or more usually on twigs and small branches. Setae from the caterpillar, and twigs or leaves may adhere to the brown fibrous silk of the cocoon (Fig. 7). 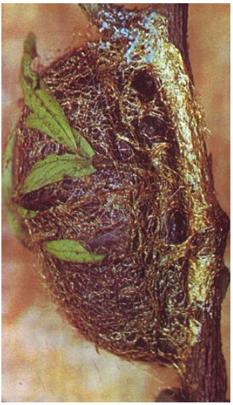 In spring and early summer the adult within the cocoon regurgitates a fluid which softens the silk; it then emerges by cutting a hole with a sharp book on the base of each forewing. The moth has poorly developed mouth-parts and is unable to feed. Mating occurs soon after emergence and the eggs are then laid.  Caterpillars are usually found from mid-December and pupate from approximately mid- January to the end of August. Some adults may emerge in late February to mid-March and produce a second generation of caterpillars, but the pupae produced in mid-January to August normally overwinter. Some variation in the life cycle may be expected under climatic conditions other than those of the Manawatu area where the life history was elucidated. White (1972) considers that were it to spread to North Auckland it might have two distinct generations in that region.

Control
Widespread outbreaks of the gum emperor-moth have not been recorded, and it is thought that populations are probably regulated by natural biological control agents. Caterpillars are often found infected with a polyhedral virus (Fig. 8) and, under conditions suitable for mycelial growth, may succumb to a parasitic fungus ( Beauveria sp.) (Fig.9). Also, magpies break open the cocoons and eat the contents. Control should readily be obtained with an insecticide designed for leaf-eating insects if it is applied in December when the caterpillars are actively feeding. It is probable that such control would be reasonably long-lasting as the moths disperse slowly.

Fig.8 - Caterpillar of the gum emperor-moth infected with a virus (compare with healthy specimen in Fig. 1). 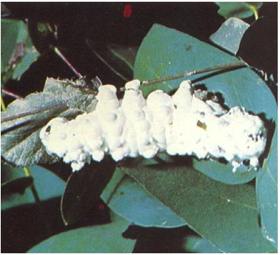 Fig. 9 - Caterpillar of the gum emperor-moth killed by a fungus.