Forest and Timber Insects in New Zealand No. 44: Large cicadas. 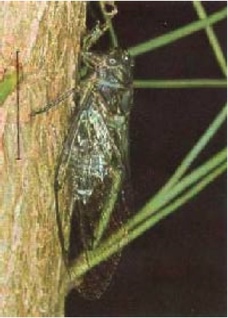 Type of injury
Young cicadas (nymphs) and adults both have piercing-sucking mouth-parts with which they take up plant sap. Nymphs live in the soil and feed on roots while adults feed on above-ground parts of plants, but this seems to have little effect on plant growth. The major damage is caused by the female piercing plant tissues with her ovipositor to lay eggs. The cuts made by the three species of Amphipsalta form a herringbone pattern (Fig. 2), and twigs and branches so affected may be sufficiently weakened to break in high winds. Such broken branches on conifers show up as reddish "flags" in the canopy when the foliage dies. Open cuts also provide entry for pathogens and wood-boring insects. Often the cuts heal over (Fig. 3) making the twigs gnarled in appearance. 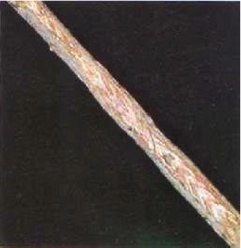 Fig. 2 - "Herringbone" scars made by a female Amphipsalta when egglaying. The branch is of Eucalyptus ovata. 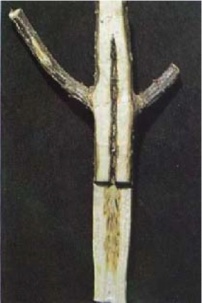 Distribution
All cicadas in New Zealand are natives. Amphipsalta zelandica occurs throughout the country apart from central Otago and parts of Canterbury. Amphipsalta cingulata is present over the whole of the North Island only, and A strepitans is found on the eastern side of the South Island from Marlborough to central Otago, but is probably absent from coastal areas south of Christchurch. Amphipsalta strepitans also occurs in the southern tip of the North Island around Wellington city.

Economic importance
Economic damage is usually restricted to fruit orchards where twigs weakened by oviposition scars may break under the load of ripening fruit. Occasionally cicadas are very numerous in forest nurseries and exotic plantations but damage is economically unimportant. Amphipsalta zelandica is probably the species responsible for most of the noticeable damage.

Description, life history, and habits
In New Zealand there are about 30 species of cicada and all are similar in shape. The adults are stout with two pairs of large, distinctly veined, transparent wings folded tent-like over the abdomen when at rest (Fig. 1). The front edge of the forewing is strongly veined. The head is broad with prominent compound eyes and short bristle-like antennae. Three simple eyes are arranged in a triangle on top of the head. Long piercing tube-like mouthparts extend beneath the thorax. The abdomen tapers to the rear, and the female has a short spear-like ovipositor underneath near the tip. The female is usually longer than the male. Amphipsalta are mottled green and black (Fig. 4), and can be recognised from other cicadas by their large size (body length greater than 19 mm). Amphipsalta cingulata is darker than A. zelandica and generally has a shorter wingspan; A. strepitans is distinctively smaller in both body and wingspan (Fig. 5). 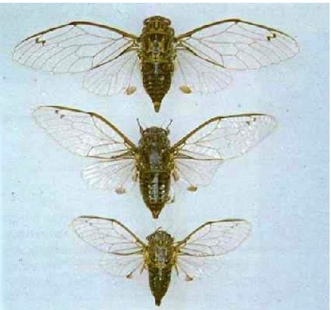 Fig. 5 - Males of the three Amphipsalta species. Actual size.
Top: A. zelandica (the largest).
Centre: A. cingulata (darker body and shorter wings than A. zelandica).
Bottom: A. strepitans (wingspan less than 60 mm).

Newly hatched nymphs are creamy at first and later darken to brown. Their mouthparts are similar to those of the adult, and their forelegs are enlarged for digging. They drop or climb to the ground to burrow as much as 400 mm into the soil, where they live in smoothly lined tunnels and feed by sucking sap from roots. The nymphal stage of Amphipsalta is thought to last between one and five years, during which time the nymph can grow up to 25 mm long (Fig. 6). No long-lived synchronous broods such as exist for the "17-year" cicada of North America have been recorded in New Zealand, although more Amphipsalta do emerge in some years than in others.

When egglaying the female Amphipsalta straddles a plant shoot and uses her ovipositor to make a diagonal cut across the wood grain. White cigar-shaped eggs are packed tightly into the shredded wood as the ovipositor is withdrawn from the cut. The process is repeated at a different angle to produce a pair of egg chambers in the shape of a V and the female then moves forward to make the next pair. A series of egg chambers thus form a herringbone pattern. One female may lay a total of 200-300 eggs over several oviposition sites. The eggs can take several months to hatch and many may overwinter. Sometimes the oviposition wound will callus over and the eggs may not survive.

The mature nymph burrows to the surface (Fig. 7), and climbs some vertical object such as the stem of a shrub or tree before moulting. The adult emerges, usually after sunset, through a split along the back leaving the brown cast skin of the nymph still attached to its support (Fig. 8). Amphipsalta zelandica start emerging in December and reach maximum numbers during late February and early March. Amphipsalta cingulata and A. strepitans can start emerging in mid-October. The end of the season depends on the weather, for individual A. zelandica have been heard as late as May or June, A. cingulata in April, and A. strepitans, the end of February. Adults probably live no longer than one month. 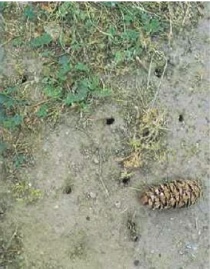 Fig. 7 - Holes made by Amphipsalta nymphs when emerging from the ground (the Douglas fir cone is 100 mm long). 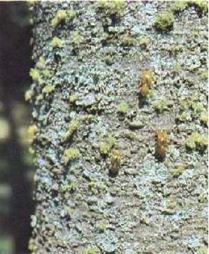 Fig. 8 - Cast nymphal skins from which adults have emerged. Found about 1.5 m above ground on trunk of tree.

The adult male cicada is renowned for its sharp staccato song which is made to attract females. The cavities containing the sound-producing organs are situated on each side of the under surface of the first abdominal segment, and each cavity is shielded by a large disc-like flap (Fig. 9). The sound-producing mechanism is on the outerwall of the cavity and operates by causing a stiff convex membrane to distort, which produces a sound similar in manner to that made by pushing the bottom of a tin in and out. The sound can be altered by the elevation of the flaps. The female has smaller flaps than the male and does not sing. The organs of hearing are at the rear of the cavities in both sexes. 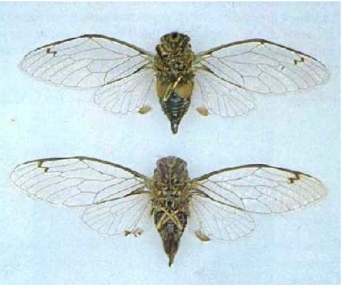 Fig. 9 - Amphipsalta zelandica underside . Note the large brown flaps an the abdomen of the male (above), and the much smaller ones of the female (below). The spear-like ovipositor is a feature of the underside of the female. In both specimens the tube-like mouthparts can be seen passing backwards from the head and resting between the bases of the legs. Actual size.

Singing appears to be regulated by warm temperatures, and males often sit in direct sunlight. Amphipsalta zelandica tend to emerge in large numbers and sing in chorus, almost deafening at times. They may also sing after nightfall. The song of A. cingulata is more leisurely and, since the males do not gather in large numbers or sing in chorus, their sound is often drowned by that of A. zelandica. Amphipsalta strepitans has a chirping song. All Amphipsalta males accompany their song with a regularly timed sharp clicking sound. Females make similar clicks and these draw the attention of males. The clicks are produced by rapid vibration of the wings but the actual mechanism is uncertain. Often the thickened leading edge of the wing strikes the surface on which the insect is resting, but clicks are also made when the wings do not hit the surface.

Control
Cicadas are host to a number of natural controlling agents. Their eggs are often parasitised by a minute wasp Idiocentrus minus Gahan (Hymenoptera: Mymaridae). Larvae of ground beetles (Carabidae) have been found feeding on large nymphs, while birds, especially the house sparrow, destroy large numbers of adults. The fungus Isaria sinclairii may invade nymphs and convert their body contents to a solid mass of white hyphae.

Chemical control of cicadas has never been attempted in New Zealand.