Forest and Timber Insects in New Zealand No. 26: Two-toothed longhorn 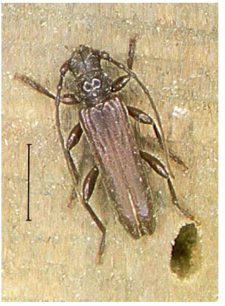 Type of injury
The larvae of the two-toothed longhorn beetle bore in dead softwoods. They may be found in both the sapwood and the heartwood of timbers in use, logs, branches, and dead trees. Successful infestation also occurs in living trees where access to the heartwood can be gained through logging wounds and dead branch stubs. The early larval tunnels run predominantly with the grain but later tunnels run in all directions. Severe infestations may reduce timber to a thin outer shell. The larval tunnels are oval in cross section and are tightly packed with a mixture of wood scrapings and pellets of excrement (Fig. 2). When this is removed one finds typical crescent-shaped marks across the tunnel walls (Fig. 3). The emerging beetles make oval exit-holes ranging from 3 to 7mm in long diameter; these may be the first indication of an infestation. 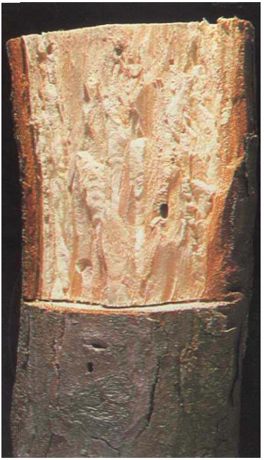 Fig. 2 - Tunnels of the larvae of the two-toothed longhorn in a macrocarpa log. 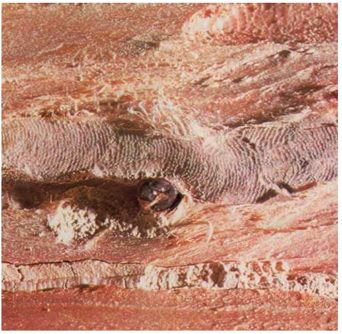 Fig. 3 - Close-up of tunnels of the larvae in a macrocarpa log. Note the crescent-shaped marks.

Distribution
This native insect occurs throughout New Zealand wherever suitable hosts are found. It has been reported in New Zealand timbers in Australia.

Damage may also occur in furniture, finishing timbers, mouldings, flooring, and joinery made from timber infested in the forest or mill yard, or when used for these purposes in damp places. Although serious structural damage is unlikely in such situations, exit holes mar surface finishes and emerging beetles may re-infest suitable timbers.

Description, life history, and habits
The adult female is red-brown to black and up to 25 mm long, although the size is variable possibly depending on nutrition, temperature, and wood moisture. The head projects forward and, at rest, the thread-like antennae extend about halfway down the body. The prothorax, which is narrowest where it joins the elytra (wing cases), has two shiny raised areas on the top and a prominence on each side. These prominences give the beetle its common name, "two-toothed". The elytra are parallel-sided and densely covered in short, pale yellow hairs which become worn away in older specimens. The male is similar in appearance to the female but possesses longer antennae extending about three-quarters down the body (Fig. 1). 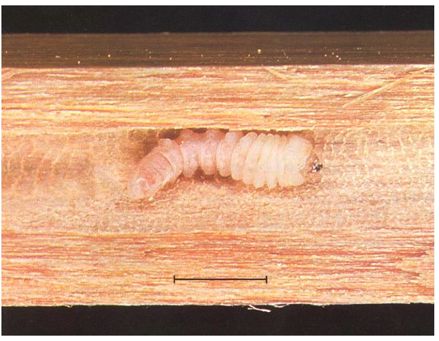 Fig. 4 - larva of the two-toothed longhorn in rimu timber.

The cream-coloured larva (Fig. 4) has its head and rounded gouge-like jaws projecting forward. The body is swollen at each segment into transverse fleshy lobes and rudimentary legs are present.

The eggs are laid singly or in small groups in cracks, in crevices, or under surface projections of roughly sawn timber. Preference for such sites is believed to be the major influence in determining the insect's normal host range. A number of timber species, including Pinus radiata (radiata pine), are probably equally suitable for larval development but are not infested unless in close contact with normal host timbers. Eggs may be laid in crevices between the two timbers, and on hatching the larvae invade either species indiscriminately. If larvae are established in one of the usual hosts, they may bore into an adjacent timber not normally affected.

In the forest, eggs may be laid on dead branch stubs or wounded parts of living trees. The larvae bore through dead wood to the heartwood where they may complete their development. This is especially common in unpruned macrocarpa and Lawson cypress which often provide a source of infestation for nearby buildings constructed from susceptible timbers. Logs may be attacked soon after felling. Sawlogs from forests logged previously are particularly prone to infestation, probably because trees felled on the second logging have incurred branch-breakage and wounding during the first.

Sawn timber may be infested while seasoning or after it has been used in buildings. Where egg- laying occurs on timber in use it is generally confined to material in damp, poorly ventilated locations, hence the predominance of infestations beneath floors.

Between 2 and 4 weeks after eggs are laid the larvae hatch and bore into the wood. Little is known of the insect's larval development which may extend from 2 to 11 years depending on such factors as moisture, temperature, and nutritional value of the host. Slowest development may be expected in dry heartwood at low temperatures, and fastest probably occurs in kahikatea branch wood in forests.

Just before it pupates, the larva prepares an elongate chamber parallel with the grain and about 10-20mm below the surface. From one end an emergence tunnel curves sharply to approach the wood surface. The pupal stage lasts about 3 weeks but the adult may remain in the pupal chamber for an undetermined time before it emerges.

Adults emerge in autumn or early winter and tend to avoid light. The adult life-span is not known.

Control
The most successful treatment of infestations involves the removal of affected timbers and their replacement with those treated with preservatives. This is especially desirable if principal structural timbers are affected and where there is risk of reinfestation from surroundings. Fumigation with methyl bromide will destroy all timber insects but provides no protection against reinfestation from adjacent sources. Brush and spray treatments with insecticides may be effective if insect tunnels allow adequate penetration of the solution into the affected timbers. For timber sealed with paint or varnish the solution may be injected through emergence holes or through holes specially drilled. Improvement in sub-floor ventilation may sometimes reduce the risk of reinfestation.

Damage at sawmills and timber yards may be reduced if obvious sources of infestation such as old waste logs or derelict buildings are removed. Infested sawn timber may be kiln sterilised using a temperature of 75oC and 100% relative humidity for 2 hours per 25 mm timber thickness. However, this is appropriate only if early stages of infestation are recognised and the timbers are still essentially sound.

The only recorded parasite is a braconid wasp, Doryctes ambeodonti Muesbeck, which kills an unknown number of the larvae.