The last part of the final field day of the 2018 conference was to Claire and Terry Gavin’s 53-hectare property Otira. Many of you will have read the article about this property in the May Tree Grower as winner of the 2018 Husqvarna South Island Farm Foresters of the Year. This was an opportunity for us to see it for ourselves.

Claire and Terry confirmed that they had bought the property in 1994 having seen a ‘for sale’ sign as they passed it on the road. They also confirmed that the soil is so stony that they needed a crowbar to dig the holes to plant trees. The first stop for us was among some cypress which were growing very well but the first impression was the amazing effort Terry and Claire had put into the labels for the trees. One of the photographs below shows such a sign and I doubt there is any other NZFFA member with such impressive signs to show what trees they have planted and when.

We were told that this area was good for Lawson cypress although we were standing among lusitanica and the less well-known cypress clone, kukupa, all planted in 1995.

He said that in the 1980s Dudley Franklin thought that the success of the improvements with radiata pine clones, compared with trees grown from seeds, could also work for cypress. He therefore started working with macrocarpa cuttings and one of the first to be tried was kukupa which rooted quite well. However, it subsequently proved to be unsuccessful and incredibly prone to canker. On the site where we were standing the trees were growing very well.

These trees have not been thinned and at 23 years old they have a mean height of 23 metres showing an average growth of a metre a year. The prediction from Patrick was that in 12 years at age 35 there will be 460 cubic metres a hectare of wood if the current stocking of 830 stems a hectare is maintained. This was only one plot of kukupa but it shows the potential. The success of this kukupa plot could be due to the poor soil, but whatever the cause, Patrick said that his take-home message would be that on the right site you will always get a decent tree. 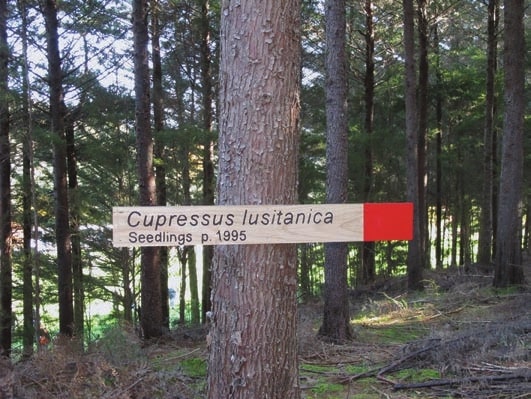 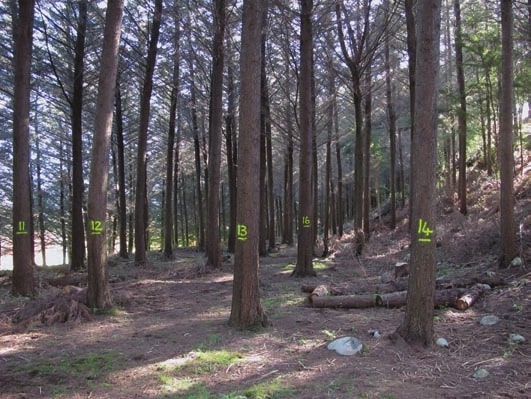 Then it was Dudley Franklin’s turn. He explained that in the late 1980s the expense of pruning was the worry so the aim then was to try and get trees with light branches. Canker was not a concern when choosing clones so they did not look for trees which were less susceptible to canker. Dudley selected the trees which were to become kukupa clones from one cutting which grew really well and was lightly branched. What we were standing under see was the result.

Alan Laurie then chipped in to say that the parent trees of the kukupa clones which he knows well look nothing like the ones we were looking at now so he doubted they were true kukupa clones. But he added that canker is linked to nutrition, with the trees sometimes needing more, sometimes less.

Paul Millen was the final contributor. He said he had been milling and production thinning cypress for a long time. He tried kukupa in the Marlborough Sounds with one plantation on a hill and one in a valley. The ones on the hill in the sun disappeared very quickly succumbing to canker but those in the valley on heavy soil have survived.

Where did this leave us? I think it was in the category that nobody really knows and there are a lot of questions still to be answered. It is perhaps one of the reasons so many people just plant radiata pine. It does what is expected without much fuss, but the wood is not as good and it is a lot less fun.

We moved on from the cypress discussion to the border of the property with the river. The land is very vulnerable to the river when it floods and it has moved so much that the property boundary is on the opposite bank. The river is fed by a lake which holds back a lot of water and the river stays in flood for days at a time. This means the banks are very prone to erosion and the flood water will remove any rocks if they weigh less than three tonnes. We were shown some of the rocks and groynes used to help protect the land from being washed away. 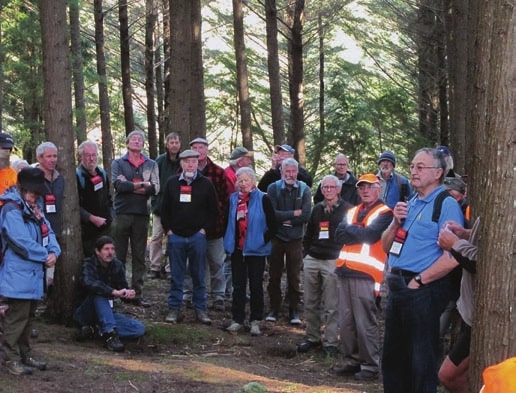 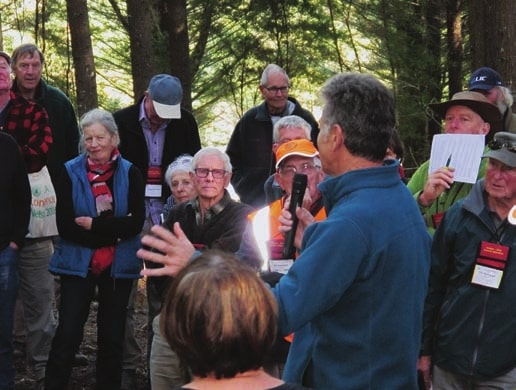 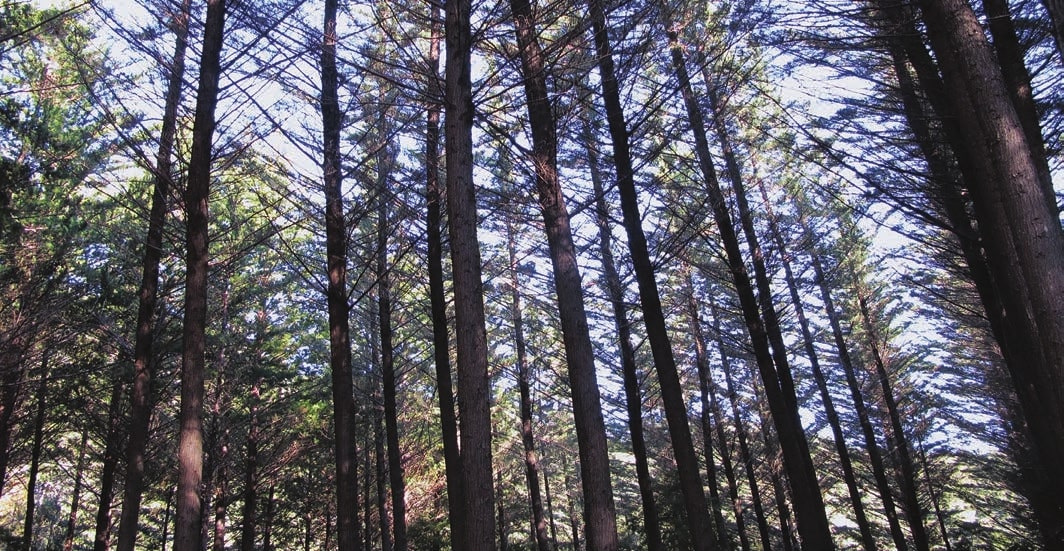 We then had a brief presentation from Scion about rivers and forestry. Generally, the local rivers have low nitrate levels but these levels are increasing, as they are across all New Zealand. Forestry usually causes low nitrate leaching, an annual rate of less than three kilogrammes of nitrate a hectare is fairly typical.

The only times to be concerned about leaching are at the beginning and end of the forestry rotation. Old farmland is good for forestry as there is often surplus nitrogen remaining in the soil and the trees will grow well. But as a result, nitrogen will leach at the planting stage, decrease as the canopy closes, then before harvest when the trees do not need any additional nitrogen, more will end up in the rivers. One long term solution to reduce leaching is to have fewer rotations in other words, grow the trees for longer periods of time.

We got back to cypress when we moved along to where Terry had planted some callum clones of cypress. He had started to prune them in a dry summer and was told that they were looking very sick because he had pruned them too much. He explained that as far as he was concerned these clones were ‘dogs’. All had canker but he hung on to them until Bevan Walker said he should only keep them if he wanted trinket wood, so then he cut them down.

He has recently been replacing them with the ovenvsii clone and those we could see which were just a few months old had already doubled in height.

Patrick Milne took the microphone at that point and said that ovensii grow well on a wide range of sites and other than radiata pine, probably tolerates the biggest range of sites. It is a cross between lusitanica and yellow cypress and as the latter grows in very poor soils the hybrid has retained some of this tolerance.

The ovensii timber has not had a lot of study but what we do know is that it is equivalent to a good macrocarpa but with a class two durability. This means that posts in the ground should last 10 years or more. Paul Millen added that the one sample tree he has milled has lemon yellow timber, which may disappoint macrocarpa fans who like the deeper colour. He said he had given up on macrocarpa and that on sites too cold for durable eucalypts suggests that we should grow durable ovensii cypress instead.

There was a discussion about being able to make money from cypress. Again, Paul joined the discussion saying that we need to remember to think differently when harvesting small lots of cypress. Radiata pine needs to be felled, removed and milled fairly promptly. If it is left on site in the rain it very quickly gets blue stain then fungal infection and be worth nothing.

However, cypress can be handled more like the way native timber was felled in the bush, milled and left to season. The timber needs covering to keep the rain off, but a few sheets of old corrugated iron will do this for very little cost. For harvesting he suggests using a large four-wheel drive tractor with a big winch if it is on flat ground. A small excavator with a felling head may also work. Then with a portable mill the timber can be milled on site at fairly low cost.

By this point we were running out of time and daylight and the field day drew to a close. As usual we had all had a good time and learned a lot. 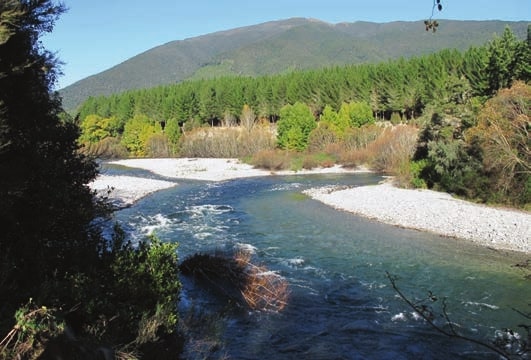 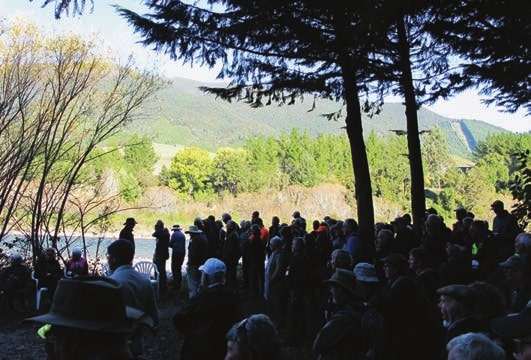 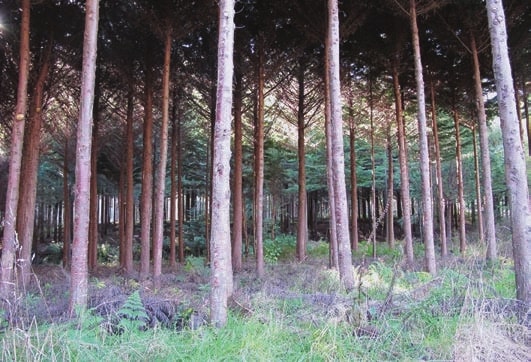 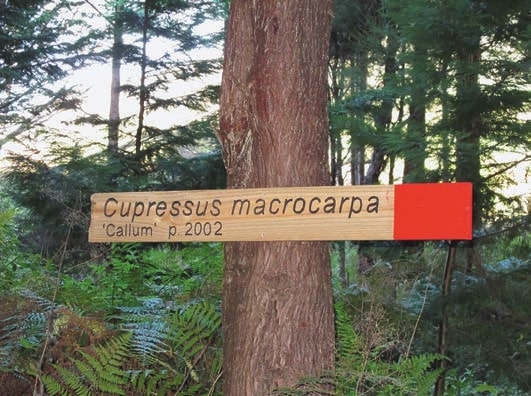 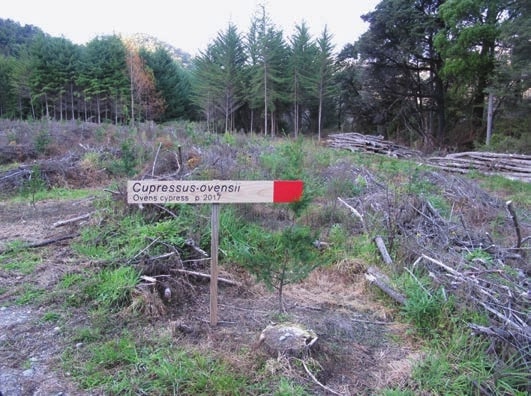 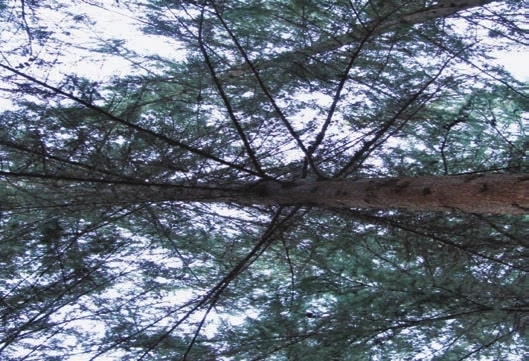 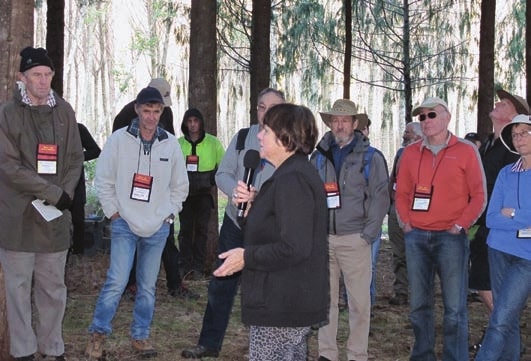