Flood damage, widespread landslides and wood debris flows emanating from plantation forestry have made national headlines twice this year. This commentary is possibly a little late, given that Cyclone Gita and Tolaga Bay debris damage occurred early this year, but in fact there has been a series of similar events in recent years. At the time of writing I understand that some sort of enquiry is still to happen in respect of the Tolaga Bay incident.

Geologically speaking, New Zealand is a relatively young country. New Zealand sits astride the boundary between two tectonic plates, much of our land is being thrust upwards with creases and folds in the crumple zones, creating steep slopes and fractured underlying rocks which are prone to landslides. This is more likely if soil moisture is trapped between soft top soils and less permeable deeper surfaces. Gravity and water help the hillsides slough off, carrying rafts of stumps and logs with it.

The recently released National Environmental Standard for Plantation Forestry categorises land by erosion susceptibility classification There are four colour-coded land classes. Low is coloured green and moderate is yellow with both having lower erosion risk. As a result, forestry is a permitted activity on this land subject to meeting many conditions.

The orange and red colours are for high and very high risk erosion areas. These have stricter requirements and some forestry activities cannot be carried out without a resource consent. For example, the maximum allowable clear fell harvest area for red zoned land is set at two hectares, and even planting forest which is intended to be harvested on red zoned land requires a consent.

There are very substantial areas of privately owned hill country in the North Island, as well as in the Nelson/ Marlborough region, which are currently under pasture or plantation forestry and which are orange or red zoned. Historical clearance of this land for pasture created large erosion problems. Much of the East Coast plantation forestry arose, after Cyclone Bola did its worst in 1988, as part of a government sponsored attempt to stabilise the hillsides.

After clear fell harvest, pine forests have a period of six or more years of vulnerability to land slip as old roots decay and before new planting form canopy coverage at about two to eight years after harvest. After clear fell harvest and in extremely heavy rain, widespread slipping or slope failure may happen. Stumps and other forestry debris left on the hillsides may also be swept down into the valleys. The logs and stumps in the flood waters compound downstream damage to infrastructure. By comparison with denuded clear fell areas, land with intact forest canopy − native and exotic − remains mainly intact. However, depending on the severity of the rain, the tree species and underground factors, some slips may still occur in intact forest. 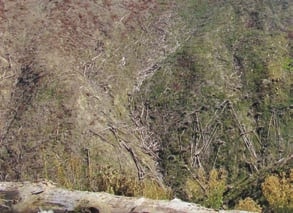 Forestry harvesting at Tolaga Bay and Riwaka appears to have been carried out according to local council requirements, which probably meant adhering to the New Zealand Environmental Code for Plantation Forestry. It seems that the district councils did not expect to factor in weather bombs, but the Tologa Bay weather in a general sense was predicted 30 years ago. The NZ Tree Crops Association was concerned enough about blanket planting pines after Cyclone Bola to write to government requesting a rethink of policies. Two of the recent Sustainable Land Management and Climate Change Research Programme projects relate to either transitioning highly erodible east coast land from plantation pine to other land uses or to permanent cover forests.

Many foresters feel that better harvesting practice could have considerably reduced the risk of wide scale mid-slope failure and debris overloads. Even if stands are even-aged, that does not mean that they all have to be harvested at the same time. Risk could be spread between catchments.

The coupe size could be reduced. The bottom slopes and riparian margins could be harvested last, after the slopes above have regained canopy coverage. Early and dense replanting could reduce the period of vulnerability. Some foresters are advised to wait a year before replanting so that the weed competition can be sprayed out. Longer rotation times also reduces the proportional period when slopes remain vulnerable. This would mean, for example, six years of vulnerability in a 35-year rotation instead of six years in a 27-year rotation. In a period of just over 100 years there would be only 18 vulnerable years instead of 24.

At the time of writing the NZ Forest Owners Association has announced that they are reviewing best practice guidelines for harvest slash management. Their President, Peter Weir, also said that different silvicultural planning, improved forest engineering and harvest management in sensitive landscapes will reduce the risk considerably. But what about alternative species that coppice, or continuous cover canopy? Both of these have been talked about as alternatives to clear fell pine regimes.

Alternative species which coppice might include coastal redwood, some eucalypts, poplar and Tasmanian blackwood. However, these species are generally more site specific than radiata pine and would not do well in high exposure conditions. They also require more intense management.

There are many unknowns about best practice and economic performance of alternative species. Remember that slopes which are already eroded have much less fertility, and that wind, salt or snow exposure might be high. Farm foresters know that redwoods and blackwoods like sheltered damper soils.

Redwoods are renowned for their soil holding capacity, and according to Rowan Reid, are substantially better than blackwood, pine or eucalypts at preventing tunnel erosion. Some of the stringy bark eucalypts are tolerant of lower fertility and some exposure, and are known to mill well and to produce durable timber. It is these species, such as Eucalyptus muelleriana, E. globoidea, E. microcorys and E. pilularis rather than the ash group eucalypts such as E. regnans, E. nitens and E. fastigata that we should be investigating.

The Drylands Forestry Initiative is strongly promoting their pick of stringybark species for widespread planting under the billion trees programme. Perhaps the non-coppicing Douglas-fr also sits comfortably with the alternative species, more so for cooler high altitude areas because the roots are more durable than pine and rotation times will be much longer. However, Nelson Forests are so unhappy with the economic returns for Douglas-fir that they are no longer planting it. 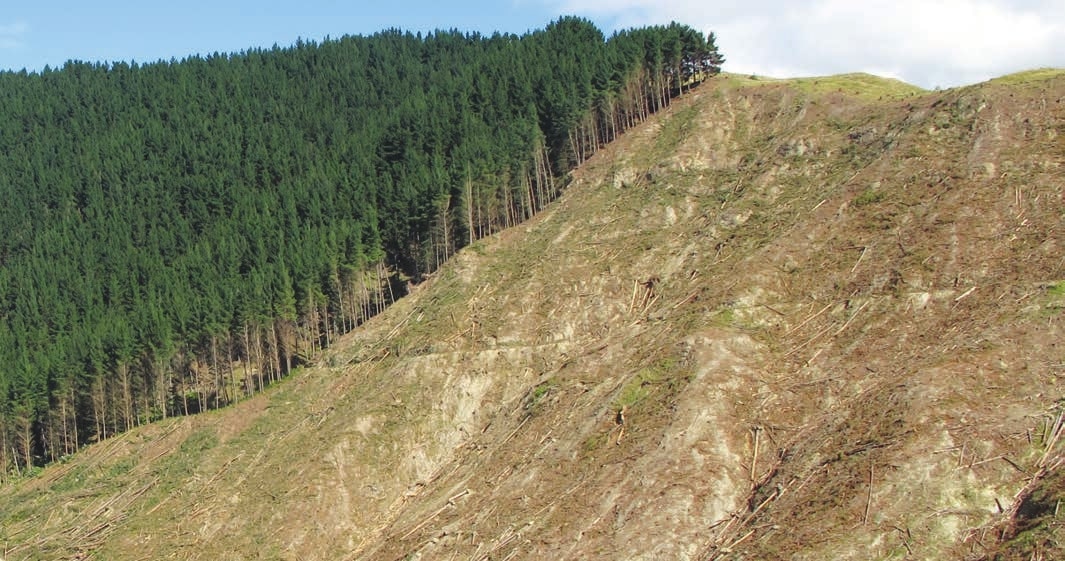 Continuous cover or continuous canopy forestry can be carried out with radiata pine as demonstrated by John Wardle at Woodside Forest, but suitable harvesting techniques for steeper land have not yet been demonstrated as an economic reality in New Zealand. That is not to say that cable systems or tethered harvesters could not be economically used for small coupes compared to hauler systems, it is just that no one has yet proved it.

The continuous canopy forestry system used by John Wardle is based around harvesting individual trees when they reach a target diameter of 50 or 60 centimetres at breast height. John currently uses ground-based harvesting and an excavator with a feller-buncher processing head. However, with the larger diameter trees directional felling has been difficult with the machine. Manual felling in combination with winch assistance, a tracked skidder and mechanical de-limber is now preferred. John says that harvest costs are not much more than clear fell harvesting.

A forest which began as even aged would be partially harvested every few years as sufficient stems grew large enough to warrant harvesting. This might begin as trees were in their early twenties. The oldest and slowest growing trees might be 50 or more years old by the time they are harvested. Initial stocking rates might be as high as 600 stems a hectare. Regeneration at Woodside takes a while to get going, depending on the amount of light, but is definitely vigorous and plenty of it after a couple of harvest cycles. Wind-throw of remaining stems has not been a problem.

John’s current system clearly retains a lot of the ecosystem services that intact forests can provide but has not been specifically optimised to minimise the risk of land slip. A current Sustainable Farming Fund research programme is investigating how economically viable the target diameter harvest system could be at other forestry blocks in the southern North Island.

On a steeper site I could imagine a variation of the fifth-row system working for tethered and remotely controlled harvesters. That is when the stand has reached around twenty years old and lanes are opened up sufficiently wide for a tethered harvester with feller-buncher head to operate. This could then reach in up to two rows on each side to select the larger stems and pull them into the lanes, then cable-hauled or shovelled to the nearest road or landing. Similar cable logging systems are used in Europe.

Logs are usually de-branched in the forest. The lanes would be kept permanently open as they would be used every three to five years for partial harvesting. Selecting a smaller size of mature tree, such as 50 centimetre diameter at breast height may well improve cash flow and improve discount rates. I do not know if it is possible to tether a harvester over steeper slip faces. Perhaps manual tree felling will still be required in some areas.

Another variation of protection and carbon forestry is called the Permanent Forest Sink Initiative. Some harvesting is allowed under international rules, and New Zealand rules are that 70 per cent canopy coverage has to be kept in perpetuity without compromising carbon liabilities. The fifth-row system as outlined above could well work within these limits.

To answer the question posed in the title, does plantation forestry still belong on highly erodible hill country? My answer is definitely yes, but that we have some way to go to reduce the risks. Redwood and stringy bark eucalypts should have their place as alternative species, particularly on the lower slopes. There may well be pockets of red zoned land where continuous canopy forestry forest would be uneconomic to harvest using current technology. These pockets should be considered for retirement.

I have to say that I am unconvinced that manuka plantation, with its relatively shallow root systems, has the ground holding capabilities required. Kanuka a larger and deeper-rooted species would be a better pioneer candidate to transition to climax forest.

Eric Cairns is a long time member of the Wellington branch.