The all-day visit to Tinui was one of the post-conference options offered at the end of the 2011 Masterton conference. I had only met its founder Allan Levett once, but that was enough to convince me to go to Tinui in 2011. Allan died in 2010 so I missed his description of why things have been done at Tinui the way they have, but at least I have now been there.

‘The vision is that Tinui Forest Park will be a model of innovative, sustainable forestry, based on mixed species grown for timber production, and increasingly managed under continuous cover principles − felling and replanting of small coupes rather than large scale clear felling operations. The forest will become profitable from the regular production of a variety of timbers. It will also be managed to provide recreation and a pleasant environment for its shareholders and visitors.’

Tinui is a 306 hectare forestry and grazing property on hilly, formerly pastoral land. The climate is summer dry, with an annual rainfall varying between 900 and 1400 mm, and the geology is largely erodible crushed argillite. Soils are free- draining, and tend to swing rapidly from bog to very dry and vice versa.

Tinui was developed between 1996 and 2010 by Allan Levett, who from the start wanted to create a permanent sustainable multi-species forest. It contains many species needing different management regimes and rotation lengths, and offering a variety of end uses. The core management objective for all species is the production of high quality timber. The aim is to minimise erosion and to create an attractive environment of high biodiversity value offering a home to various plants and animals. Native bush is managed for conservation and damaging pests will be controlled. 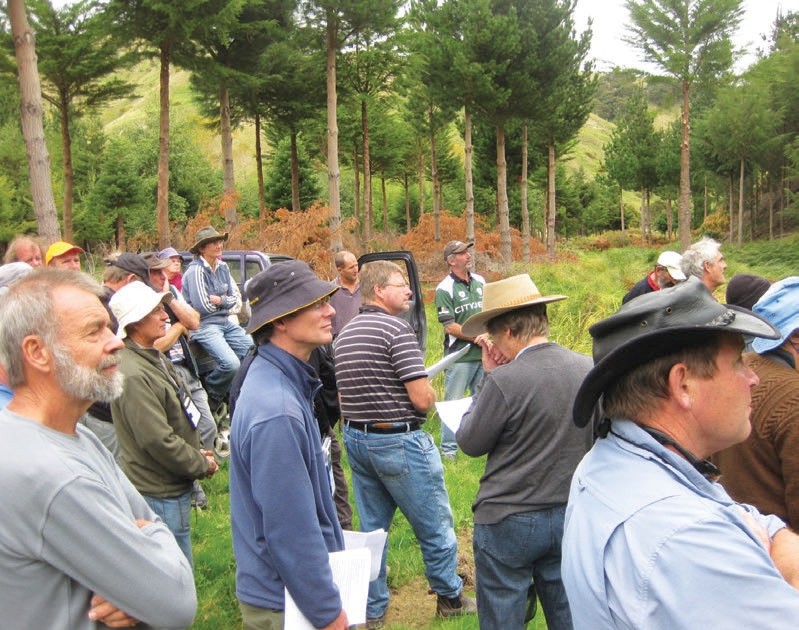 The breakdown of the 306 hectares by land use is shown in the table.

Currently there are four shareholding families, including the Levetts. It is likely that this form of structure will continue, although individuals may change. The shareholders are actively involved in field operations within their scope and regular meetings are held to settle management priorities, budgets and that kind of thing. The day to day manager is Harriet Palmer, described in this context as Allan’s apprentice.

After a week of perfect weather, the day of the visit dawned overcast and damp, but never limiting. We assembled at the headquarters building for an introductory talk on the project, being first introduced to a very fine seat of swamp totara in memory of Allan. We then had demonstrated a couple of new self-setting traps, one for stoats which gives 12 in succession via a hammer blow to the head, and another for possums, the ‘Henry self setter’, described as expensive.

The tour notes covered a large number of possible stops, of which time and the length of discussion permitted only three along with the introduction and lunch at the headquarters. Those three − radiata logging, macrocarpa and eucalypts were interesting but they do not on their own give the full picture of the variety on offer and mostly missed. I have therefore included most of those other stops as if we did indeed stop, using views from the car window and overheard comment to bolster the written notes, endeavouring also to answer the questions included in them.

The first stop was at a logging operation, taking out a small area of 1985 radiata, planted by a previous owner as erosion control on a slump described as ‘the cure of the day’.

Continued soil movement had left many of the stems swept, downgrading the yield. The work was managed by Forestry Owner Marketing Services Ltd of Fielding and one of their directors and also Tinui’s harvesting manager, Marcus Musson, talked to us about the operation and the log market in general.

Since then the operation has finished, yielding 809 tonnes off approximately 1.5 hectares, 75 per cent going over the wharf to China and the rest to mills in Upper Hutt and Masterton. Full details of the harvesting are given in the article on page 29.

Replanting will be done in autumn 2012 with redwood at 4.5 metre by 4.5 metre spacing, with intermediate rows of nurse radiata, linking up with an adjacent 2010 redwod planting. Natives and possibly some willows will be used to stabilise stream banks. Weed growth and any regenerating pines will be sprayed off before planting in autumn 2012.

The next stop was with the cypress, eight comparative plots of 1999 macrocarpa and lusitanica, with radiata planted on the ridges in the same year and added in places as a blanking in 2000 in areas of poor cypress survival and as an alternate nurse row. Removal of the nurses, either by ring barking or felling, began in 2005, and they now feature in only one plot where cypress growth is much suppressed. There was also some early damage by bulls, an accidental invasion to be avoided at all costs in cypress stands where the trees are very susceptible to bark stripping.

The plots were pruned to between 3.2 and 6.9 metres, illustrating the varying vigour of the provenances, with a desired final crop stocking of 300 a hectare and a 45 year rotation. On being asked for a preferred pruning height, the answer as I recall was ‘as high as you want to go’. The two winners appeared to be those in the table below.

A distinguishing feature of the plots, 12 years old and still densely stocked, was the lack of canker. In the discussion Don Tantrum made the following points.

What we had seen by this time had engendered much discussion and delay. Lunchtime was drawing near, my driver had other afternoon engagements and was getting twitchy, and the next few stops are just a blur – did we even stop? 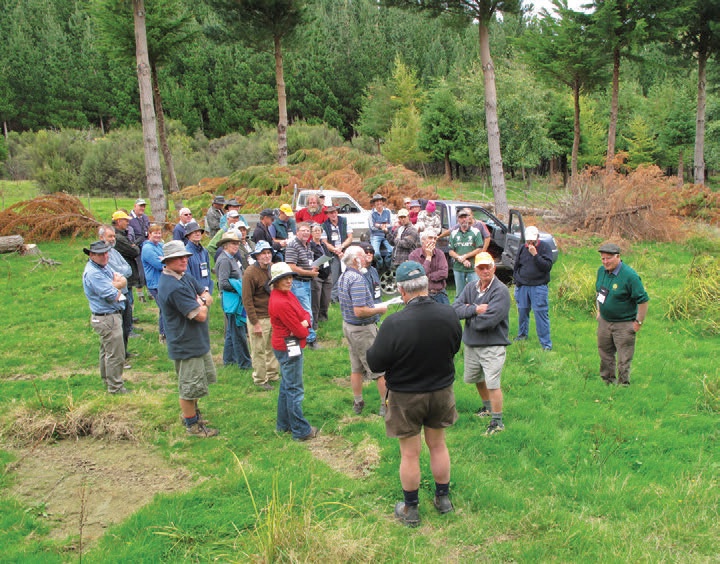 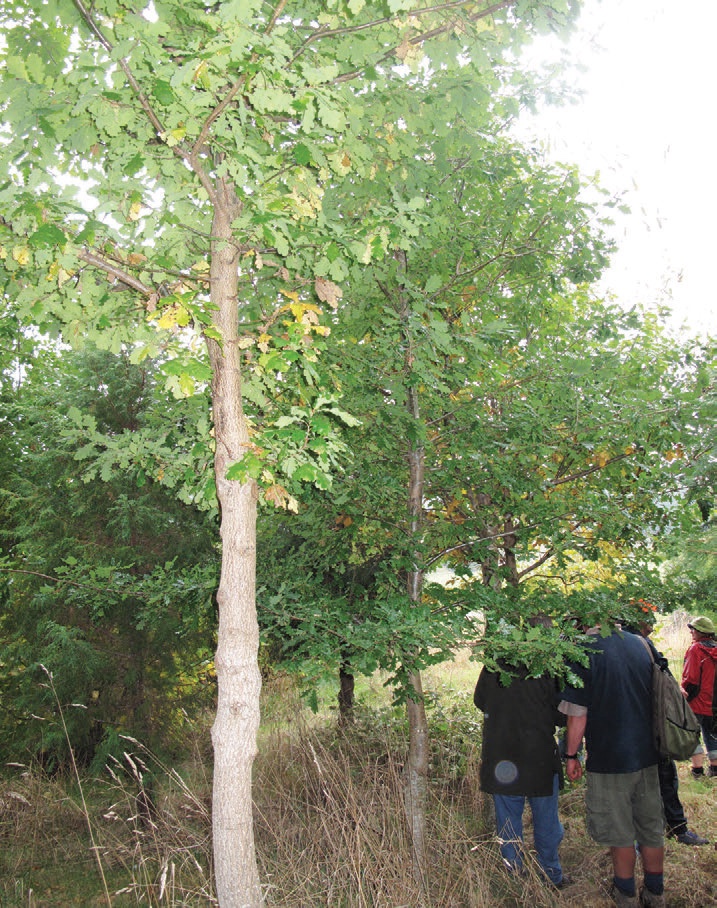 This stop was for redwood Sequoia sempervirens and Sequoiadendron giganteum planted in 2000. There were two questions in the notes:

Then we came to Kotu eucalypts planted in 1999 with radiata pine nurse rows planted at four by eight metres in 2000. In 2008 the nurse radiata were removed. Again, we sped past, which was a pity as I would have liked to see the fastigata and obliqua, two that do grow in Southland.

The question is asked in the notes was − Are nurse crops as difficult to manage as they are rumoured to be? What is the purpose of a nurse crop? One simple answer is cost – to reduce the need for expensive plants by diluting them with something cheaper, for example redwoods amongst radiata. Another is to help a more delicate species to get established by providing a forest environment from the start.

The problem comes when the nurse species is the faster grower. That means that there comes a time when the nurse trees have to go or they will themselves become the crop, too big or too beautiful to remove. So the difficulty is a philosophical one, of executing the original intention, no more than that, but often looming large none the less.

There was a very quick stop on an exposed ridge for Douglas fir planted 1997. Douglas fir does not like exposure so hopefully quality gets better off the ridge. The place for Douglas fir in the Wairarapa is debateable. It is an easy-care no pruning, utilitarian species with good strength qualities, fitting framing requirements better than radiata. It can extend the planting contour higher up the hill than radiata, but is generally less versatile in the market.

I missed the next stop with poplars. To me, poplars in the North Island always seem to be leafless, presumably poplar rust and reflecting the timing of farm forestry conferences. It could be explained as a last pastoral gasp at preserving grazing in places where over-enthusiastic clearance has led to land collapse. There has to be a better way. What is it?

I missed the next stop as well − Eucalyptus bosistoana and radiata pine planted in 2001 in separate stands. The eucalypts are described as having very poor form – the perils of seedlings − despite good shelter from the pines. It was a pity to miss it as radiata makes up over 70 per cent of the planted area, and this was a place where we might have discussed its role at Tinui.

The conifer trial block and the west trial block were again both missed. The conifer trial block was planted in 2000 and the list of species is interesting, although most belong in an arboretum which could well come with time. In general the majority Abies silver firs, Picea spruces and Tsuga hemlock are, in the New Zealand scene, utilitarian species unlikely ever to develop great market value. On the other hand the cedars, as with cypresses, do have a good market potential for farm foresters.

The west trial block planted from 2006 onwards is an even more eclectic mix of species − acacias, Cryptomeria japonica, Chamaecyparis obtusa and Larix kaempferi from Japan, eucalypts, a wide range of natives, and many introduced broadleaves including alders, ashes, blackwood, robinia and walnuts. Is it another arboretum in the making?

Picketts Flat was planted in 2010 under the Afforestation Grant Scheme. Tinui tendered a price of $2,400 a hectare, which covered the cost of planting including fence repairs and track work and a first release. There are 11.6 hectares made up of four separate blocks of radiata pine, cypresses, eucalypts and redwood. There is some need to blank the cypresses and redwoods.

Stop 10 was an excellent lunch.

The afternoon was dominated by a visit to two adjacent eucalypt trials. One is an FRI eucalypt species trial FR 458/7 planted in 2003, the other the NZFFA Eucalypt Action Group stringybark trial planted in 2004. Hopefully the visit will be more comprehensively written up elsewhere either in the Tree Grower or in the newsletter as by the time we climbed to the trials, this scribe was both laggard and exhausted.

Too much for one hit

It was a most interesting day, but too much to take in in one hit, with 16 items on the menu. We should have camped at Tinui for at least three days to see and properly discuss everything, a day for radiata and cypresses, a day for eucalypts and another day for everything else.

Two items stick in my mind − the use of radiata pine or any other as a nurse species, and road lines. I have written already about some of the problems with nurse trees, at best they are possibly only needed in the early days on an exposed site. After that and under a continuous cover management regime where the forest climate is maintained, the need should become much less.

A forest needs tracks from the start. In due course some of these tracks will become harvesting roads. Should we at least put some of that early tracking in on a harvest grade line before planting, when we can see where we are going? It is not nice when later you have to cut a swathe through standing trees to get the right line.

But this is just carping. Congratulations to everyone concerned at Tinui. The ultimate job will be to market all that great variety of species, but on the doorstep of Wellington, why not? 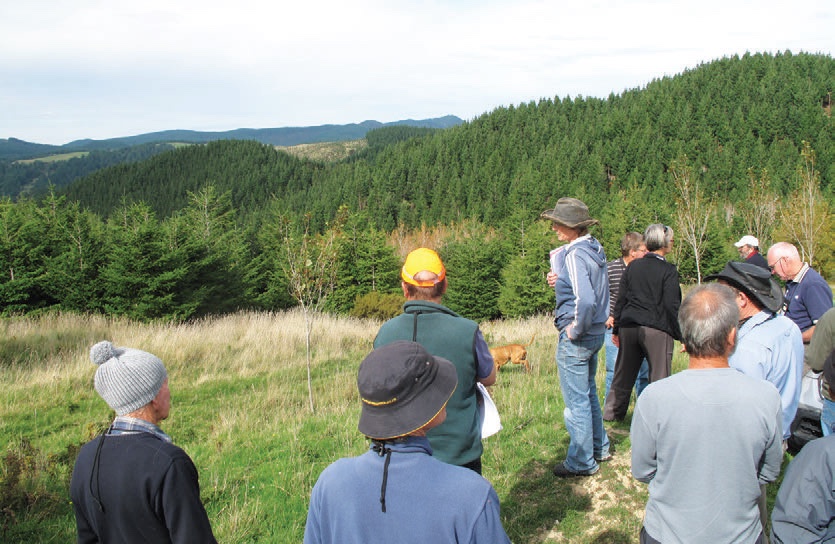