Whatever happened to Paulownia?

Back in the 1990s, Paulownia was hot. A quick growing hardwood tree that originates in China, Paulownia timber has been highly valued in China and Japan for centuries and trees had been grown in New Zealand for over a century. Around 1990, selectively produced root stock of the cultivars P. elongata, P. fortunei and P. fargesii was being promoted hard as the answer to a farm forester’s dream.

Whatever happened to Paulownia?

These trees were said to be able to grow six metres in one year and mature for milling within seven years. One entrepreneur with nursery connections was said to have sold 60,000 seedlings at this time, and Paulownia was all set to take off. Unfortunately, Paulownia requires a totally different recipe for establishment than most other tree crops, and it does not appear that many of these enthusiastic plantings have survived.

For those that have, prospects are now looking favourable for the timber, even though the lucrative Japanese market that was initially talked about has not eventuated. The main reason for this is the Japanese prefer slow grown northern hemisphere timber which has growth rings around three millimetres apart. Fast plantation grown New Zealand Paulownia has growth rings approx 40 mm apart, so the timber is not suitable for joinery and other traditional Japanese uses. However, this makes it more suitable for a different range of uses which New Zealanders are much more familiar with, such as boat building and other marine construction.

The timber’s characteristics are – lightweight at 250 kg per cubic metre, light in colour, stable, easily machined and glued, attractive and stains well. Some describe the timber as being halfway between balsa and poplar in density.

Because of these characteristics, the timber is also reputed to be the most suitable for surfboard construction, and the internet is now scattered with environmental surfers who are switching to Paulownia boards. A number of yacht designers and boat builders are also specifying Paulownia in their work and members of the NZ Sea Kayak Builders Group have crafted some works of art using Paulownia in a strip planking method. Recently, some New Zealand sports equipment manufacturers have switched their production from polystyrene foam use to Paulownia, to the extent where New Zealand demand for the timber has necessitated imports being sourced from China.

The market for Paulownia timber in New Zealand is currently still small, but it is developing. The timber is retailing for between $1,750 and $2,400 per cubic metre.

There is also demand from overseas markets such as Australia, the US, India, Thailand and Vietnam, but guaranteeing quantity of supply and meeting specification are issues that need to be sorted out.

Paulownia trees are a bit fussy when it comes to their growth location. They like free draining soil, shelter from wind, moderately high summer temperatures, high humidity and constant access to summer moisture. To establish the trees, new plants can be struck from root cuttings taken in late winter. These should be planted in a sheltered nursery environment, spaced at one metre apart in early spring. If managed correctly the cutting will grow into trees around five metres tall by the onset of winter.

During the winter after the initial summer growth, the rooted trees should be planted out at a spacing of approximately six metres in the selected plantation area. Once established in their final resting place, the five-metre pole provides the butt log, and should provide half a cubic metre of timber within eight to 12 years.

The best place to buy rooted stumps is from Daniel Reid at www.productive-trees.co.nz.

Rod Laurence is a grower of Paulownia on a lifestyle block near Hamilton. He grows, mills and sells Paulownia timber to what he describes as a steadily increasing market.

Robert Shaw, Head of Marine at Unitec Applied Technology Institute, Auckland designs and builds sportboats, including this one called the Custard Truck. The hull of this boat is built from Paulownia with a carbon fibre skin outside and E-glass skin inside. He finds that this timber is excellent for building this type of boat as it is light, strong, stable and durable. It was very good when On the water Inside the hull during construction laminating the carbon fibre and fibreglass skins over it, providing an excellent bond between the timber and laminate.

This boat is currently the fastest sport boat in New Zealand. In November it is being shipped to Hong Kong for the inaugural Asia Pacific sport boat regatta. 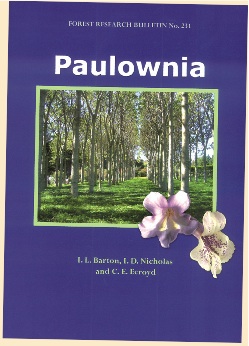 The NZFFA set up the Paulownia Action Group in 1989 under the auspices of the NZFFA and the NZ Tree Crops Association.

The aim was to provide landowners with independent information about Paulownia, and the group was active until 1996, responsible for the production of many newsletters, leaflets and seminars.

However while a few successful plantations have been established in this country, many attempts failed. Now Ensis has produced a bulletin that summarises knowledge about the growing and management of Paulownia in New Zealand.

Paulownia, written by Ian Barton, Ian Nicholas and Chris Ecroyd, is a resume of the findings of the Paulownia Action Group. As well as information about the history of the species, a guide to species recognition, breeding, establishment, silviculture, growth and yield.

A highlight of the handbook is a chapter on Paulownia in China containing detailed information gained by Ian Barton and Ian Nicholas during their 1991 study tour of China.

Lavishly illustrated with photographs, this handbook shows that Paulownia can be regarded as a multi-purpose tree with potential for use as a short rotation timber
species when grown under specific New Zealand conditions. To obtain a copy of the book, price $22.50 including GST, contact publications@scionresearch.com.