On 20 February fifty people converged on Tinui Forest Park to hear more about the MPI Sustainable Farming Fund target diameter harvesting project. There was a good mix of representatives from farm foresters and regional councils as well as forest management, harvesting and marketing and log transport companies. The outline of this study was covered in the February Tree Grower.

The aim of the project was to establish whether a continuous cover forestry system – target diameter harvesting − would be practically possible and economically viable in the lower North Island. Target diameter harvesting is practised successfully by John and Rosalie Wardle at their Woodside property, North Canterbury. The field day at Tinui Forest Park aimed to present some of the main findings of the project to interested people.

Chris Perry, a PF Olsen Regional Manager, led us through the main study, explaining that for each of the four study sites, the data describing the present state of the forest was used to predict future yields of the forest by log grade. This data was then modelled by Denny Du, using discounted cash flow investment analysis techniques, to compare the optimal financial result for clear felling versus target diameter harvesting, or selective harvesting, over a 20-year period.

The discount rates, tree target diameter to harvest trees when their diameter at breast height exceeds 45cm, 50cm, 55cm or 60cm, and the harvest interval could all be varied to compare modelled results. Target diameter harvesting involved a higher cost per tonne. It was around $10 to $20 a cubic metre more than clear felling in addition to the higher management fee. Road construction costs were difficult to predict.

There is a lot of detail to be considered and the reader should look at the NZFFA website for more information. A copy of the Excel model, with representative data, is also available for users to see how changing the various parameters affects results.

When considering target diameter harvesting as a silvicultural and harvest method, it is important to remember that under target diameter harvesting, only the largest stems are harvested. These earn premium prices, so the average sale price per cubic metre is higher than the average price after clear felling. This is offset by more expensive harvest costs for selective harvesting, some reduced economies of scale and the cost of money over time. 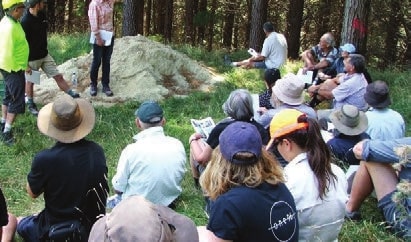 Conclusions from the feasibility study

Overall, the conclusions presented by Chris Perry were −

We agreed that there would be some radiata pine forest characteristics which might lend themselves to target diameter harvesting. These would include −

One important unknown highlighted in this study is how sub-dominant radiata pine trees will respond in terms of growth rate once neighbouring dominant trees are removed. Again, data is lacking in New Zealand and the only way to find out would be to set up some operational trials.

Looking to the future, it was acknowledged that target diameter harvesting may have most potential on sites with high erosion risk using mechanised harvesting systems that have yet to be developed. There was good discussion about alternatives available for harvesting, but there is no getting away from the fact that individual tree harvesting on steep slopes will require new skills as well as some new equipment. The time may be right to start looking at new harvesting systems, building on the work of the Forest Growers Research Steepland Harvesting project.

A continuous cover harvesting variant is small-coupe felling, which is staged harvesting, the sum of coupes being, for example, under a twentieth of catchment over a six-year window. This arguably has similar environmental results, but simplifies harvesting logistics. The subject was not explored in detail, but was favoured by some of the contractors interviewed.

This led on to the presentation by Mark Bloomberg.

Other parts of the day 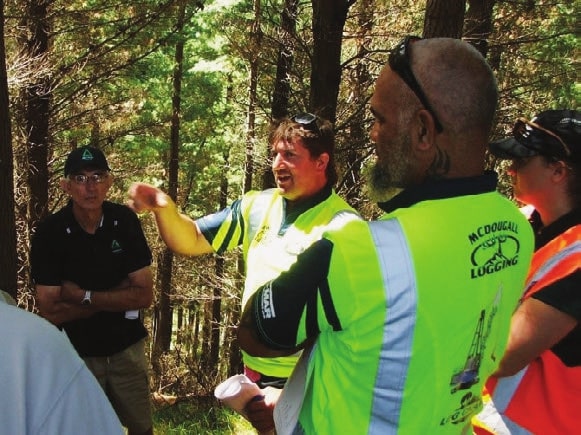 While not part of the current project, there has been speculation as to whether target diameter harvesting can be practically and economically used for harvesting forest on steep erosion-prone land. Mark Bloomberg from the School of Forestry, presented a paper pointing out that about a quarter of the plantation forest estate is planted on erosion susceptible land, and that with current clear fell harvesting, there is a significant period after harvest when the land is particularly susceptible to landslide. His paper will be submitted for publication in the Journal of Forestry.

Mark pointed out that under the Resource Management Act, forest managers are legally required to avoid, mitigate or remedy effects of landslides where clear felling has been a preparatory factor. Under the National Environmental Standards for Plantation Forestry many forestry activities are permitted provided that certain conditions are met, but consent will be required to clear fell harvest more than one hectare of plantation forest on red zoned land. Small coupe felling might be an alternative, but how large is a small coupe?

There are no regulatory controls on coupe sizes in New Zealand, so Mark presented arguments that no more than 20 per cent of a catchment in orange and red zoned land should be harvested in the window of vulnerability up to six years after harvest. If the maximum coupe size was 50 hectares, this would also have implications for maximum rotation age of trees within the catchment which would be up to 54 years for forests greater than 250 hectares.

Potentially a smaller limit on coupe size of 20 hectares might be used, but the real limiting factor was that no more than 20 per cent of the forest could be harvested in the six-year window. Clearly, a 54-year rotation for some trees would affect forest values under discounted cash flow analysis.

Mark then presented target diameter harvesting, rather than small coupe or clear felling, as a means of solving the problem. As target diameter harvesting still retains an intact forest, there would be no restrictions on area harvested. Harvesting of an initially even-aged stand would have to be staged over a 30-year period. Mark did acknowledge that partial harvesting on steep erosion-susceptible land was technically demanding and that suitable logging systems and experienced loggers were not widely available in New Zealand. Case examples for the Wairarapa and Hawkes Bay were then discussed.

Stan Braaksma, Land Management Adviser for Greater Wellington Regional Council, said that any local consent for harvesting forest on erosion prone land would go through the council. He commented that the maps showing land susceptible to erosion produced with the National Environmental Standards for Plantation Forestry are broad brush. In the case of, for example, the Tinui Forest Park, Greater Wellington Regional Council would look at the details using the LiDAR photography they have for the whole of the Wairarapa, along with their own local knowledge.

Generally, land classed as susceptible to erosion can be broken down into much smaller areas of particular land types. This was demonstrated by Stan who showed a reduction of the large red zone area which covers much of Tinui Forest Park to a couple of small, particularly sensitive, earthflows and their associated watercourses.

Therefore, the notion of restricting harvest to a percentage of the catchment would not be their approach for this or similar properties. Stan did not consider that regional councils even had the authority or ability under their district plans to restrict harvesting to a percentage of the catchment. Stan’s hope is that until new higher resolution maps and methods become available, major forestry companies would recognise the risks in harvesting a large proportion of vulnerable catchments at any one time and that they would make prudent decisions.

Final comments and where to next

We believe operational trials are now essential to develop knowledge and efficient management systems for target diameter harvesting and other possible continuous cover systems. Such trials will require commitment from forest owners, harvesting contractors and the research sector. It seems that the time may be right for this.

The project team – Mark Bloomberg, Eric Cairns, Denny Du, Harriet Palmer and Chris Perry, would like to thank all those who have shown interest in the project, and continue to show an interest in alternatives to clear-felling for radiata pine.