The August 2011 snow storms in the southern North Island caught many by surprise. It was not the usual graupel, but large flakes that stuck to things. Many local houses had their spouting removed as the snow slid off the roof. I know of a collapsed implement shed which was fairly new and was a commercial design, and our berry house snapped the corner guy wires, breaking the posts.

We are sheltered from the south and had enough snow to close roads on three successive days. We only had about 25 to 30 cm in total, but it took a week to disappear. Fortunately there was no frost damage and little wind.

The nearby Sargents arboretum in the Akatarawas received nearly a metre of snow, and further up the valley, a significant percentage of 25-year-old pine trees snapped at mid height.

As usual, after such an adverse weather event, I looked at the forest to see what survived and what collapsed, trying to figure out why.

On viewing my forestry and amenity plantings, and observing the number of toppled trees, I might have concluded that damage was due to wind, but this was not the case. Younger trees were worst hit but our medium age pines of 25 years emerged almost unscathed. The dominant 25-year-old eucalypts and blackwoods suffered severe crown damage, but will recover, their butt logs intact. Older totara, kauri, rimu, hard beech, mountain beech and puriri received only slight to moderate damage.

Being an advocate of continuous cover forestry, I am inclined to plant trees into small coupes or gaps in the forest. Therefore my experimental woodlots include totara, cryptomeria, hinoki, ovensii, redwoods, puriri, kauri, macrocarpa and lustanica, various eucalypts and acacias.

Smaller trees not fully above the surrounding scrub were pushed over such as cryptomeria and totara up to three metres tall. The sapling manuka and broadleaf just bent over, and stayed bent. Many 50 mm thick manuka and akeake just snapped. Such tough wood can be surprisingly brittle. Mahoe snapped and toppled causing widespread chaos. Macrocarpa and lusitanica pruned to four metres mostly bent, snapped or toppled. The eucalypt Eucalyptus microcorys at five to six metres tall toppled or snapped, but the more open grown E.muelleriana and E. quadrangulata emerged largely unscathed. Cork oaks lost about two metres of their outer branches. Macadamias and feijoas just fell apart. 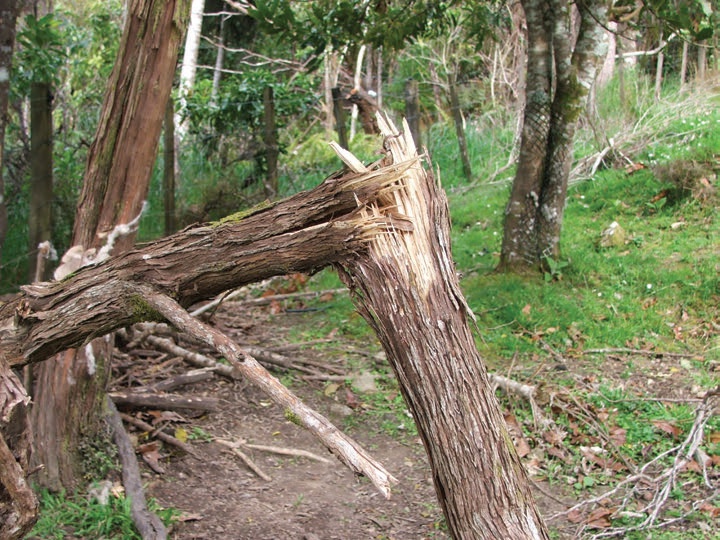 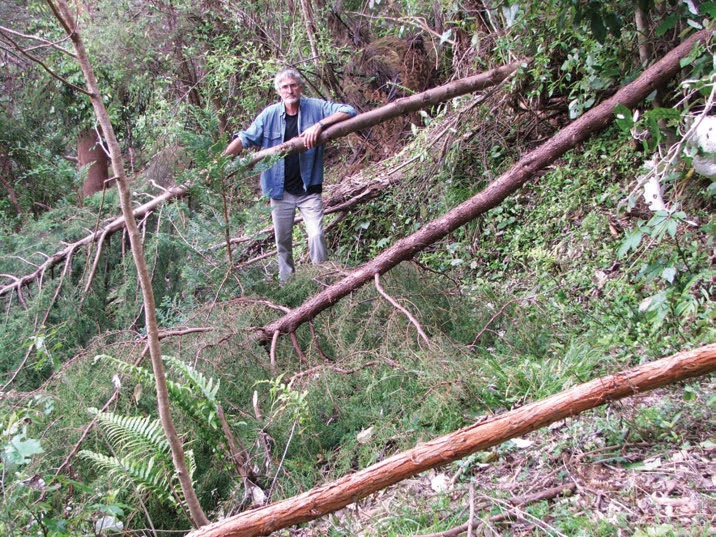 Redwoods, hinoki, lawsoniana, with thin horizontal or downwards pointed branches, just shed the snow and remained standing, even if they were growing in sheltered sites. I have tended to allow competing vegetation to remain around sapling cypress, eucalypts and cryptomeria, and totara to mitigate cicada damage. I now realise the pitfalls - damned if you do and damned if you don't.

Most of the young totara and about half the cryptomerias required guy ropes to straighten them up − 1001 uses for polypropylene hay bale twine. The macrocarpas over seven metres were just too tall to rescue. I have only a few examples of five to ten-year-old Douglas fir but none were damaged.

There are lessons to be learned:

No doubt tree growers in more snow prone climates are bemused by these hard learned lessons, and have their own stories to tell. We may not get another snow storm like this for 30 years, or it may happen again next winter. I am not suggesting you should change species on the basis of vulnerability to freak weather, but management practices can reduce risk of topple due to snow or wind, and selecting the right species for the site is still important for events that might be expected over a 20 to 30 year period. 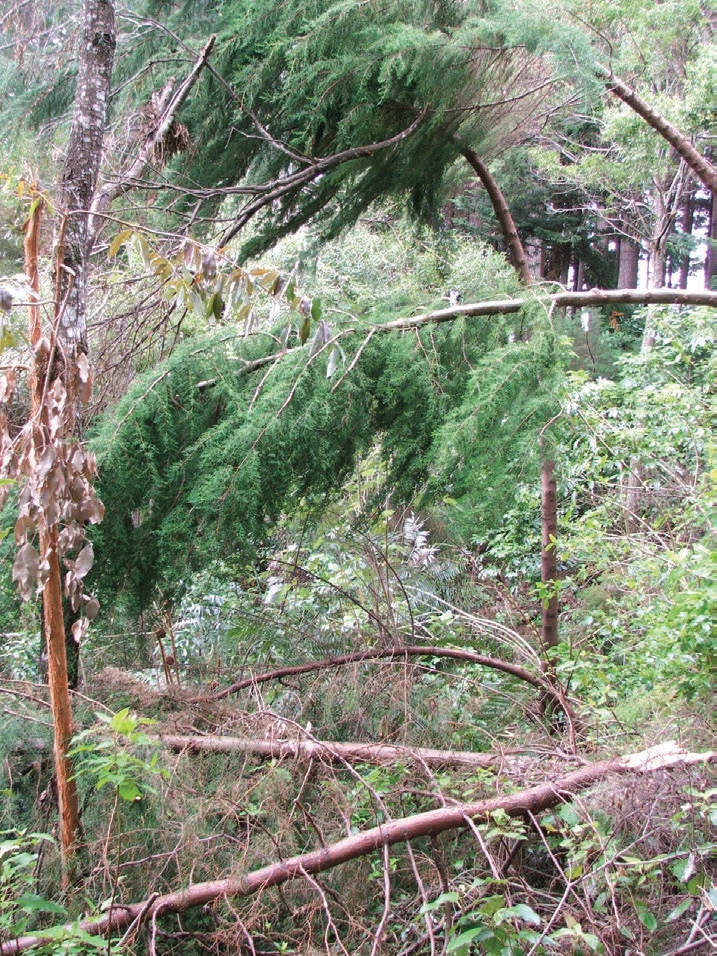 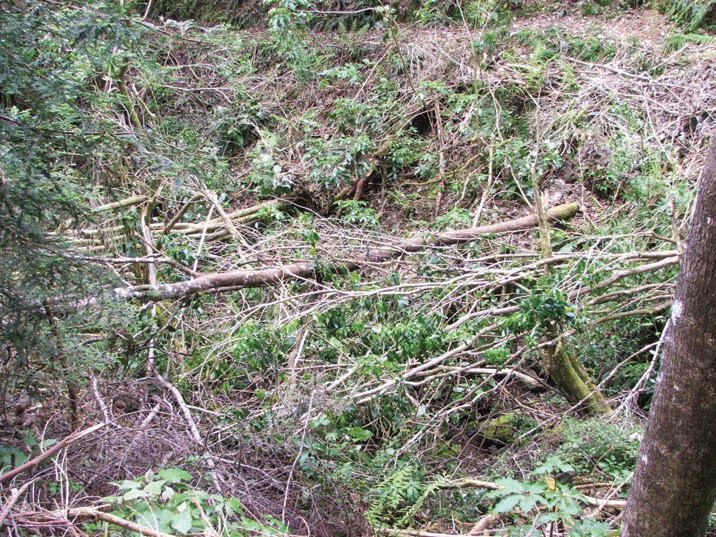 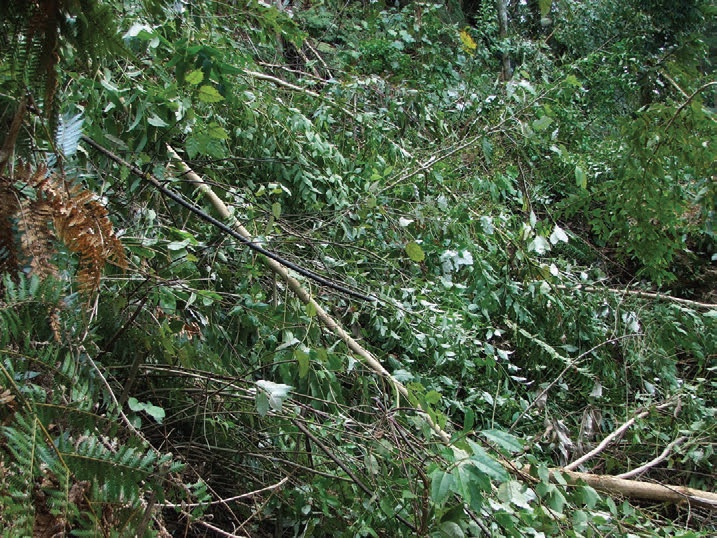