Summerhill Farm is an inter-generational farming and forestry enterprise situated on the Papamoa hills behind Welcome Bay, between Tauranga and Te Puke. It has a total area of 400 hectares of which 244 hectares are planted in forest. David and Chloe Blackley own 70 per cent of the land and the remaining 30 per cent is owned by Gabrielle, David and Cloie’s second daughter, and her husband Andrew.

The property ranges in altitude from 150 to 200 metres above sea level and the rainfall ranges from 1,200 to 2000 mm a year. The soils are volcanic loams over rhyolitic clays.

This farm forestry property had its beginnings in 1959 when David Blackley brought his family up from the Wairoa region to the Bay of Plenty looking for a hill country farm. Their original purchase was 170 hectares and they lived in an old run-down pink cottage with sacks under the eaves to keep the wind and rain from blowing in.

When they moved, David had 1,500 sheep, 80 cows, a wife, a very young child and a leg that had been broken in six places after a horse rolled on him. I think it would be fair to say that determination and a sense of adventure and trying something new and out of left field are some of David’s many hallmarks. If you ever get a chance to read his book Born for Adventure then I would encourage you to do so and you will see what I mean.

Over the next 20 years the best of the land was developed into sheep and beef pasture and the steep erosive slopes that were prone to slipping and scrub reversion were left largely unimproved. David and Chloe joined the NZFFA in 1963 and within two years had planted 40 hectares in pines at a stocking rate of 1000 stems a hectare out on the harder back country of the farm. 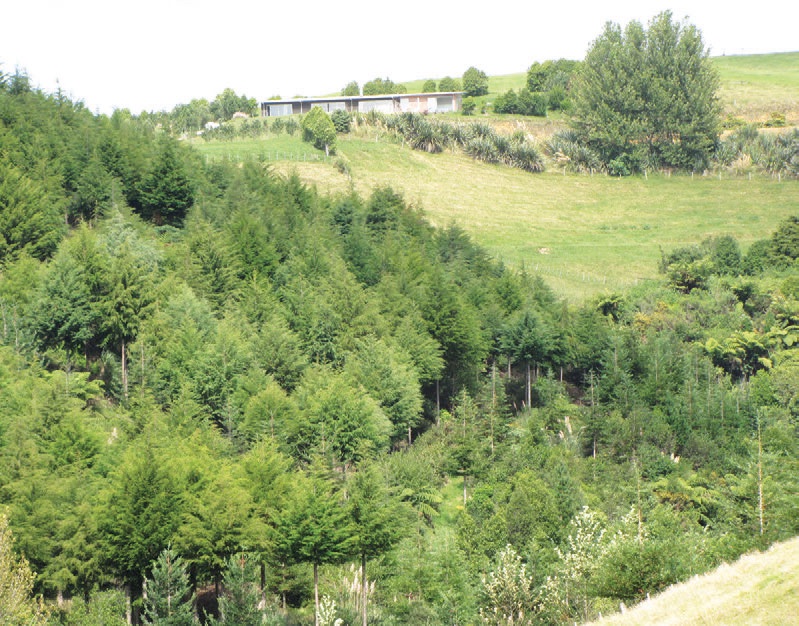 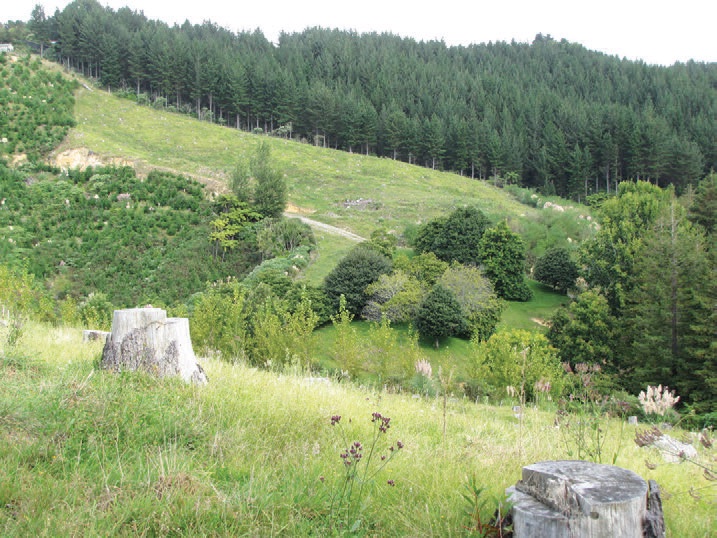 In the 1970s agro-forestry was all the rage and they planted a further 60 hectares at 400 stems per hectare. Those agro-forestry stands gave grazing as well as timber and became an integral part of the livestock operation, especially with respect to livestock shelter. As the canopies slowly closed over and the sunlight was restricted, pasture quantity and quality diminished to the point where there was little or no grazing left.

With the advent of the Korean market in the 1980s these agro-forestry trees were harvested early at age 20. The open spacings had led to large pruned butt logs and equally large branches in the subsequent upper logs. According to David he was sad to be harvesting the trees early, but equally happy to see the big troublesome upper logs gone.

During the 1980s Gabrielle, who had graduated as a landscape architect, influenced David to plant some alternative species. A total of 28 hectares were fenced off and a mixture of cypress, eucalypts, blackwoods, black walnuts, poplars and paulownia were planted. The planting was done alongside the development of Forest Reserch Institutes’s special purpose species research programme and so a lot of silvicultural experimentation took place. These trees now make up the majority of the older non-radiata plantings on the property. 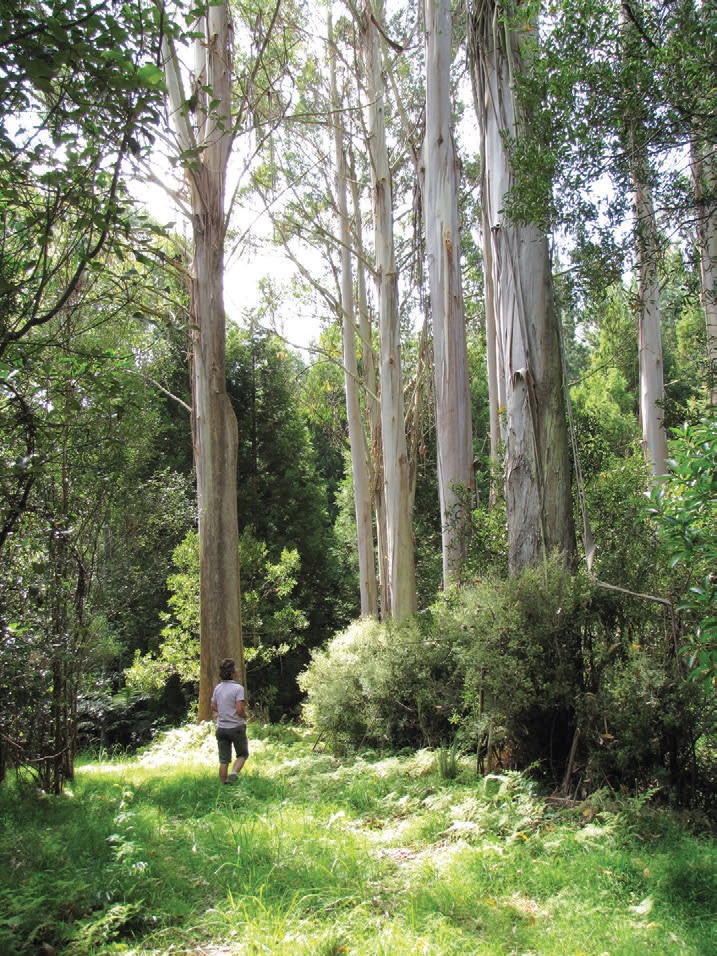 During the late 1980’s some of the earlier pine plantings were ready for harvest, but as David had no desire to be involved in planting the second rotation, Gabrielle and Andrew replanted under a joint venture arrangement.

The planting of these second rotation sites has been a challenge, as the weed competition in cutovers is not to be underestimated.

Ink weed, gorse, pampas and woolly nightshade are just some of the problem weed species that appear out of the slash. Gabrielle has commented that as long as they planted straight after an autumn harvest the trees got away, but if they had a spring harvest and a replant the following spring they were in real trouble with weed competition.

In 2000 the opportunity for Gabrielle and Andrew to purchase the land under a joint venture arose, an opportunity that they took. It is on this site that the hut has been constructed out of poplar and cypress timber milled on the property. Wetlands and dams have been created in a gully bottom which David had cleared with gelignite many years before. Most of the riparian areas are retired from forestry and grazing and planted in natives. This is a significant undertaking in an area that is so prone to weed growth.

A golf course was developed at the top of the property on land that David had previously had a chestnut orchard on, and subdivisions and sales have subsequently taken place. This part of the property has panoramic views out over Tauranga port and the coastline of Papamoa, and the subdivisions and replanting of the forest cutovers have had to be dovetailed in a way that makes future use for all parties viable. Placating the wants of neighbours in what is a peri-urban environment is not for the faint hearted, and planning to future-proof forest plantings and any issues around harvesting is a real challenge. 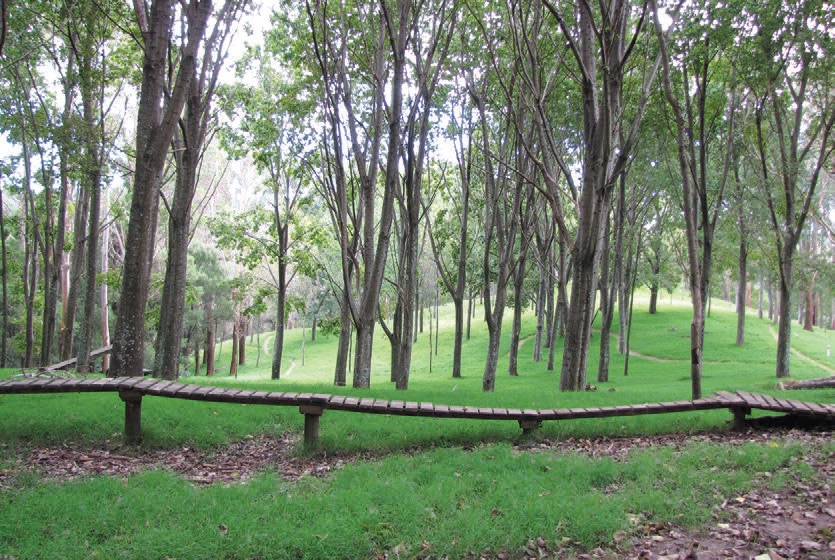 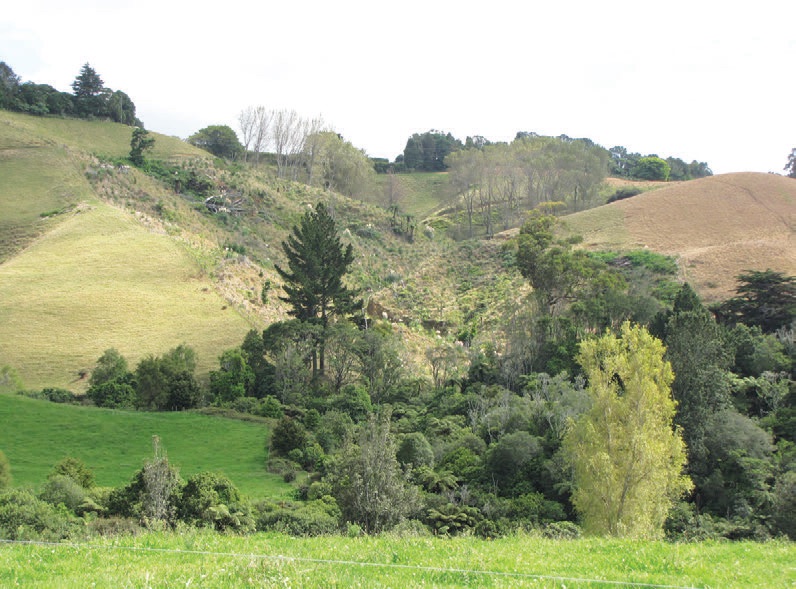 The harvesting of much of the first rotation radiata has meant that there is now opportunity to replant with a mix of other species, especially in areas that are close to the road or may affect on the views from houses and the subdivided areas. These areas include plantings of redwood, poplar and cypresses, with special care being taken to put in edge trees with high visual appeal or coppicing ability so that height can be managed in the future should the need arise.

Planting to match the land form, and predetermined vistas for future house sites are all part of the mix, along with access corridors for livestock and the public. David has had much of his grazing land leased out, but has recently adopted a policy of taking back the leases at their expiry and managing the grazing himself.

The challenge in matching land type to land cover is clearly illustrated on this property, and consideration must be taken of the economics of fencing for sheep or cattle when a mixed farm and forestry operation is considered. Trees by their very nature do not stray, but sheep and cattle are exactly the opposite. The one thing that this property is doing is getting over the minimum threshold for area in all the different ventures that it is undertaking, whether it is tree species or livestock. It is when the decisions could go either way in terms of long term use that it can get difficult.

When you move around this property you begin to see the evolution of forestry practice in terms of both regimes and species. The old growth radiata monoculture is slowly giving way to younger stands of improved radiata, or being totally replaced with stands of other species such as cypress, redwoods or poplar. It is starting to take on a park-like appearance in some places, with some cutovers being returned to pasture where the contour allows and some bits of previous pasture being converted to forest or retired for native enrichment.

In 2000 Gabrielle and a group of concerned locals managed to persuade the regional council to purchase a neighbouring property as a regional park. Contained within this area is a nationally significant hilltop pa site that covers many hectares. With the demands for increased public access, David and Chloe opened the front of the farm for passive recreation including mountain biking, walking and horse riding. This venture is run by the Summerhill Recreation Park Charitable Trust.

David and Chloe also have established a free youth academy where children aged 12 to 13 can come and build skills and confidence. The pupils involved attend for one day a month over the period of a year. It seems that the activities offered here have caught on with the local public because in 2005 there were only 800 visitors a year, whereas in 2010 there were 3,000. 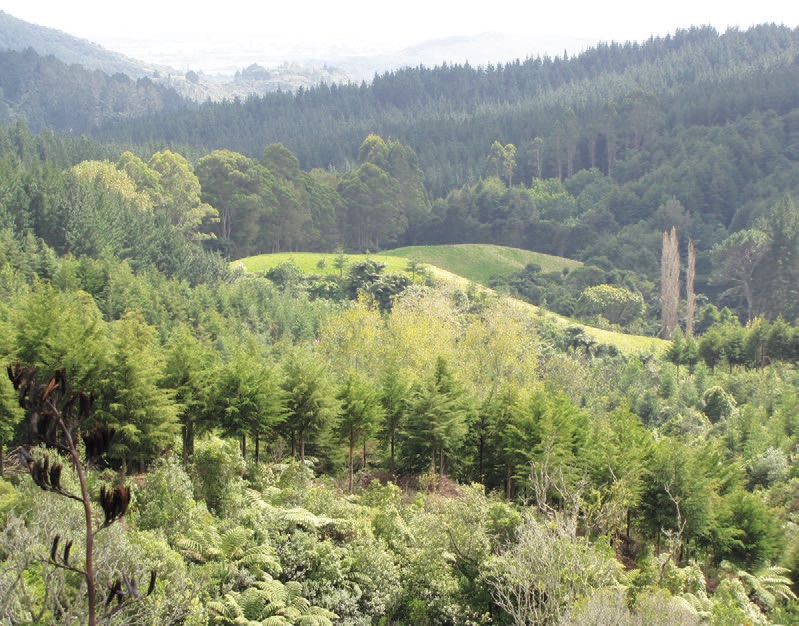 These sorts of ventures are not without their challenges. But when you consider the educational value of having a working forest with public access right on the boundary of one of our fastest growing cities, the spin-off for the commercial forestry industry is significant.

People learn that the harvest of a woodlot is not necessarily a sad end for the old trees that once grew there, but in fact a new beginning for another generation of trees that follows the first. For many who visit Summerhill this would be their first contact with a working forest or farm property.

This family is a very worthy recipient of the Farm Forester of the Year Award. The owners have managed to step over the inter-generational transfer issues, and the property is going from strength to strength. Innovation has always been to the fore here and it shows no sign of stopping. Long may it continue.