In the mid to late 1970s no farm forestry visit to the Bay of Plenty was complete without a visit to the Tikitere agroforestry trial. Within a decade or two the trial became even more important to foresters as it provided important information on the effects of final crop stocking on tree and wood quality. The main person behind this world-renowned trial was the late Leith Knowles who was instrumental in taking the vision to completion. The Bay of Plenty Farm Forestry Branch felt it appropriate to summarise the main findings of this trial to honour the legacy of Tikitere and the contribution that Leith made to the trial and to the local branch.

The good design and breadth of data collected from the trial provided a foundation for much of the radiata pine knowledge used in forestry today. The Tikitere project was a 93 hectares agroforestry trial on land owned by Paehinahina Mourea Incorporation, between Hell’s Gate thermal reserve and Mourea, Rotorua. The trial began in 1973 and the final trial data was collected in 1999 when the forest was logged.

The initial impetus came from forest researchers such as the late Harry Bunn, Wink Sutton, our association patron, Bob Fenton, John Tustin and the late Leith Knowles. From the agricultural sector, Dave Joblin and Ian McQueen were instrumental in seeing this project get off the ground.

The project was considered to be the largest and most comprehensive agroforestry trial in the world at the time. Considerable resources were pumped into the trial, until the tree canopy took over. The trial was also considered to be a model of cooperation between two government departments, the Forest Service and Ministry of Agriculture Research Division. 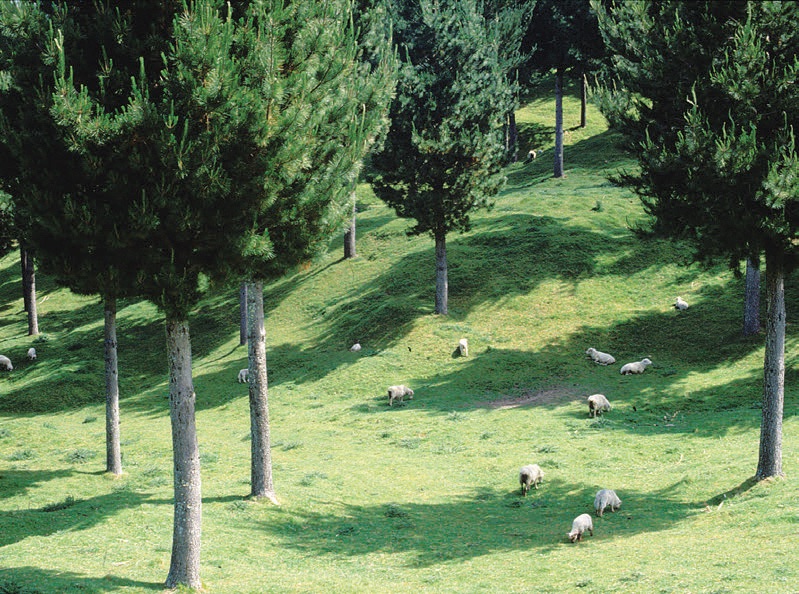 The Tikitere trial was established to examine the combination of radiata pine forestry and understorey grazing. There were tree stockings of 400, 200, 100 and 50 stems per hectare, as well as open pasture and 100 stems per hectare in twin rows. The trial was well replicated and covered land ranging from flat to steep sidlings. The research objectives were to −

The trees were planted at five times the final stocking. Crop trees were pruned to six metres in four or five lifts. Cull trees were thinned to waste at each pruning. The last pruning and thinning was in 1981. Thinning and pruning debris were left in situ to simulate hill country conditions.

The trial was affected by three major storms − Cyclone Alison in April 1976, Cyclone Bernie in April 1982 and Cyclone Bola in March 1988. Useful results were obtained from an examination of damage resulting from these storms.

The results of the project

As the tree stocking became higher there was a greater the volume of wood per hectare. Basal area growth was about 40 per cent higher up to time of canopy closure than we would expect on similar, but non-farm sites. Volume growth rates at the highest stocking were averaging about 53 cubic metres a year over the last 14 years of the rotation. This is approximately 22 tonnes a hectare of dry matter in the stem wood. Lower tree stockings produced a far greater individual tree diameter, but this did not compensate in terms of volume per hectare for fewer trees or for the substantial loss in height.

Both stem and branch size increased with lower tree stockings. At lower stockings, branches were one to two centimetres larger than predicted by older branch models. Using this information, new relationships were developed and incorporated into new models. 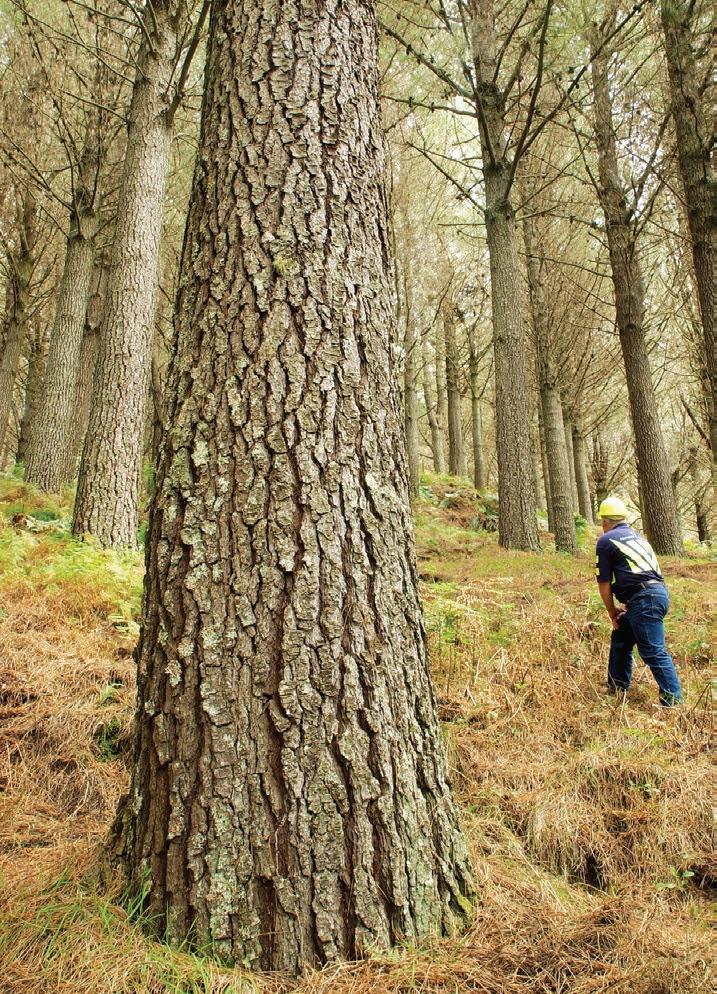 To ensure a small defect core in pruned logs, pruning has to occur earlier and more often than on non-farm sites and variable lift pruning is recommended. Stem straightness and the incidence of broken tops were greatly affected by three major storms. However, there was no significant difference in butt log sweep between the stockings. The degree of breakage caused by the storms was closely related to the tree stocking, with low stockings incurring major damage, and higher stockings being largely unaffected.

Concern was expressed about the wood density characteristics of some Tikitere trees. Comparison of Tikitere results with other trials indicated that −

This was explained by the higher proportion of lower density juvenile wood to higher density outer wood in the higher stockings.

Over 1000 mouldings were sawn, and were found to contain 5 per cent resin pockets and 68 per cent blemishes. A greater proportion of the mouldings produced from the faster grown logs contained resin pockets, blemishes and internal checks irrespective of drying schedule. In the unpruned logs, 38 per cent of timber lengths were affected by resin pockets. Visual grades were poor, whether rated for structural use or for cuttings grades. Machine stress grading also gave poor results.

Stumpage value of the treatments in 1994 at age 21

It was estimated from the data that over a quarter of the grazing on open pasture would be available at 200 trees per hectare, when summed over the lifetime of the crop. The seasonal distribution of pasture growth did not alter greatly with increased tree stocking. However there was a tendency for increased late summer production and decreased spring and early summer production.

As well as declining pasture production, pasture composition changed with increased tree stocking or age. Clover and ryegrass decreased in proportion, and inferior grasses increased. There were substantial areas smothered with decaying pine needles in the treatments with higher tree stockings.

When trees are planted on to farmland there is a gradual accumulation of understorey tree litter comprising mainly of partly decomposed or undecomposed pine needles.

In the study there was a progressive reduction in mineralisable nitrogen. Increasing tree age and stocking increased soil acidity. This was particularly pronounced near the surface, and was probably caused by organic anions from decomposing pine needles, and possibly associated with a decline in earthworm populations. In 1998, surface pH was 5.5 in open pasture compared to pH 5 at 400 stems per hectare. However at a depth of 150 to 300 mm, the pasture was pH 5.6 but pH 5.4 at 400 stems per hectare.

Surface phosphorus and sulphur levels increased under trees but magnesium and calcium declined. By 1998, earthworms had disappeared at every tree stocking including the lowest. The declining earthworm populations and soil pH indicated significant changes in soil biological activity which may influence post-harvest management if the tree crop is to be replaced by pasture. In other words it may be necessary to add lime, inoculate legumes and re-introduce earthworms.

Macroscopic fauna associated with pasture declined with increased tree stocking. Microfaunal populations followed the same trend, with a decline in nematodes under the trees. Mycorrhizal fungi normally associated with forest sites had been replaced on agroforestry sites by two less common types.

With increasing tree age or stocking, animal performance declined. This was probably because of a reduction in the white clover content of the sward, an increase in gastro-intestinal parasites, and an increase in litter intake.

This trial represented an extreme situation, as livestock were carried under a given stocking of trees for their whole lifespans. In practice, livestock would be spelled on open pasture, and reduction in performance would not be so pronounced. The effects would be minimised by offering higher allowances, to provide greater feed selection for the stock. 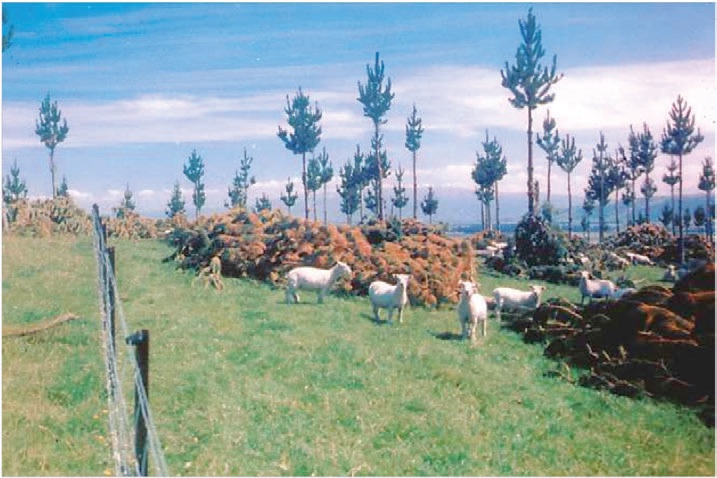 A range of improved pasture feed allowances of between one and five kilograms of dry matter per sheep per day was offered to young sheep in each tree stocking. Mean liveweight gain averaged over six 30-day periods at tree age 13 to 15 years, was 170, 155, 136 and 94 grams per sheep per day for open pasture, 50, 100, and 200 trees per hectare respectively. Liveweight gain increased with increased pasture allowance at all tree stockings.

Understorey sheep performance was satisfactory assuming between 1500 and 2000 kilograms of dry matter per hectare was available. This was achievable only under low stockings or before canopy closure was reached.

Seasonal effects were minor and extreme conditions rarely occurred which would affect livestock performance. The modification of the understorey microclimate is probably beneficial for livestock farming.

Which tree stocking is best?

Managers must choose final crop stockings of trees that best satisfy their requirements. There is no single solution that meets all objectives, and the optimum solution will depend on the individual decision-maker.

It can be seen that there is no single answer to the question of what is the best combination of trees and pasture. The objective of the Tikitere trials was to provide tools to help decision-makers to make their own judgements.

The research project at Tikitere produced an amazing amount of data. The overall finding would have to be that the combination of trees and pasture on the same land unit was not good for wood quality, pasture production or animal performance.