All from a shelter belt

The wildings, predominantly Corsican pine with a few radiata but no contorta, originate from a 1910 shelterbelt on Lake Coleridge Station, a kilometre to the north of Mt Barker. The first wildings appeared in the 1940s. Just on 20 years later a major spread took them up to another ten kilometres to the east, and the view now is of a pine forest on the mountain and plain, with scattered outliers on the hills further south. By the early 1990s the leaseholder had had enough and insisted that the most affected area, the forest of 380 hectares, be fenced and withdrawn from his lease. 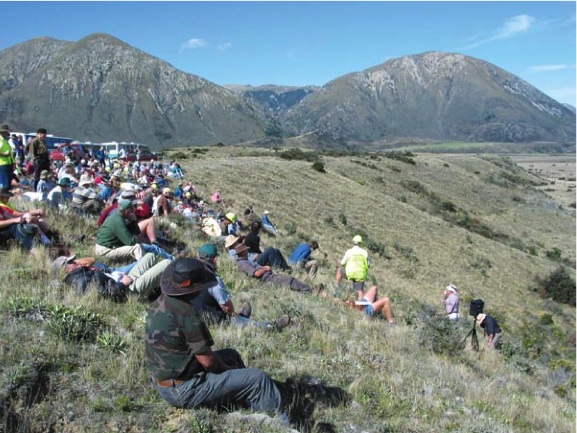 A year later a joint venture management agreement was signed between the University and the Mt Barker Forestry directors named above. Both have significant high country forestry experience, are expert in wilding pine matters and see the enterprise as a way of practising what they have for so long preached to others.

At the first stop where we could see all we were told us about the mechanics of the issue. Northern hemisphere conifers are vastly more successful colonisers of the high country than are native plants. Their seed is wind blown and on suitable sites seedlings quickly grow beyond control by browsing animals. The invasion starts with scattered individuals which, if not removed before seeding themselves, will scatter their own children tightly round them into groups which, given time, will coalesce into a forest. The seed does not last long in the ground, two or three years at most so it is not a gorse or broom problem.

The speed with which this happens varies with the species and Corsican pine takes 12 to 15 years. Much depends on the state of development of the land downwind. Grazing does not control unless associated with development such as top dressing and over-sowing. It is all about increased stocking and the competition of introduced grasses restricting germination.

So there is time. Nick preaches that you should know your species so that you know how long you have. Hit the first arrivals as soon as they become noticeable and come back a year or two later to get the ones you missed the first time. There is no need to scrabble about in the grass looking for seedlings. You will miss some anyway so just make another visit when you can see them.

From there we moved on to the joint venture area, another test of bus driving skills which were such a feature of this conference. The forest is a mixture of age classes and stem quality, with the oldest open grown first arrivals densely surrounded by younger generations. It is capable of yielding anything from rather rough sawlogs to the best formed post and pole material in every dimension.

The objectives of the venture are both production and conservation. Apart from the mountain slopes the bulk of the forest is of quite gentle topography. The production side at first consisted of one small harvest of one to two hectares annually but the logistics proved too expensive. Now three or four of the harvests, carried out by contract, are done together every three or four years. Each is then replanted with Douglas fir. A harvest yields $5,000 to $7,000 per hectare delivered to the mill. It should demand a quality premium, Corsican pine being the strength king of post material. Unfortunately this is not the case, perhaps because the supply is too small and infrequent.

Planting the next crop

The Douglas fir planting is of Tramway stock from Beaumont forest on the banks of the Clutha river, with excellent form and vigour, growing well at the beginning of a 45-year rotation in its sheltered clearings. The forest environment is not lost, but the ultimate future is still uncertain as Douglas fir is as vigorous a spreader at this altitude as Corsican pine. So will the wilding problem remain?

Control outside the boundary 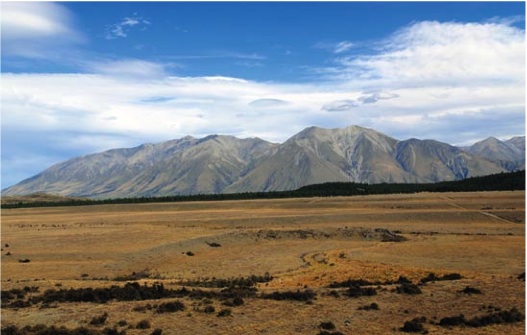 On the conservation side, wildings outside the boundary are removed and their reintroduction controlled by top dressing the strip along the fence to encourage forage and attract animals to eat it. There is also some boundary planting of species less susceptible to spread such as ponderosa pine and radiata which also assist by catching seed from within the forest. Within the block there are scattered tarns and regeneration close to them has been removed. The shelter, varied habitat and food sources attract birds both native and introduced.

One of the first field trips of the conference was to Hinewai on Banks Peninsula, where gorse and broom are being defeated by invading natives. The question was put that this might happen in due course at Mt Barker. Nick did not think it would. The difference between the two is seed source. At Hinewai it is abundant, but at Mt Barker absent. If there was to be any regeneration the seed sources would have to be planted. 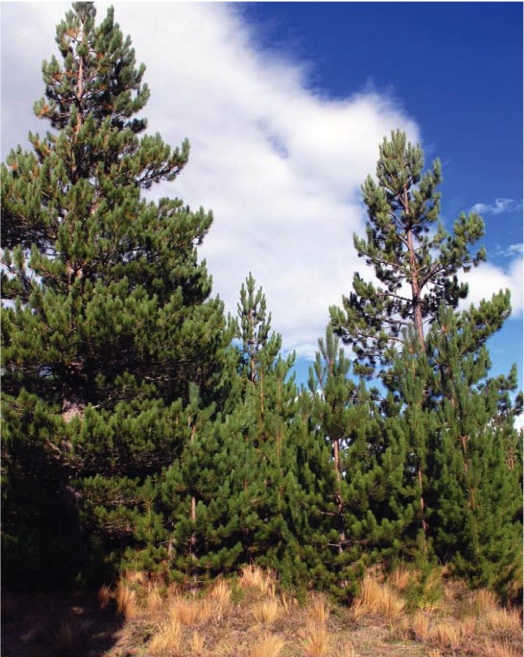 So the final question is ? Are wildings always a pest or can they be an opportunity as well? Certainly there is a problem if they include contorta, but otherwise this field trip would seem to indicate the latter. Both the directors have other jobs, but if they did not, would it not be a very pleasant and profitable job working up here for two or three months of each summer ?

Tony Tripp from Snowdon Station mentioned that every musterer always carries a pruning saw to deal to any wilding seen. Nick has suggested elsewhere that in ten to twelve years’ time retrieving the odd tree will be as normal as retrieving the odd sheep that gets through the fence. It will just be part of the farming year, something one just does. Perhaps as usual, the Tripps lead the way, but what of those land administrators who do not have musters?

This was an excellent end to a day full of initiative and interest, blessed too by perfect weather.