In March 2018 a team of continuous cover forestry enthusiasts embarked on a feasibility study. It was funded by the Sustainable Farming Fund and was to investigate the potential for a specific continuous cover forestry system – target diameter harvesting – in radiata pine woodlots in the lower North Island.Target diameter harvesting has been successfully used by John Wardle in radiata pine plantations at Woodside, North Canterbury.

The aim of this project was to investigate whether target diameter harvesting could work in radiata pine stands in other parts of New Zealand. The following is a brief summary of the findings.A more detailed article is planned for inclusion in the May 2019 Tree Grower.

We interviewed a number of people in the industry supply chain, including logging contractors, harvesting and marketing managers, log truck operators and timber buyers. The aim was to determine whether target diameter harvesting would be practically feasible in the lower North Island.

Conclusions from the study

Overall, the conclusions we took from the study were − 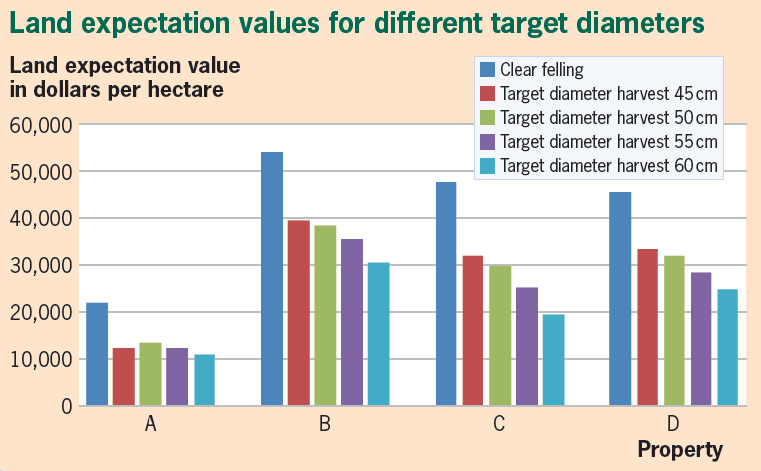 The second graph is an example of a model output. It shows the total recoverable volume per hectare over 20 years with the log grade result from a one-year-in- three target diameter harvest regime with a 55 cm target diameter. 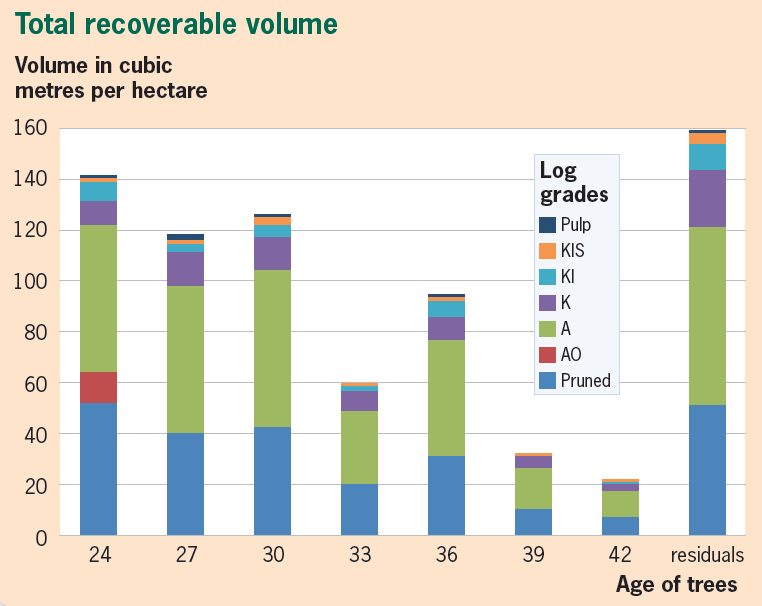 Some problems to solve

Our study was limited to ground-based harvesting. We concluded that the specialist skills and relatively small- scale machinery needed to undertake target diameter harvesting exist in the lower North Island, and that the ideal scenario would be for specialist crews to become established and develop a working circle of properties in a given area. The minimum working area needed to keep a crew of three people in work in perpetuity is estimated at 600 to 700 hectares at current harvesting rates.

Thank you to all those who contributed to the study, and to the funders – MPI Sustainable Farming Fund, Wellington and Wairarapa Branches of the NZFFA and Tinui Forest Park Ltd.

Target diameter harvesting – beyond the transition

The short paper on target diameter harvesting in February’s Tree Grower was supplemented by the excellent field day at Tinui Forest Park in the Wairarapa, where around 45 people turned up to hear the authors and researchers enlarge on their work. Several things not covered in the paper became clearer with the handouts and discussion, and this one I thought was worth recording.

Naturally the research was aimed at informing existing forest growers who had single age-class stands. All of the scenarios therefore assumed that someone who had planted, intending to clear fell later, might switch to continuous cover forestry. Clear fell, of course, removes big and small trees, whereas target diameter harvesting leaves small trees until they grow big enough to fell. Obviously, that takes time, income is deferred, and so target diameter harvesting appears less profitable. But this just models the transition and does not give the full picture. In steady state, a continuous cover forest would have mixed age classes, and a clear fell one would not. In that situation, what would the relative profitability look like?

In broad terms, under target diameter harvesting, a mixed age forest would operate like a normal forest − a forest with equal areas of each age class, with the oldest age class harvested each year. It would generate a steady income each year with a constant nett present value. The comparable clear fell forest would generate a rotational income. Its nett present value would follow an S curve, from negative immediately after harvest, when costs were imminent and revenue decades away, to high immediately before harvest when revenues were imminent. Clearly, until that S curve rose to cross the straight line of the alternative regime, the net present value of the clear fell forest would be lower than that of its target diameter harvest equivalent.

Viewed in this way, net present values are equivalent to expectation values as used in the research. One might argue the accuracy of my sketches, but the fact remains that based on discounted cash flows, in steady state a continuous cover forest would, at times, appear more profitable than an equivalent single age-class clear fell forest. The earlier Tree Grower article did not make that clear, and risked giving the wrong impression.

I understand where Howard is coming from. Yes, if comparing the two systems for a multi-age forest a target diameter harvesting or continuous cover system may prove more profitable than clear fell − I do not know. That is not the situation we are in, and I would argue that if we already had multi-age forests clear fell would not even get a look in regardless of economics – it would just not make sense to clear fell a multi-age class forest.

The situation we are in, and that is posing a potential problem for the industry, is that we have enormous areas of single age-class forests with a growing question mark over their suitability to clear fell. Therefore, the question is how does a clear fell and replant compare with a target diameter conversion to a mixed-age class forest. Or what is the economic sacrifice of converting mono-age class forests into continuous cover multi-aged systems.

Unfortunately, discounted cash flow analysis is the standard for assessing forest economic performance. There is cost, both actual and opportunity costs of the land, associated with a forest reaching maturity. To write off that cost when deciding at age 18 or 20 might make sense to some land owners, but when comparing economic performance between the two systems it cannot be ignored.

But if you have a choice at age 18 why choose target diameter harvesting, since it's obviously going to delay revenues?  You'd only go for it if you could not get a consent to clear fell, and in that situation there's only one option.  What's the point of comparing the economics of the two 'options'?  It's totally academic.