The second field trip of the conference was to Appleton’s special arboretum strangely named Pig Valley – 150 hectares of trees and farmland. At the first stop overlooking part of the property Robert Appleton briefly outlined some of the tree trials he had carried out. There was a lot to take in. On the top of the hill were various cypress clones as well as some Douglas-fir. There were also a few redwoods with a separate redwood trial on a ridge.

Robert explained that redwoods were drought prone and in this part of the world, each spring has a three-month drought from September to December, which causes stress for a lot of trees. Redwoods normally grow in high places but with roots in gravels which have water. He said we need to understand that we should work out the best places to grow them and to understand the geology and weather to avoid problems. This point, the right trees in the right place, was the subject of the first presentation during lunch. Simeon Smaill from Scion took the microphone.

The four ‘g’s of tree planting

The usual advice about tree planting was that to get the right result you needed to have the right trees in the right place managed the right way – the four ‘r’s. However, you also need to know what you want the trees you are planting to do for you. Are they for erosion control, carbon sequestration, riparian management, aesthetics or even just for timber? It may well be a combination of these or more of them.

Simeon explained that once you know what you want to do with your trees, you then have to decide what are the right species? A recent survey suggests that we are not good at determining what the right trees are to plant for the results we want. In addition, it is common to underestimate trees we are not familiar with.

Once you have the right trees, where can you put them? There can be a significant variation of performance over small distances. It is important to trying and understand this variability of climate, position, soil and many other characteristics of where the trees are planted. You also need the right management, how to make them do what you want and with the right fertiliser and disease management.

Now that forestry is in the spotlight, and a big planting programme being encouraged, it is vital that the results are good. Otherwise, forestry will lose its place as a good idea. Overseas this was the case after many trees were planted without appropriate knowledge. The end result was that many people thought forestry did not work, but it was because it was not carried out properly, not because it was a bad idea.

On that basis Simeon said that you need to aim for a good result. To get that good result you need good trees in a good place managed in a good way – the four ‘g’s. 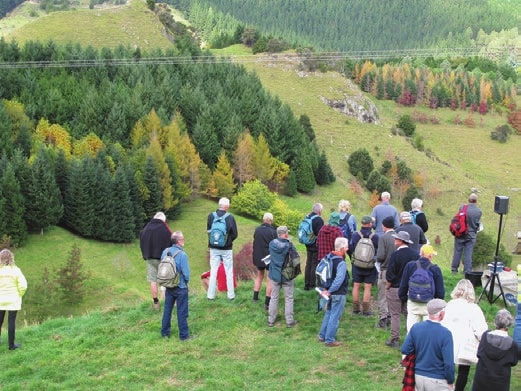 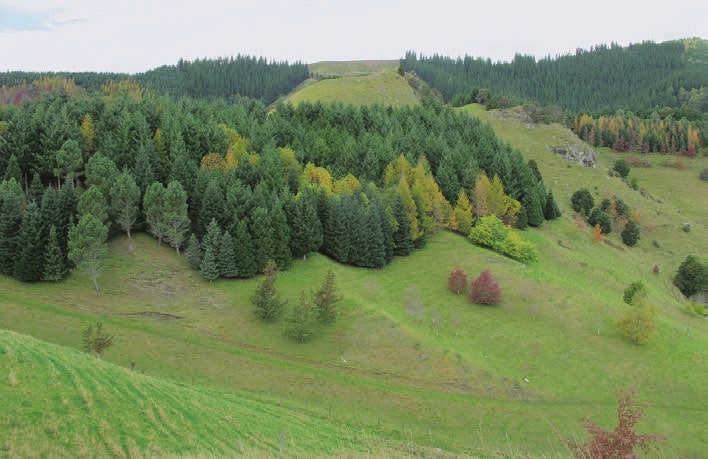 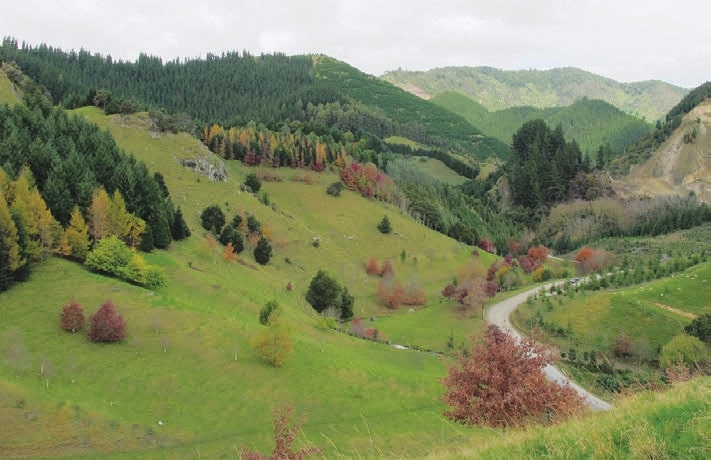 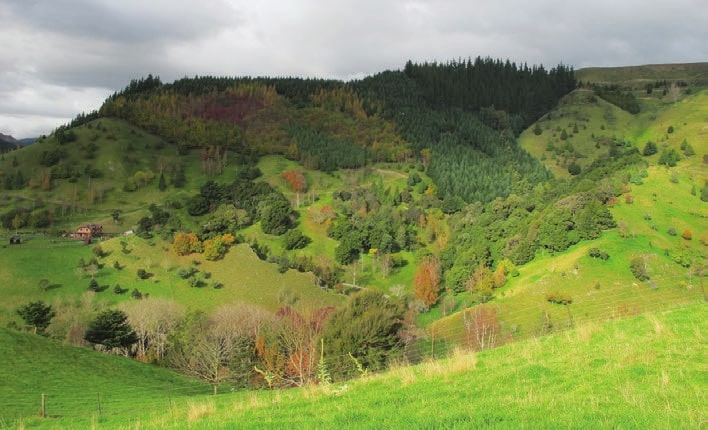 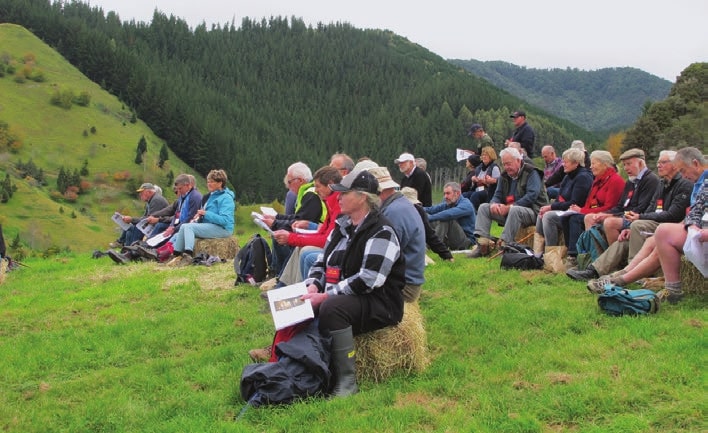 Cost to the soil of long-term harvesting

There was a further brief presentation from Scion about the effect on soil of harvesting techniques to determine what happens to the soil as a result of long-term harvesting over three or four rotations. To help find the answers a study was carried out looking at three different methods of harvesting −

As would be expected, just removing the tree stems at harvest had the least effect on the nitrogen in the soil and the remaining microbes. However, the effect of nutrient removal is site dependent, some places had fewer problems than others because some forests have developed to buffer disturbance, in other words reduce the effects.

The main message from this research was that problems caused by increased harvest intensity are likely to remain hidden until it is too late because of problems with the soil. Some forests in their third rotation may look good because improved genetics and better management and any soil problems are hidden. Even in fourth and fifth rotation better genetics and better management still means the trees can look fine, but in fact after fourth and fifth rotation you will be losing out on the soil quality.

Simeon explained that these were projections, not real. But he emphasised that if correct, a loss in soil quality as the rotations go on can be overlooked as management and genetics improves. The forests are often in trouble about five years before being noticed. Even though it is a hypothetical study, if you keep doing the same things over and over again with plantation trees, nutrient loss will continue. A balance between profit and environmental results will need to be found, perhaps with one slightly less intense rotation to let the land recover.

How Pig Valley got its trees

Robert Appleton explained a bit more about how he ended up with 150 hectares on which he has planted an amazing variety of trees. He had been on a trip to Canada and had seen botanical gardens planted in geographical zones. When he came back home he wanted land to do the same and also to create a seed orchard. At that time he was only 31 years old but was told he was already leaving it a bit late to plant trees. That was 26 years ago.

He found the land, which at the time covered 75 hectares, and started planting his trees. In some places the blackberry and hawthorn were so thick they just planted radiata pine, the block we could see from where we were sitting having lunch. On the rest of the land which had hawthorn and barberry, he began a weed control programme as planting progressed.

Robert started putting in trees from the east coast of the United States as they have spectacular autumn colours. He then continued with trees from the southern United States across to China. There was an amazing amount of detail and planning in his plantings which can only be appreciated by being there and having them described.

Planting trees anywhere he wanted, but with sheep grazing to keep the weeds down, required some thought and naturally a few failures. He has eventually settled on tree protection which mainly uses biodegradable long Tubex tree guards. However, sheep still used them as a scratching posts and damaged the seedling inside. To make the tree guards slightly flexible, and less damaging, he now adds a piece of novaflow drainage pipe on the bottom end, attached with soft wire which does not cut through when rubbed against. He has to make the stakes very tight to resist sheep rubbing

The stakes used the are not durable but they last the few years required. Where they do rot below ground, this part is cut off and they can be used again for smaller trees. For especially good protection he demonstrated the square mesh netting with two stakes. This is not a cheap option, but the mesh protection lasts a very long time and allows plenty of tree growth.

The final part of the day was a drone demonstration, or as we should call them unmanned aerial vehicles or UAVs. We saw the usual multi-rotor version as wells as a fixed wing one. The article on page 20 tells us some of the latest ways UAVs are being used in small-scale forestry, particularly with regard to biosecurity.

One of the biosecurity problems that UAVs can be used to look for is red needle cast. The final Scion presentation of the day gave us some background about red needle cast, one of the more recent diseases of radiata pine. Many of the needle diseases occur at the same time of the year, around September, but red needle cast can be identified from the distinctive green bands.

Red needle cast is a phytohpthera, a sort of fungus although it cannot be treated with a conventional fungicide. It can be quite a concern when your pine trees start to shed their needles. But if your trees get the disease it is not a tree death sentence although there will be a growth loss. This is usually around a

40 per cent loss in the first year, 15 per cent year in the second year but by the third year the tree should have fully recovered. Once trees have been affected, the disease does go away and it is very unlikely to return. Red needle cast also occurs on Douglas-fr but in a different way, the needles drop when they are green.

The question was asked − what treatment is there if your trees get red needle cast? Applying copper is the most effective treatment at various levels. In addition, adding more nutrients to make the trees healthier will also help.