Rebuilding after the Onamalutu fire earlier this year

Marlborough forester Ket Bradshaw lost large sections of her Nikau Forest in a fire in February 2015. Here is her experience and the lessons learned in the aftermath.

A fire developed at a skid site in Nelson Forests’ Onamalutu forest. Over night a strong south-westerly wind and a relative humidity of 20 per cent caused the fire to spot burn and leap one to two kilometres, rapidly spreading through the dry trees.

What does every absentee forest owner dread? A major fire when you are not around. What I had hoped for was that the rural fire authority or my neighbours would give me a call, but this did not happen. During the early hours of the morning the police visited all occupied houses in Lamberts Road and recommended that people evacuate. If it had not been for Vern Harris and our neighbour, Ron McLean, who could see the pall of smoke from the other side of the Wairau Valley, I am not sure if I would have been notified.

‘Hi Ket, I have just been advised of major fire in Bookers/Lamberts area. Will advise further when or if I have more information. Vern’

‘Thanks Vern. Talked to Stephen, he has evacuated all his vehicles and has his tractor at our bridge. I am in Wellington and flying over this morning. I asked him to get my special diary books out of my hut. Fingers crossed. Ket’

As I flew across from Wellington towards the smoke, I was sure the whole forest was gone. My friend Johnnie Oswald picked me up from the airport and we drove up Lamberts Road straight to my forest hut. Even though the fire was heading towards this part, and was the first area available to contain the northern flank of the 600 hectare fire, the road was still open. From his high country fire experience, Johnnie knew that the major hazard for getting out was the barley field at the beginning of Lamberts road opposite a pine forest.

While Johnnie dampened the grass behind the hut, I hurriedly put my special diary books in his truck, the weed-eater, a few other bits and pieces and then the large aerial photograph of my Nikau Forest.

As we drove away I said a second goodbye to my hut. It is really a she-shed with lots of things from my past. A mixture of accommodation and tools, lined with the family and children’s paintings, tapa cloths, the tadpole catcher for the pond and a beautiful nikau carving by Geoff Brann.

I tried to return to the hut with a sprinkler but it was no go. Flax in the wetland rapidly was exploding into flames and the eucalypts were alight with fire quickly going into the crowns. The glowing ash falling from the sky caused spot burning and flames. I drove out, and as no road block was in place, insisted that rubber-neckers driving up Lamberts road should turn back.

I returned the sprinkler. Smoke was a significant hazard drifting over State Highway 6 with people and fire engines milling around. I gave my Nikau Forest map to fire fighters so they could see the vegetation boundaries on a large scale rather than the outdated topographic map they were using. My logging track and skid site about a kilometre from the hut was to become the northern perimeter of the fire.

I went up Lamberts Road with a fire truck while neighbours screamed and swore at the firemen to save their houses. Firemen seemed in no hurry and continued talking but finally went to the houses. Fire came very close but all the houses were saved by firemen working together with helicopters. The fire came within a metre of my hut.

I took up a vantage point by high voltage cables on ridge between Lamberts Road and State Highway 6.

The wind changed to northerly, reversing the direction of the fire which started to burn uphill through the already burnt forest. The smoke column ‘stood up’ allowing helicopters with monsoon buckets to put the fire out using buckets filled from the Wairau River, water trucks and nearby dams.

I was interviewed by Jim Mora on Radio New Zealand. Rural fire fighters wanted to play down talk about the suspicious nature of the fire to discourage further fire lighting.

Lamberts Road was closed and Marlborough-Kaikoura Rural Fire Authority were in control of the land.We were allowed back up Lamberts Road to survey damage. The hut was fine and the main fire was out although helicopters were still putting out flare-ups. We used wet sacks and mattock to put out fires among the cypress and Douglas fir until dark.

The fire crew watched the fire overnight. The crew borrowed my wet sacks to put out fires burning in trunks of macrocarpa and lusitanica 100 metres from my access road.

Andrew Johns convinced me I can do no more so I left.

At first light I went back to the forest to put out hotspots using a backpack sprayer with water, wet sack and mattock. The problem areas were the cypresses, Douglas fir and eucalypts all within the perimeter of the fire.

I returned with Rob, Johnnie and Jenny to concentrate on these areas. We were grateful to have the hut as the centre of operations, although we needed more water as the pipes were burnt.

The first community meeting was held with Marlborough Kaikoura Rural Fire Authority and Nelson Forests to brief residents at Onamalutu Domain. There was a concern that the fire may spread into the many lifestyle blocks in the Onamalutu valley.

Subsequent meetings provided more detail to property owners affected by the fire and there was a real sense of community. Some whispered grumblings about how the fire was fought and that their properties were sitting ducks. No efforts were made to contain fire in the paddocks between the forest boundary and Lamberts Road. Heavy machinery which was available could have been used to protect an uninsured barley field. Fire chasers were not used in my forest until Saturday.

My neighbours Stephen and Cathy Leslie did not evacuate and saved all their grassland by beating out fires with wet sacks and with assistance from the helicopters. People with wet sacks can make a big difference in a fire and it was the way fires used to be fought. Now, because of health and safety concerns, other systems are used to fight fires during daylight hours.

My cypress and older Douglas fir were still burning. As these were within the perimeter of the fire they were not a priority for the ground fire crews. The priority was to secure the perimeter. By Sunday, four days after the fire started, fire crews concentrated on hots spots detected by infrared photography. The head of the Canvastown firefighting crew on Saturday confirmed that if I wanted to put out any fires within my forest, I needed to organise people to do this. From Sunday 8 February to Tuesday 24 February the patrols continued.

Fire crews roll about 800 metres of hose from the fire chaser and finally put out the fire on the boundary between my Douglas fir planted in 1986 and the old man pines higher up the ridge. I continued to patrol the forest each afternoon when fires were most likely to break out.

The fire burned for 12 days, the total costs of suppression was $1.3 million of which the aircraft costs were 33 per cent. Apart from the physical losses from the fire I have been through an emotional roller coaster. This includes frustration at the lack of communication and invasion of privacy, as well as elation, grief, confusion, gratitude and powerlessness.

‘Hi Denis thanks for all your efforts. What is the status of the fire and are you finding anymore hotspots? My (insurance) loss adjustor is visiting me on Thursday and John Horton (Nelson Forests) had given me an aerial photo from last week which will help work out the damage to the various species. Ket ‘

‘Hi Ket, last hot spot found on Friday 20, infra red by chopper picked up nothing this morning. Still monitoring and won’t be officially declared out until significant rain. Sing out if there’s anything we can do. Regards Denis’ [Parsons, Nelson Forests]

The insurance loss adjuster and his forestry consultant assessed that 25 hectares of the 30 hectares had been damaged by fire. The youngest plantings were completely written off. The majority of the mid-rotation cypress and Douglas fir were fire damaged. I will wait to see how they are growing in the spring and thin out the obviously damaged trees.

There was the question of what to do with the older burnt radiata, lusitanica and eucalypts. There was a strong smell of cooked sugars indicating high radiant heat. What damage to the wood would there be? When would the wood beetle arrive? Would the trees recover if I did nothing?

In the end I salvage logged 12.7 hectares. This was a big change of plan because previously I have harvested around one hectare a year. Because there was damage to the bark rather than the wood, the salvage value of the radiata was greater than my insured value.

At the time of writing the cause of the fire is still unexplained. Nelson Forests have called a meeting for early July to discuss the findings of the fire expert’s report. This has implications for liability and who pays for the fire suppression costs.

In addition, also at the time this article is being written, there has not been any insurance payout – we are still working this out. One unexpected discovery is that my insurance requires me to replant within 12 months with the same species. That means planting this winter. There will be thick regeneration, probably thousands of stems per hectare this spring. Usually the regeneration is sprayed in spring and the area replanted the following year. Discussions are continuing with the insurance loss adjuster and the insurance agent. 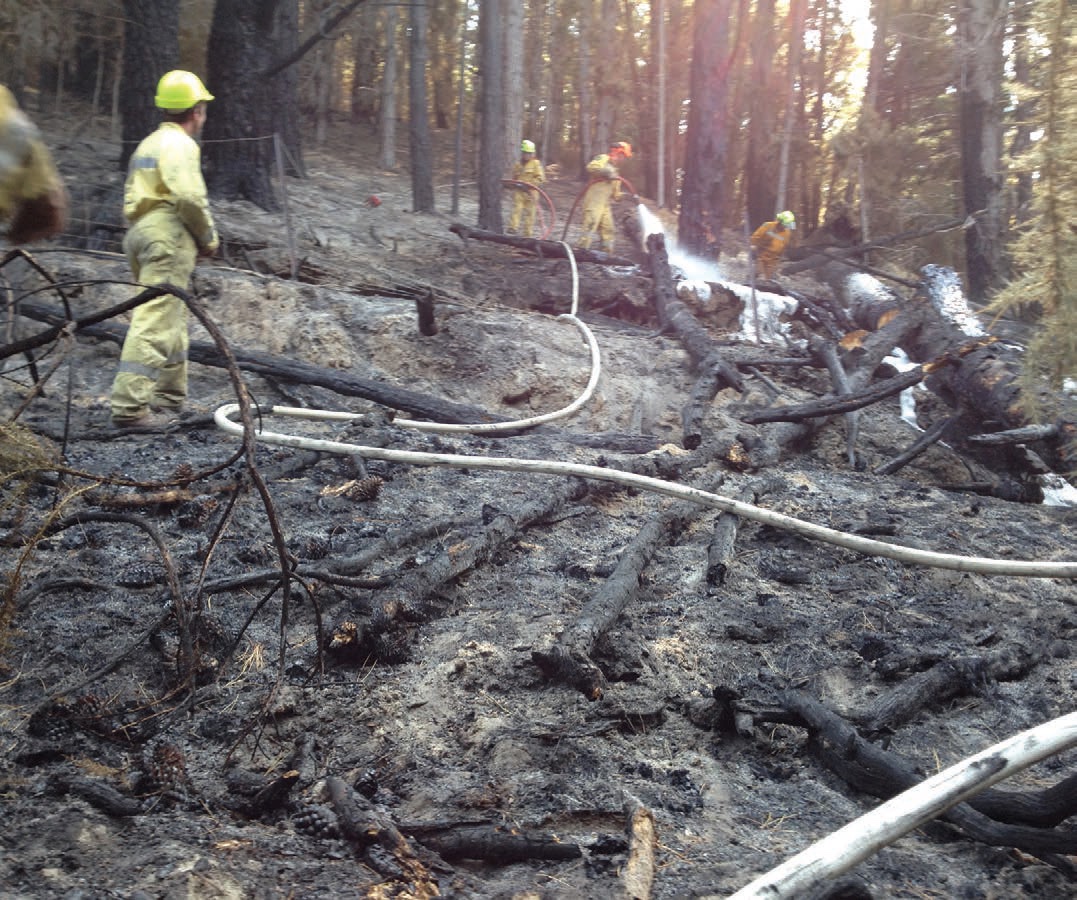 Rural fire fighting insurance is a must. Tree insurance is most important for alternative species, with most of the salvaged logs sold for firewood, and younger stands. For the older radiata stands the salvage value was greater than the insured value.

Logging after the fire has affected neighbours. Areas that would have been logged over a number of years have been logged within a few months, with noise from logging machinery starting operations before 6.00 am, logging trucks and damage to roads on right of ways and compressed timescales. Even though neighbours have bought lifestyle blocks in a wooded landscape, logging is unwelcome.

In addition are the following points:

Ket Bradshaw is a forest owner and a member of the NZFFA. 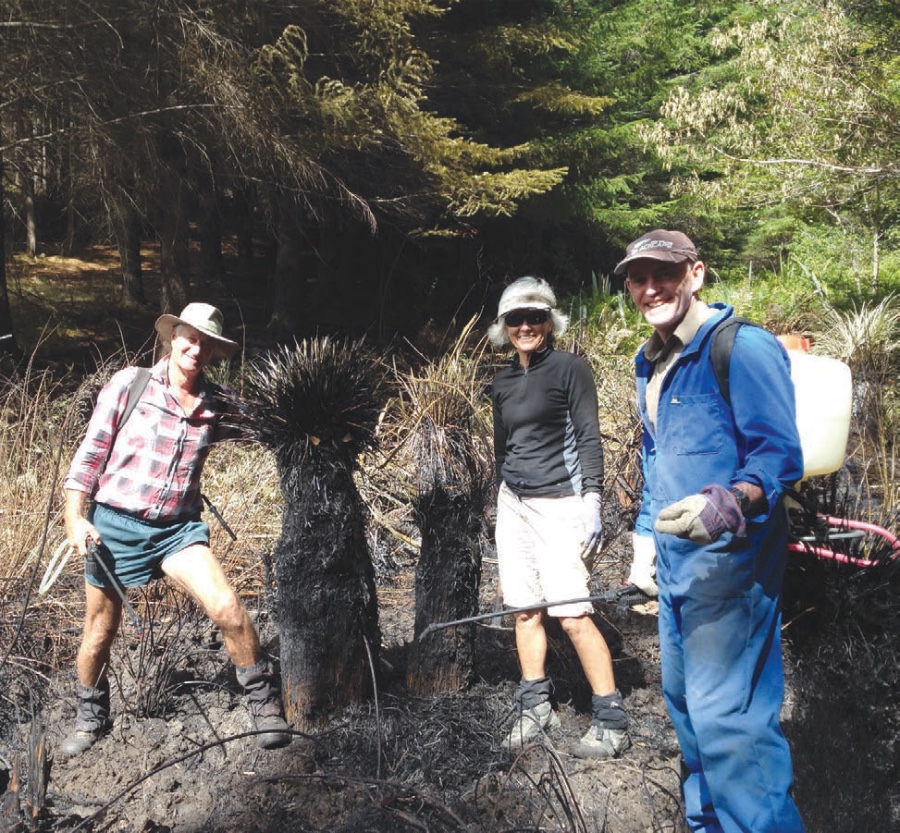 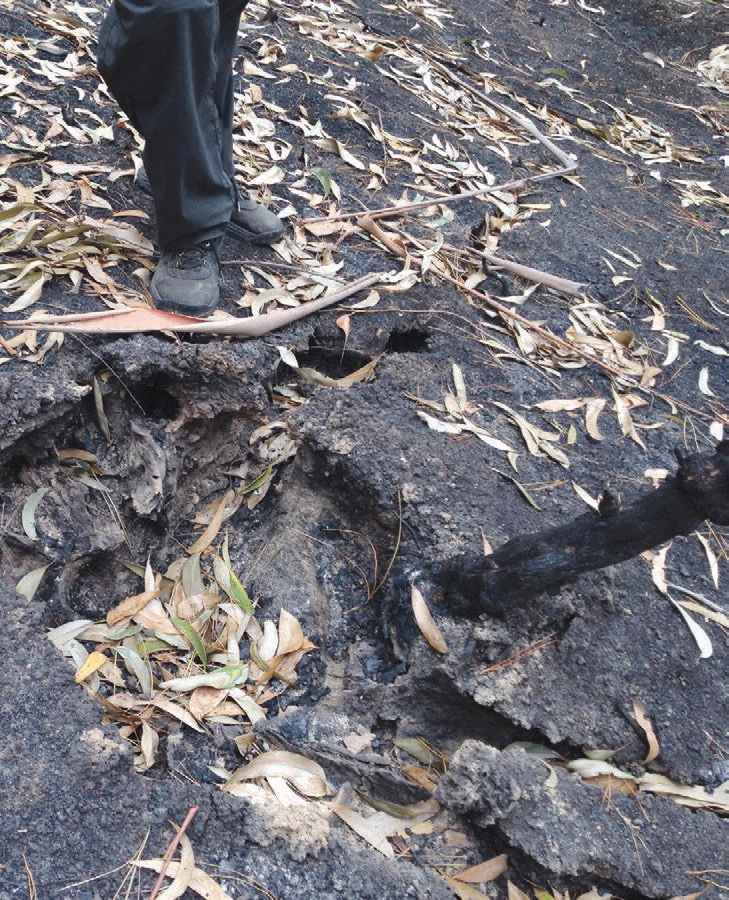