Miraka farm is nestled against the banks of the Mangatutu river south-east of Te Awamutu. It is home to 70 cows, 15 ducks, three dogs, umpteen turkeys as well as the owners, Graham and Tess Smith.

The interesting part of this farming operation is the mix of income streams − dairy, tourism and farm stays, a gardening maintenance business and a niche forestry operation which starts in a small nursery, grows the trees to harvestable size and then saws and markets them. All this takes place on a 37 hectare farm adjacent to a locally recognised trout stream. The uniqueness of this business is that it has a multi-use timber and fodder tree system along all fence lines using a species which many foresters would regard as an ornamental anomaly, namely paulownia.

The dairy operation of 70 kiwi cross cows, provides a stable income to the owners without compromising the surrounding environment. The cows are all grass wintered on the farm as are the replacement heifers. A small amount of maize silage, hay and supplements are bought in for feeding during the summer and autumn to maintain body condition.

Calving starts in mid-July and is finished within eight weeks without having to use any inductions, a point of difference which Graham is particularly proud of. He puts it down to having the appropriate genetics in his cows and having a matched feed supply. This is all achieved with an Overseer predicted nitrogen loss of 13 kilograms of nitrogen per hectare per year from the 28 hectare milking platform, with the last season’s production of 1,092 kilograms of milk solids a hectare.

Paulownia was chosen by Graham when the paulownia timber company was promoting the species in the early 1990s and has become the mainstay of his planting in the dairy unit. The timber is extremely light and relatively strong, the leaves are palatable for livestock and safe to eat and it is deciduous, which minimises winter shading in the frosty valley bottom. The tree stock is grown in Graham’s nursery from a coppicing rootstock, with a target of having a six metre straight defect-free rooted pole which will produce clear boards when sawn.

If a coppice sprout develops a wobble, or the leader breaks out, then that coppice shoot is cut off and allowed to grow again the next year until the perfect stem is achieved. The trees line the raceways and the major paddock boundaries, and have also been used recently to subdivide paddocks into long thin feeding breaks.

The spacing of the feeding breaks align with the minimum requirement for registration with the Emissions Trading Scheme and to achieve the required 60 per cent canopy cover, the rows are 15 metres apart with tree spacing within the rows at five metres. Grazing is right to the trunk with the appropriate positioning of electric fence wires. This is the unique point about the property, the multi-layered approach to harvesting sunlight. One is the conventional grass and cows and the other completely unconventional paulownia tree belts for timber, shade, shelter, fodder and carbon harvesting. Added to this Graham has taken a leap of faith and is sawing and marketing the timber of this boutique species. 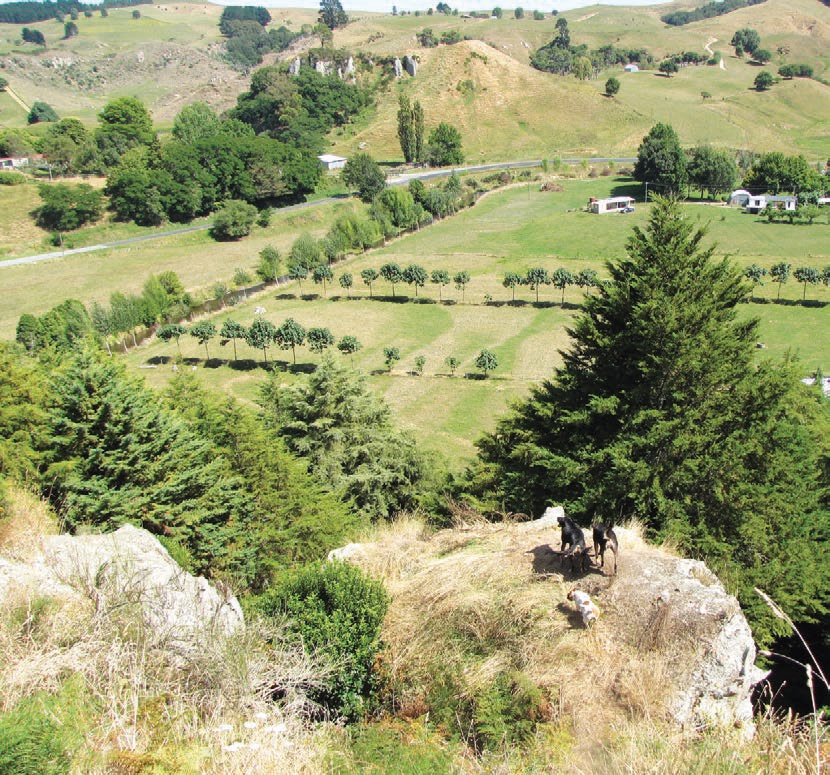 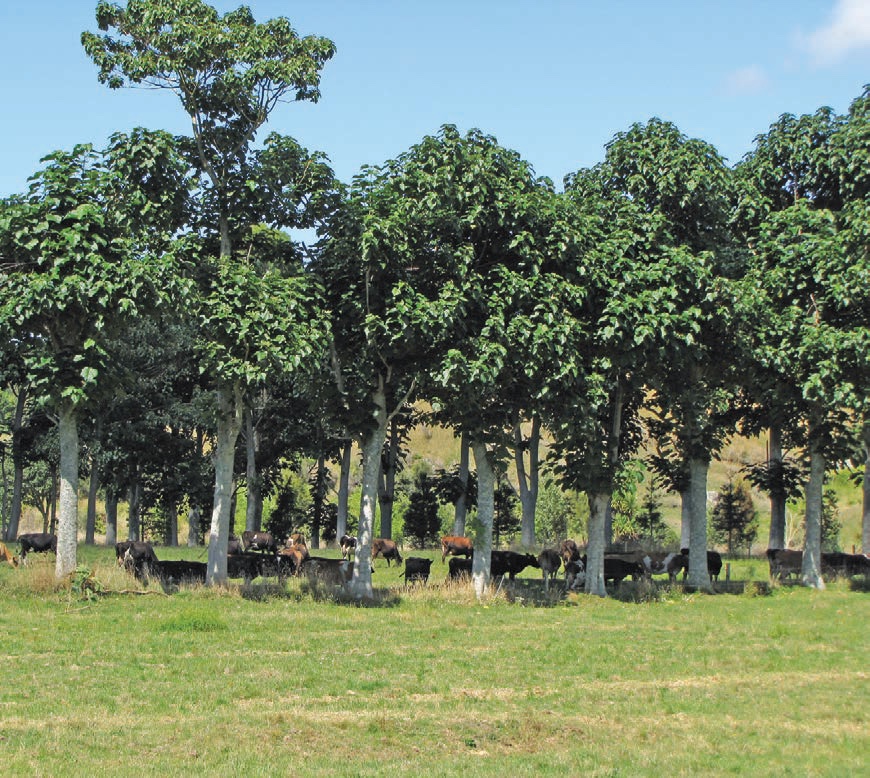 The middle of the farm is dominated by a large ignimbrite outcrop which juts 50 metres above the valley floor. This is partly clothed with Cupressus lusitanica on the western aspect and on the southern face an area of native planting surrounds a QE II covenanted portion of the rock formation. A replanted radiata pine cut-over graces the eastern flanks of this rock buttress. 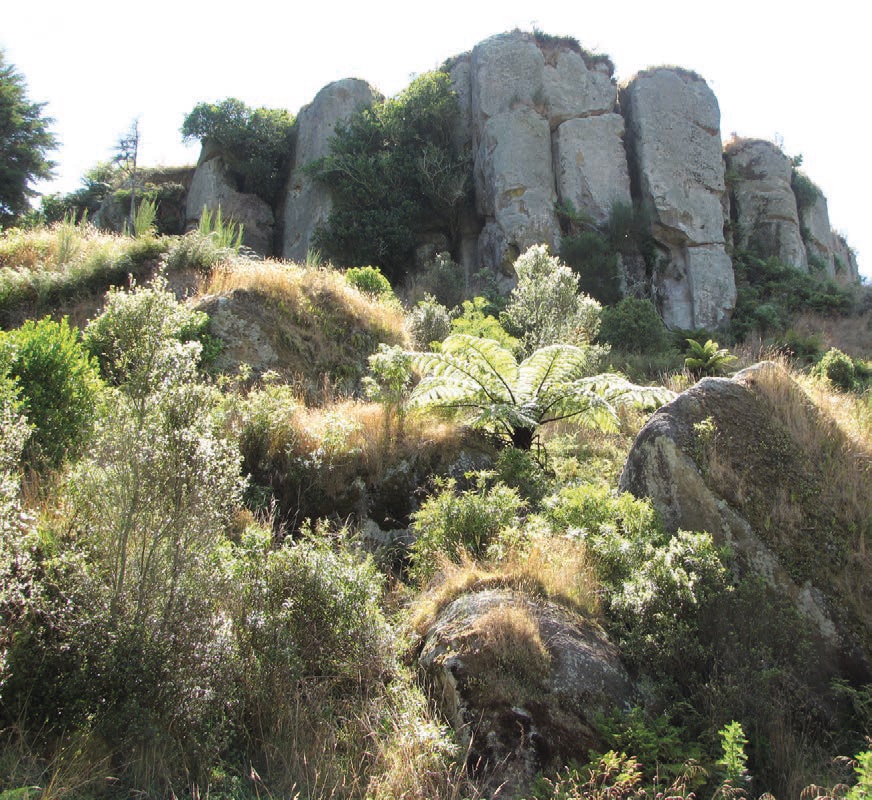 On an adjacent hill slope on the northern boundary of the property is a second recently harvested pine site. This is now clothed with a multi-species stringybark eucalypt trial planted in 2013. It was set up to test the growth and survival of a number of New Zealand sourced seed lines of the species involved.

Adjacent to this area is the jewel in the crown of the property water wise − an elevated natural spring reticulated to the majority of the farm using gravity. It was previously within another of the pine woodlots, but after harvest the decision was made to exclude the area adjacent to the spring from production forestry, and instead plant a mix of native species.

The riparian areas of the farm are all fenced and planted for water protection and erosion control because the alluvial and volcanic soils of the valley floor are easily eroded. As previously noted the Mangatutu river has a very healthy trout population. This adds another layer of income for the property via rental of the fisherman’s cottage accommodation unit, something that owners are happy to promote.

Miraka farm was a local Balance Farm Environment award winner in 2013 for water care, which goes to show that intensive farming and a healthy natural environment can co-exist, it just takes a bit of forethought and passion. Graham and Tess are worthy winners of this year’s award. 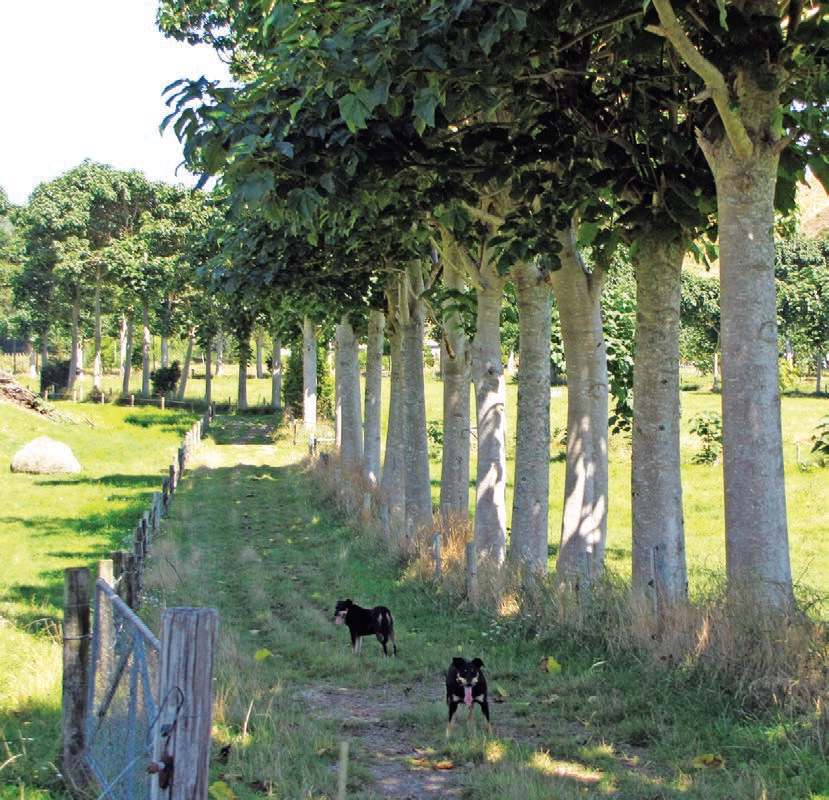