Sixteen years of passion and tree planting a formidable task

The first bus full of conference attendees tried to take a short cut approaching John Purey- Cust’s property, with near dire consequences. But this in no way simulates what John has done since he took over his land sixteen years ago, at the end of 1994.

John has the passion that so many farm foresters seem to show. He won the Husqvarna South Island Farm Forester of the year award last year and belongs to the organisation Men of the Trees started by the visionary Richard St. Barbe Baker following a career in forestry consultancy. For those who know John there is no need to mention the entertaining dry wit and the large store of botanical knowledge shown during the conference evening procedures. So it was with eager anticipation that we all went to visit his property.

The first impressions were of walking across bare farmland to what appeared to be a wooded enclave and seeing his cottage with a backdrop of healthy eucalypts.The well-tended raised vegetable garden boxes and huge piles of stacked firewood signalled that this was going to be an interesting stop.

When buying this land to plant trees John had set himself a formidable task. The soil is very heavy loess which is saturated during the winter, and because of general compaction due to previous farming practices there is next to no natural drainage. Natural fertility means that new plantings have had to contend with formidable grass and weed competition along with wind, hail and the recurring frosts prevalent in the area.

People here talk of the severe frost of 1996 in hushed tones, in much the same vein as East Coast people talk of Cyclone Bola. With this frost, plumbers could not be had for nearly four years, such was the damage incurred. 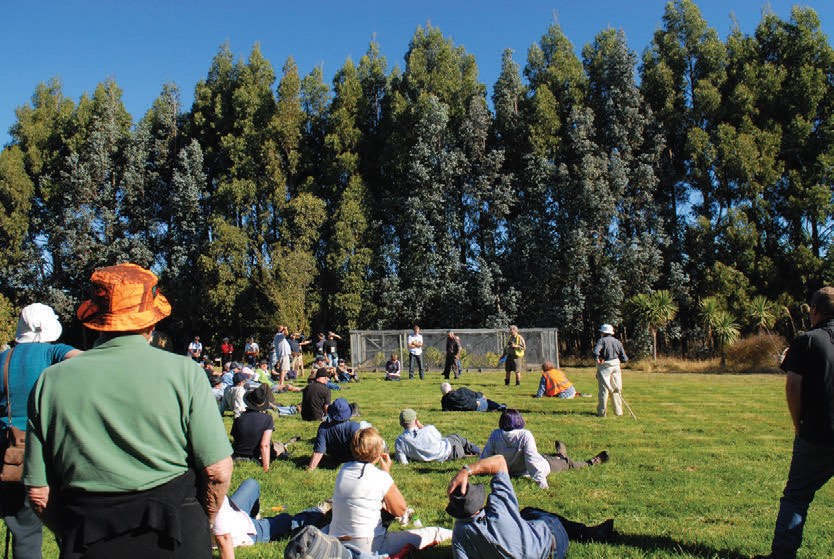 The soil has very much influenced what John has planted, along with the idea of having no pines or Douglas fir − been there, done that. He was particularly attached to the idea of growing New Zealand beeches and other Nothofagus species. This has been partially successful, but not without tribulations such as the weed competition, especially buttercups. In addition were incorrect release sprays and due, to the lack of seedling supply at the time, the quality of the plants that he did get. He also discovered beeches are very slow growing. These setbacks did not dull John’s enthusiasm for planting native species which are slowly becoming a source of beauty and satisfaction.

After the introductory welcome, John showed us some macrocarpa. He found out they did not like the heavy soil, the frosts and the hail. Canker is predominant and the trees have been pruned, canker or not. As can be expected this generated some discussion. Where some of the macrocarpa have succumbed to canker he has inter-planted with lusitanica, but John was dismissive and said that the magpies were doing better.

Eucalypts were growing well with some impressive trees and some with dubious genetics. When asked what species they were, eucalyptus expert Graham Milligan was seen to scratch his head. However Eucalyptus cordata is giving John immense pleasure by bringing in bellbirds and tui, as well as E. camphora with its exquisite scent. 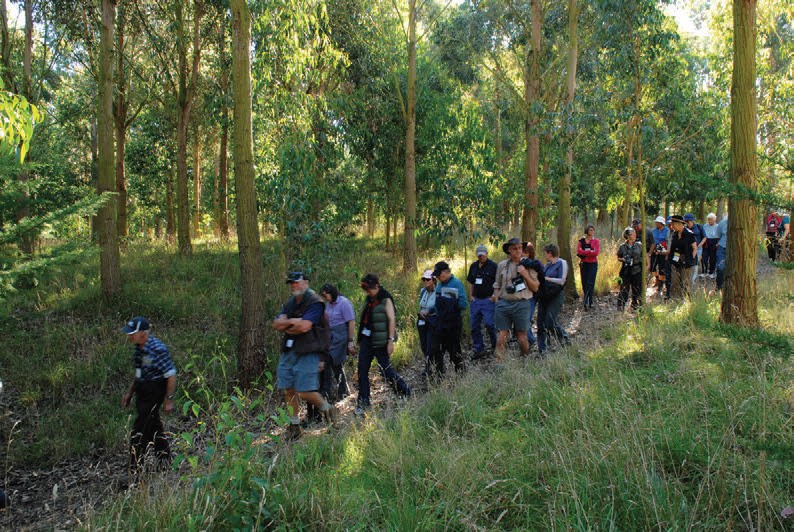 After walking into a stand of magnificent 21 metre high, 13-year-old E. regnans that were surrounded by an assortment of E. obliqua and E.fastigata and with blackwood, Acacia melanoxylon, planted in some of the gaps, there was intense discussion of ideas.

For the blackwoods, as so many of us at some time have asked, was what to do with them. Should they be kept or sacrificed, in this case for the bigger eucalypts that have influenced them to grow straight and are magnificent trees in their own right.

Coppicing E. regnans was a question raised. Is it a good thing or as suggested just a pain in the rear end? Does coppice growth inherit the faults of that parent tree? John, unlike some participants, commented that he likes to see the coppices growing, and where there are spaces, why not plant shade tolerant tree species. He pointed out that coppicing results in a continuous canopy.

Most people agreed that the stand needed thinning and which again caused a raft of discussions.They ranged from dropping to waste, to firewood which John is doing well out of, or to milling the small logs.

After the eucalypts, we walked through tranquil Androscoggin poplars all spaced and pruned, creating a visual feast. We asked ourselves why were these trees not included when selecting for mass conservation control. These are rust resistant and in their own right, very beautiful with large leaves and luminous pale trunks.

John told us they have a divine scent in spring and by walking through them we were all forced to admire their large roots. For John, and I am sure for most who were there, walking through this stand made all the initial tribulations of planting seem worthwhile. Again there were a lot of ideas about what to do with the trees eventually − millions of matches was one suggestion.

Following the poplars, we passed a wetland area, complete with a pond that has been attractively planted with flaxes, indigenous shrubs and rushes. Along with the stand of oak trees alongside this provides an eye-catching and rich environment for bird life. Further round, we came to a large area of indigenous planting including olearia and pittosporum − a farm forester planting non-forest trees?

An assortment of beeches has been planted, black, silver, red and even Chilean, which is doing well. As a forestry tree, John stresses that form pruning the Chilean beech is important. John is pleased with his silver beech which has good growth rates, but red beech initiated a bit of a debate. The difficulty of planting in heavy soil combined with dairy farming type grass growth came to the fore again with this species. It was pointed out that lack of mycorrhizal fungi could also be a problem.

As John, along with most farm foresters has timber in mind, there was quite a bit of discussion on the merits of pruning beech. All thought it was important to do, but how to do it was debatable.

We passed some well mannered beehives and got together on the wonderful grassy slope in front of John’s cottage and bordering a good native garden. We had another round of questions followed by thanks for such an inspiring visit. This was a property where we had witnessed a lot of passion, thought, mistakes and victories on what had been bare land, and had been made into an environmental jewel.

It made me think about the value of going to conference. How fantastic are the opportunities to visit and view the inspiring work done by others such as John Purey-Cust, to listen to other experts and debate the reasons for choice of species, the type of silviculture decided upon and the possible end uses.

You could never have questions answered so swiftly or the array of choices made plain as quickly just by reading books or checking the internet. Several answers can be correct and much is still experimental, but you can get the confidence to return home knowing more about the right thing to do or plant, or feeling happy that you have done the right thing with your forest and feeling good about trees. Farm forestry is a stimulating and challenging activity.