There is probably no other member of the NZFFA as well known to our membership as Graham Milligan – his booming voice, bushy beard and bare knees make him instantly recognisable. Graham and Heather’s passion for trees, and especially eucalypts, is equally self-evident.

Our visit was on the last day of the conference and the wonderful weather was just starting to break, with the north-west winds for which the area is famous being evident.

The Milligans have more than one property, but our visit was confined to the home block of 139 hectares, adjacent to the Oreti River. Those of us lucky enough to be in the same bus as Graham discussed the hill block as we drove out to Dipton. We could just see in the distance the Douglas fir planted for seed production.

Sadly we missed Heather’s lovely smile and we hope that she has now recovered fully. Simon, their son, works full time in the business and was responsible for photographs of the field day visits shown during the evenings at the hotel dinners.

Upon arrival we were greeted by Graham’s dog, clad in a bright orange safety vest converted to a dog coat. The cold wind had us all digging out our own coats or another layer of clothing. Graham was very proud of the eucalypts here, which had been thinned to a wide spacing of about 10 metres by 10 metres to give good grazing. He pointed out, in his own inimitable style, that you are allowed 70 per cent of no trees and still qualify for Emissions Trading Scheme credits as there is more than 30 per cent canopy.

The eucalypts Eucalyptus nitens were more difficult to prune as they produce a lot of large branches at this spacing, but E. regnans, with its light branching, can be grown at wide spacing without the heavy branching problems. Compared to poplar, they do very well, and carry more pasture under them than pine.

The largest trees, E. regnans, were 36.7 metres, or almost 120 feet in height, with a diameter at breast height of 605 cm. The value for firewood in the Southland region would be approximately $12,000 a hectare, although we were all were rather sad to think that the majestic trees would meet such a mundane end. Graham’s affection for the trees made it evident that such a fate would probably not happen during his lifetime.

Ian Nicholas spoke about the bio-energy potential of eucalypts and other tree species. Once the effluent or sewerage has been absorbed by the growing trees, the resulting fibre needs to be removed from the land so that the trees continue to grow vigorously, the stage when maximum use of the waste occurs. Bio-energy production can be viable on marginal hill country, where the sloping and less productive sites give tree health, growth and longevity. He ranked the most desirable species as radiata first, as it produces the most wood, Douglas fir was second equal with E. nitens and third were E. regnans and E. fastigata.

He also made the point that historically firewood is not profitable, even with coppicing, and that Graham’s statistics were not the usual result. E. regnans have a lot a clear wood above the pruned butt, there can be two to three metres between branches, making it a high-yielding and very valuable timber. A lot of seed is sold from these trees and they have much more frost-hardiness than the norm for the species.

There was a lively discussion which followed with a number of questions put to Graham. In answer to what was the sale potential he said that local sawmills pay $35 a cubic metre for standing timber, although you may have to wait for payment. What about pest bugs in E.regnans? Locally there are none, the trees are in perfect health, but the ground is free draining, although a bit damp. In warm places, where there could be leaf spot, E. fastigata is a better option.

What about the end use of the timber? E. nitens are grown extensively in Southland for production of woodchip, but Graham’s trees have yielded pit props through to appearance grade timber. His E. regnans is a high end timber, used in panelling, furniture and framing. Neither is ground durable, but the wood is very strong.

Finally what about processing – is collapse and internal checking a problem? Graham said that there is a wide range between trees and it can be a problem, but good drying is the solution. Sawmillers have to move their thinking away from radiata, as sawing and processing is critical when using eucalypts.

Graham’s dog led us through the various plantings to where Graham’s son Andrew, a trained arborist, was up a tree ready to demonstrate how the seed gathering from eucalypts is done. After some trial and error, Graham had found that by removing only the leafy end of the branches, they were able to come back to the tree a few years later and get another seed crop.

Andrew then started up his chain saw and dropped the leafy tips, which had this year’s flowers and last year’s seed pods on them, into a wool pack below. Andrew abseiled up and down the very large tree with stunning agility, referred to by Angus Gordon later as spider monkey.

The E. nitens tree was over 35 metres tall, and Andrew’s main support rope was suspended from about 30 metres up. Andrew has competed in the South Island arborist competitions and last year gained third place, this despite undergoing a spinal tumour operation 30 months ago. We watched the skilled demonstration with real appreciation, but I do not think any of us will try it.

Back at the home base, the leafy harvest will be put on to netting gates in a plastic tunnel house where the seed pods will open and the seeds fall out. To give a consistency of eventual crop, single tree selections are sold. Any seed under 85 mm is extracted, with only the larger seed sold. Seed keeps for over 20 years and gains potency over the first five years, stored at room temperature.

The yield is an average three kilograms a tree but this drops to between 400 gm and one kilogram of seed after cleaning, which is done by sieving and air cleaning. Subsequent germination is above 95 per cent and there can be up to 1.3 million seeds in a kilogram. Purity of variety is maintained by the spacing between tree seed lots, but some varieties will cross-pollinate more than others. A test germination is undertaken if purity is uncertain.

Both Ian Nichols and Paul Millen were critical of the single tree seed gathering, as this can lead to a narrowing of the genetic pool of trees. Graham explained that, if specifically requested, a mixed pool of trees would be used, but for consistency of timber production which is his main market, the single tree selection is preferred.

On the way to the next stop Graham pointed out a small stand of somewhat uninspiring trees and explained that they had great significance as because natural population in Tasmania is near extinction. These trees were an ark, a potential seed source for the continuation of the species.

We gathered on a flood bank to view a long lot of small trees with very small blue circular leaves – see the front cover of May Tree Grower magazine. They are known as baby blue, the powder gum E. pulverulenta. Until just a few years ago the Milligan family harvested the foliage from these trees and other selected eucalypt varieties and sold them throughout New Zealand as decorative foliage for floristry. They provided a useful cash flow – $18,000 a year in the peak year. Now the seeds are collected and exported world wide.

The seed selling business today is thriving and this is directly attributable to Heather and Graham’s love of trees, especially eucalypts.This has been coupled with hard work as was evident to all who attended the field day. No-one was surprised to hear that Graham spends as much time discussing which is the better species for particular climatic conditions, which variety will give feed for birds and bees, and what tree to grow for a particular purpose, as he does in the mechanics of the actual sale process. It was an informative, engrossing, and most memorable field day. 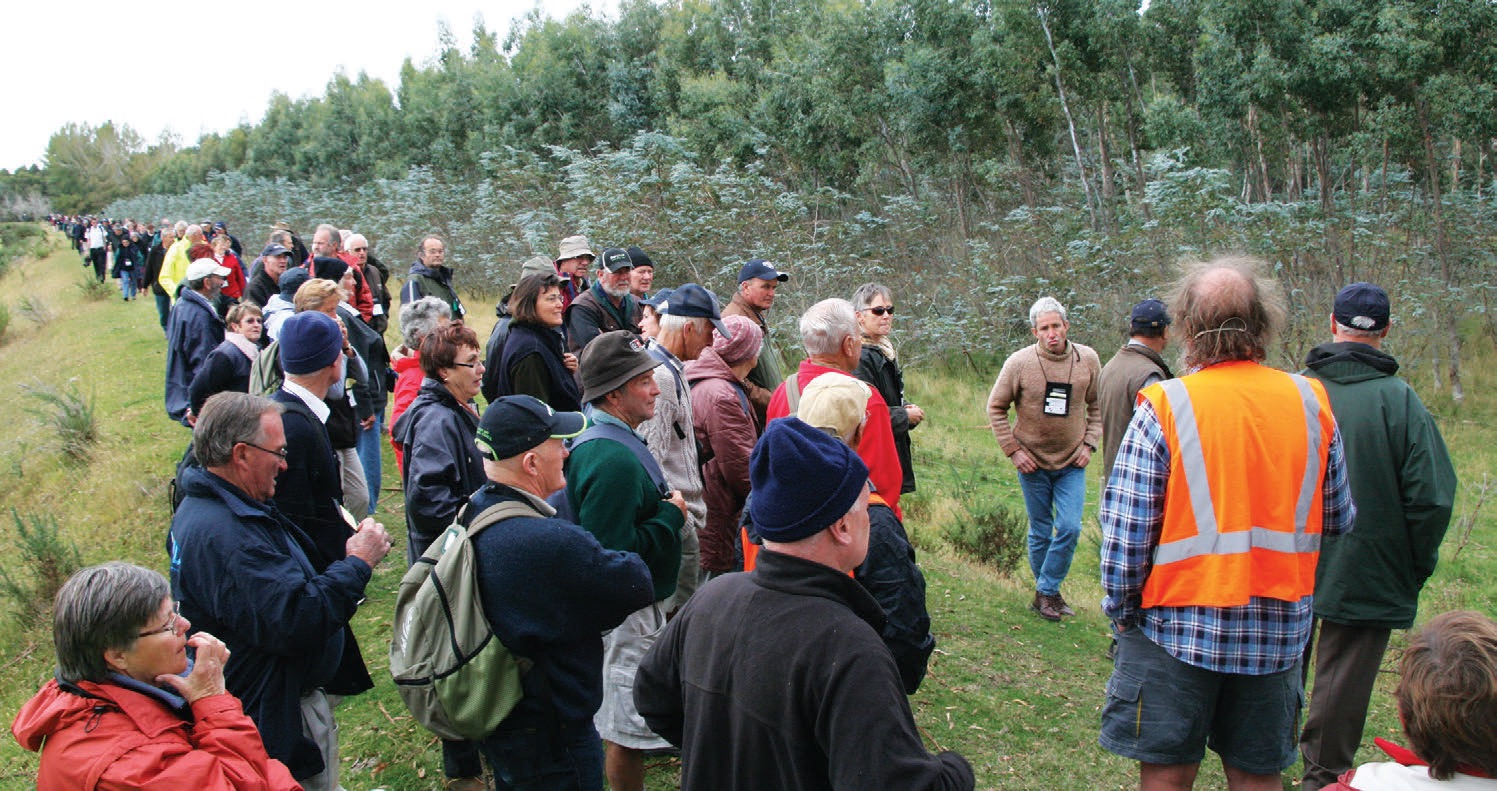