New Zealand has five native beech species, commonly known as red, black, silver, mountain and hard beech, each with a different natural geographic distribution. Of the five, red beech (Fusca fuscospora) and black beech (F. solandri) are the most readily available from nurseries, have the fastest growth rates, and hence are the best choices for landowners planning to establish a native beech plantation for timber. Beech timber properties vary between species, but all are generally straight- grained, with excellent working properties. End uses include flooring, veneer, interior joinery and furniture.

There are a few golden rules for establishing beech, applicable to most native species:

Black beech is tolerant of a wider range of site types, including droughty soils and low rainfall conditions.

All beech species are likely to establish best if planted in partial shelter such as within canopy gaps, or with the help of a nurse species established a few years before the beech is planted, especially on exposed sites. It is possible to establish beech on open sites, and early seedling survival may be enhanced by using short (0.6m high) shelters.

How many should I plant

The more densely trees are planted, the more likely they are to grow tall and straight with good timber potential. In theory tightly spaced trees will then need relatively little pruning or intervention other than thinning.

Form-pruning is recommended if the aim is to produce straight single stems suitable for milling. Form pruning involves pruning from ‘the top down’ – selecting a leading stem and removing competing leaders and steep-angled or particularly coarse branches. Often all that is required with beech is the removal of a double leader with loppers; the trees can then be left to grow for several more years without further intervention. Form pruning should be done once the trees are well-established and above the height of any competing vegetation – e.g. from around 2 metres tall. Suitable tools include normal loppers, long-handled loppers, and occasionally a pruning hand-saw.

Beech will generally self-prune following canopy closure. Where trees are open-grown or have retained large branches, the best stems can be gradually clear-pruned to whatever height required. Several pruning lifts may be needed as no more than 30% of foliage should be removed at any one pruning. Clear-pruning often attracts deer wanting to rub velvet from their antlers, so control deer before they ring-bark your best newly-pruned trees.

If densely planted stands are left-unthinned, the result will be a stand of tall, thin trees with good form but small-diameter stems limiting their potential for sawmilling. Thinning allows the remaining trees to grow larger diameter stems faster. 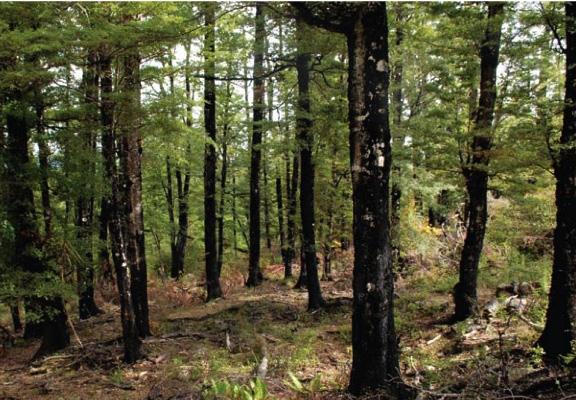 A Tane’s Tree Trust survey of plantations shows that mean diameters of 50 – 60 cm can be achieved within 100 years of planting beech on a range of sites. However, John and Rosie Wardle, who manage naturally regenerating black beech forest at their Woodside property in Oxford, North Canterbury, produce 45 cm diameter sawlogs over rotations averaging 50 – 55 years.