Forest Pathology in New Zealand No. 9. 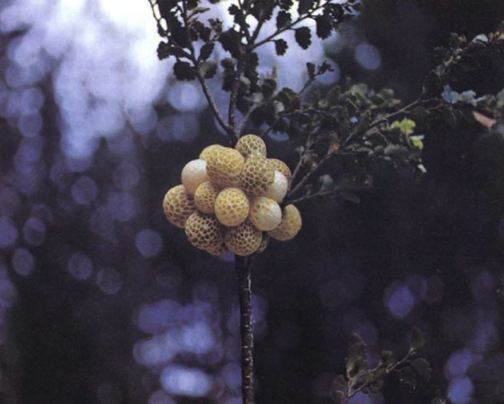 Type of injury
Development of perennial galls on branches and stems leading to malformation and occasionally to death of branches.

Diagnostic features
The fungi produce galls on branches and stems of silver beech ( Nothofagus menziesii ); these galls are perennial and produce crops of fruiting bodies each spring (September -November).
The distinguishing features of the three species are as follows:

Distribution
The fungi are present throughout New Zealand, wherever the host tree is found.

Disease development
Germinated spores invade the tissues of new shoots and produce chemical substances which cause proliferation of the host tissue and lead to gall formation. With C. gunnii and C. nigra the fungus travels only a short distance in the host, producing localised galls. With C. pallida, however, the fungus grows down the branch or stem and the gall increases steadily in length for many years.

Fruiting bodies arise from the spines produced in the wood of the host by the action of the fungus. These spines, consisting of fungal hyphae and woody tissue, project through the bark nearly to the exterior. Spores are discharged in visible clouds from ripe fruiting bodies.

The galls are perennial and keep growing as long as the host branch or stem is alive. 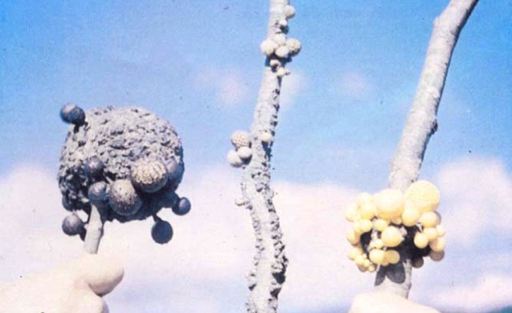 Economic importance
Cyttaria galls are most often found on heavily branched trees growing either on the borders of clearings or in open stands. Girdling galls may lead to the death of upper parts of the branch or stem. Galls of C. pallida cause twisting of the branches, which often break in high winds.

The effect of Cyttaria spp. on timber production in managed N. menziesii stands has not been studied.

Control
No control measures are known.

Notes: Species of Cyttaria grow only on Nothofagus spp. and are also found in South America (6 species) and Australia (2 species). In South America, the galls are used for making ornaments and the fruiting bodies are eaten.