In January 2009 a wasp was detected parasitising the eggs of the Acacia tortoise beetle, Dicranosterna semipunctata, in Rotorua. This beetle is a moderate pest of Australian origin that feeds primarily on Acacia menaloxylon in New Zealand. It was first detected in Auckland in 1996 and is now known to occur in Northland, Auckland, Coromandel, Waikato, Taupo and the Bay of Plenty. It was recorded in Rotorua for the first time in 2006 and is now quite abundant in the area. 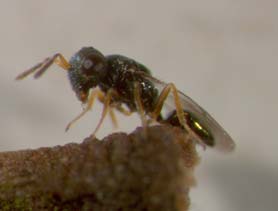 Previous attempts to use biological control to manage D. semipunctata have been relatively unsuccessful. In 1999 exploration in the beetle’s native range identified two egg parasitoids, Neopolycystus sp. and Enoggera polita, but no attempt was made to introduce either.

In 2000, the egg parasitoid Enoggera nassaui, introduced in 1987 to control the Eucalyptus tortoise beetle, Paropsis charybdis, was considered as a potential biological control agent for D. semipunctata. Although E. nassaui readily parasitises D. semipunctata eggs in the laboratory, parasitism has not been detected in the field, despite hundreds of eggs being collected and assessed.

Initiatives have also been taken to establish the ladybird Cleobora mellyi in regions of the North Island where D. semipunctata occurs. The ladybird was initially introduced against P. charybdis but only established in Marlborough. It has since been observed feeding on D. semipunctata eggs and was recently reported to have established in the North Island following efforts to increase its distribution (FH News 193).

The new parasitoid found exploiting D. semipunctata is thought to be a species of Neopolycystus. It has been confirmed that it is not N. insectifurax, a species detected in New Zealand in 2002 that contributes to the control of P. charybdis. Neither is it thought to be the same Neopolycystus species that failed to establish following its introduction against P. charybdis from Perth in 1987. It does not appear that the new parasitoid attacks P. charybdis.

At this stage no attempt has been make to determine its distribution or abundance in New Zealand. In Rotorua it appears to be parasitising a large proportion of D. semipunctata eggs but it is not known if the parasitoid population will be able to survive the winter months. If it does, the combined effects of this parasitoid and C. mellyi may have the potential to finally provide effective biological control of D. semipunctata.

Thanks to John LaSalle (CSIRO) for his work towards identifying this parasitoid.