The Forest Growers Levy and the small-scale forester

Up to 40 per cent of the current national forest harvest of 34 million tonnes is from small-scale woodlots. There are an estimated 300, 000 hectares of production forests on farmland. Of these, 180, 000 hectares, mainly in forests smaller than 40 hectares, have been planted since 1990 and are now in a major harvest mode.

The importance of the particular needs of these small-scale foresters are recognised with specific representation on the Forest Growers Levy Trust.  Most of the work programme covers the interests of all foresters, work such as tree breeding and forest management, health, safety and biosecurity. The focus of the Forest Growers Levy Trust is to ensure that the materials, information and technology from this work is just as accessible to small-scale foresters as it is to largescale operators.

A levy is collected any time a consignment of logs is delivered to a mill or port. This covers all species of trees which are harvested and sold for timber. The majority are radiata pine, but a levy is also paid on alternative species such as cypress and eucalypts as well as sustainably harvested native trees, such as beech or totara, which are sold for timber production.

The Commodity Levies Act was introduced in 1990 to allow producers in primary industries to be able to put a levy on what they produce and this money can then be invested in industry projects. Foresters first voted for a levy in 2013 for a six-year term. In 2019 the levy was endorsed after another forest owner referendum.

For a referendum to succeed, there has to be a majority of voters, and there has to be a majority of production which their vote represents. That means the levy vote has to have enough support from the thousands of small-scale foresters for it to be approved.  The rate for logs, which will raise around $11 million of levy income in 2022, means that every dollar of levy income supports more than $600 worth of exports.

Half of the levy is used by Forest Growers Research and overseen by the Forest Research Committee which consist of small-scale and large-scale growers. Research investment has looked at the potential of non-radiata species commonly grown by farm foresters, as well as helping woodlot harvesting with a range of supporting options.

The Specialty Woods Partnership is a seven-year $10 million programme which began in 2015. It includes a variety of tree species common on farm woodlots, such as cypress, Douglas-fir, along with durable and nondurable eucalypts.

The programme looks at the effect of breeding and growth conditions on the resulting wood properties. In particular are natural durability and stiffness, and how they can be used in modern engineered timber, such as cross laminated timber and laminated veneer lumber.

More details of the programme can be found on the Forest Growers Research website as well as from regular articles in Tree Grower.

The cost of harvesting small forest blocks can result in growers receiving little or no return for their forest investment. Finding a cost-effective harvesting system can be confusing for forest owners and harvesting contractors. The standard harvesting machines can struggle in woodlots and be proportionally more expensive to use. These big and heavy machines can damage farm paddocks, tracks and raceways.

To overcome these challenges a variety of novel harvesting solutions of value to small growers is being reviewed. Modified farm tractors are one viable alternative. An adapted Valtra tractor can operate as a forwarder for the harvesting operation, then be used to remediate the site. Studies have been completed on a Valtra forwarding tractor in small forest blocks in the North Island.

Small, low-cost trucks used for log transport are an alternative to the commonly used systems which can struggle to achieve acceptable production and affordability in small forest harvesting. Fertiliser spreaders can be reconfigured into trucks to transport logs from a processing site in the forest to a load-out point by a road built to a higher logging truck standard. This truck forwarding system avoids the need for a fully engineered road to the forest.

Studies have been completed on trucks used by a Northland contractor as part of a unique harvesting system in a small Northland forest. Many of you will already have seen detailed articles about these projects in
previous issues of Tree Grower magazine. 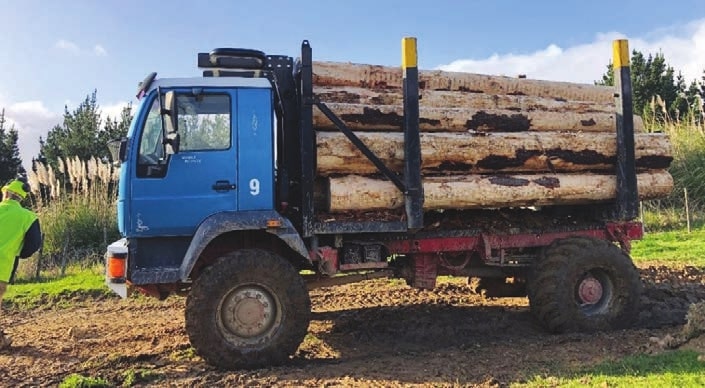 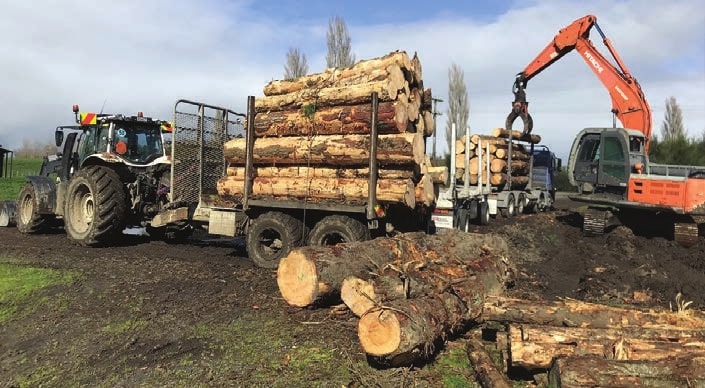 Informed land-use choice is vital for owners of small woodlots. Historically it has been based on whether a given tree species will perform well in a particular location. Now, these decisions are far more complicated. For example, understanding the role of carbon and the Emissions Trading Scheme on a particular farm and where to find information on how carbon trading works, differences in carbon sequestration, eligibility and the financial benefits and risks of registering plantings within the Emissions Trading Scheme.

Land owners also need to consider how to select harvesters and set-up harvesting agreements. Currently research is being carried out on a series of best practice case studies for exotic and native site selection and tree management, and how environmental effects at harvest can be mitigated with good planning and harvest management.

Decades of hard work, on a network of different size trial sites throughout New Zealand, has developed methods suitable for using on woodlots. Levy funding continues to support routine measurement of these sites and the corresponding application of the information obtained.

Most recently, an updated version of the redwood growth model was made available on the Forest Growers Research website. More detailed information, from more sites than before, indicates that redwoods are growing faster than previously assessed, making them more attractive to grow for timber and for the Emissions Trading Scheme.

Levy funding has also been used to create harvesting assessment methods, TreeFarmer and the Woodlot Analysis Tool. The latter is web-based and provides semi-specific costs and returns from harvesting a woodlot described by its forest owner. The user pinpoints where their woodlot is on a digital map, gives a basic description of the woodlot, and then enters representative log grades to be harvested, yields and the log prices. A report is produced with expected gross and nett returns, and costs from harvesting and transporting wood from the woodlot to the wood buyers.

Similarly, TreeFarmer is an easy-to-use web application to provide knowledge and awareness of forest operations and improve forest investment results.

Obviously, most levy-funded research is designed to benefit all forest owners irrespective of the size of their forest and many other activities which particularly benefit small-scale foresters. A wildfire awareness leaflet was distributed to more than 100, 000 rural addresses with advice on how to reduce wildfire risk on their properties and what to do if a fire does break out. The levy has also co-funded the Fire and Emergency New Zealand fire awareness campaign to the general public each summer fire season.

A national forest surveillance scheme operates for new pests or diseases which find their way into plantation forests. It extends to protecting conservation, amenity and horticulture businesses.

There is no primary sector more dedicated to health and safety than forestry. The Forest Industry Safety Council heads efforts to reduce deaths and injury rates in forests. This is for all forests, whether they are forests under corporate ownership and management smallscale operations where there is no dedicated oversight of health and safety practices.

Don Carson, is the Communications Manager and Bart Challis is the Research Manager for the Forest Growers Levy Trust.