What is wrong with wilding trees?

Two years ago, the New Zealand wilding control management strategy was written. Its conclusion of ‘a stitch in time saves nine’ was sufficiently convincing that a business case for control was made to Treasury. This was eventually approved, with $16 million being allocated over a period of four years. The Ministry for Primary Industries is responsible for overseeing the expenditure of this sum.

It is estimated that during the first year of operation, wildings have been removed from over a million hectares, mostly in the eastern South Island hill and high country. A major follow-up control effort is planned for the 2018/19 season.

What is wrong with wilding trees?

Wildings are the natural regeneration, or seedling spread, of introduced trees. The term is usually applied to members of the family Coniferae − pines, firs and larches – the group in which most of the major spreading forestry species of concern occur. The majority of wildings grow close to the parent seed source and are termed fringe spread. Wildings further afield are termed distant spread and usually occur as scattered outlier trees. Often these have grown from seed originating from hilltops and exposed ridges and slopes, which are known as take-off sites.

The most frequent forestry-related question I am asked is − what is wrong with wilding pines? The people wanting an answer are aware that many forests either planted or wildings have been registered with the Emissions Trading Scheme, with carbon credits sold for handsome sums. They may have seen, and been attracted by, the Douglas-fir wildings back-dropping Queenstown, the larch framing superb views of Mt Cook on the road to the Hermitage, and those surrounding Castle Hill village and Naseby township − lodgepole pine, larch, Corsican pine and Douglas-fir.

They have also seen tourists buying place-mats and calendars of high country scenes which often feature wilding trees. Some may even be aware of the background to Glentanner’s tourist accommodation success, where timber used from wilding larch grown on the station allowed building construction to be significantly cheaper than normally possible. These people conclude that if wildings can be worth money and look good, then why are we trying to remove them and prevent their spread?

The simple answer to this is that wilding control is needed due to their ability to spread vigorously into areas where they are not wanted. More about that later. 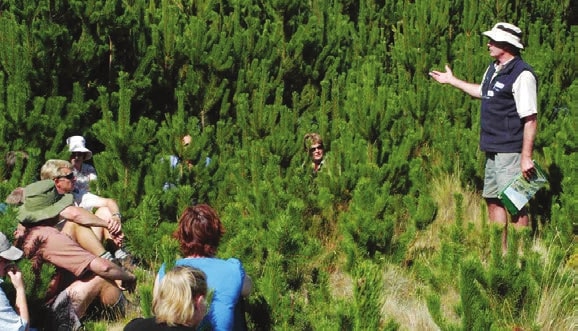 Before we proceed further, it must be pointed that some spread-prone trees and forests are not acting as a seed source to invade significant new areas due to their location and the surrounding land-use − usually improved pasture or closed canopy forest. As long as this is the case, and they are not negatively affecting important existing values such as visual landscape, existing land-use and conservation, then there is indeed no need to remove them. They can be managed for normal commercial and amenity purposes. They also have environmental benefits such as shelter, soil stabilisation and wildlife habitat.

However, unfortunately, for every wilding tree or forest that can regarded positively, I believe that there are many where the positive aspects are outweighed by the negative. As with the use of trees anywhere, it is all about the wise or informed use of the right species in the right site. Only too often, wildings are the wrong species in the wrong site.

From a landscape point of view, my concern is probably less than that of some others as wildings can look more attractive than planted blocks of trees. They tend to grow best in certain sites and not in others and this, combined with feathered edges of often uneven-sized trees, allows them to blend better into the natural topography. However, even in these situations, the dark green, conical shape of conifers can be very obvious in landscapes dominated by pastel-coloured, low stature shrublands and tussock grasslands.

In addition, they grow faster and taller than most of our native vegetation and can very effectively block off views and create icy road conditions. Those familiar with the wilding trees alongside the Mt Cook highway in the Mackenzie Basin would be well aware of this. However, the visual landscape will always be a matter of value judgement, with beauty being in the eye of the beholder, and much variation in beholder viewpoint. Fortunately, our hill and high country is a large area, and as long as we do not let wildings get out of hand, there will always be enough variety and space to satisfy the tastes of most observers, whether they be introduced tree advocates or opponents.

It is well accepted that forests can significantly reduce water yield or quantity although water quality is often improved. Research has shown that major reductions in water yield can only be detected when the tree cover exceeds 20 per cent of a catchment’s area. Current high awareness of wilding spread is unlikely to see such cover levels reached in the future. In addition, new aerial boom-spray techniques allow ready control of closed canopy conifers.

So it is not with the visual or water yield aspects of wildings that I take issue. It is with their influence on conservation, future land use options and their perceived commercial value – along with the resources required to retain control, in the face of their ability to spread insidiously until they reach a stage where control is not possible.

Once wildings invade an area their relatively fast growth can soon dominate the site. Most rare or threatened native plants and animals find it difficult to compete and must try to survive in a very modified habitat. Even where conservation is not threatened, future land use options are reduced, as the sheer bulk of wilding trees means considerable extra cost if they have to be removed for pasture development or plantation forestry. I have experienced the frustration and time delays involved in having to remove rogue outlier wildings to establish a more useful crop.

As the manager of a large wilding forest, I can safely say that it is mainly a myth that most wildings can fetch good money in timber or fibre sales. Profitable sales have been made from some wilding stands, but such stands are nearly always fringe spread within a hundred metres or less of the parent trees. Within this distance seedlings establish densely and therefore grow up straight, with small branches and little taper.

Some species can be harvested at a relatively young age, around 20 to 30 years old, for posts and poles, or left for some decades longer until natural suppression favours the better trees which can yield good sawlogs. However, of the estimated 1.8 million hectares of land affected by wilding spread in New Zealand, only a small fraction contains fringe spread. Most is distant spread growing well away from the parent trees. These outlier wildings are often malformed, have large branches and pronounced taper. At best they will fetch firewood prices – to quote one commentator ‘the equivalent of growing sheep for dags’.

In addition, approximately two thirds of the area affected by spread involves contorta or Lodgepole pine Pinus contorta. This species may be valuable in its native North American home range, but it has yet to attract a ready market in New Zealand. Therefore, when you are considering the commercial worth of wildings for timber and fibre, please be aware that in most cases they are the wrong species, on the wrong site, widely scattered, of poor form and often far from markets.

This is the relatively new boy on the block, and has significantly altered the traditional view of a forest’s worth and the time-frame associated with the income. Forests established after 1989 can be registered with the Emissions Trading Scheme, after which there is an allocation of carbon credits, acknowledging the amount of carbon dioxide taken out of the atmosphere and stored in the trees. Credits can then be sold on an increasingly viable national and international market.

The ETS is not quite as simple as that, but the point at issue here is that some wilding forests have qualified for ETS registration. Such registration will be much harder in the future, and it will only be granted for forests on the right site with little risk of significant further spread. Any owners of ETS wilding forests must accept liability for the further unwanted spread from those trees.

When considering the case of those advocating that wildings are the answer to meeting our carbon storage targets, a colleague commented ‘That is a bit like saying that farming rabbits or possums is a solution to improving our export earnings’. Such opinions push the positives, but ignore the negatives, the most worrying of which is our ability to retain control over the long term.

This is my answer to the question − What is wrong with wilding trees? There is nothing wrong with wildings in situations where they can be easily contained, but we must always be in a position to retain control at an acceptable cost. Supporters of wilding spread must address the core question of ‘how far?’ Where do you draw the line, how will you do that, and what will be the cost?

Wildings are very capable of invading unimproved grassland areas, but do supporters want to see all areas other than improved pastures, swamps and intact native forest and shrublands, taken over by wildings right up to road margins? If you ask most will say ‘No, not everywhere’, but they fail to address the significant effort and cost required in keeping those no-go areas clear. In addition, they are often quite happy to accept contorta as the spreading species, when if carbon storage or commercial return is the aim, there are much better species available. Intentional forests will always have better volume growth and form. Therefore, if an area is considered best in trees, surely it is logical to establish the best species for the job, rather than to accept forests by default.

Finally, I would not want the above writings to make any reader think that I am against all use of introduced trees in our hill and high country. Far from it. Many shelter and soil stabilisation roles can only be practically filled by introduced trees. Hill and high-country farmers must diversify to remain viable custodians of their land, as it is very difficult to be green if you are in the red.

Forestry is one of the few long-term sustainable diversification options available to them, especially now that they have the carbon storage option which can bring about a commercial return over a relatively short time-frame. In addition, from an ecosystem point of view there is ample proof that trees can play an important role relative to healthy and stable soils and diverse fauna and flora populations. I fully support the wise informed use of trees in the appropriate places.

Nick Ledgard has worked with trees in New Zealand’s hill and high country for almost 50 years, most of that time with Scion, the trading name for the Forest Research Institute. In 2006 he set up the NZ Wilding Conifer Management Group, and managed that until retirement in 2011. One result was a national Wilding Conifer Status Report, which in 2014 was developed into the NZ Wilding Conifer Management Strategy 2015-2030, which has resulted in major government-funded removal operations over the last year. Away from work, and together with a colleague, he manages 380 hectares of wilding forest for production and protection.