Nelson Parker, owner of the Kaihu Kauri Mill, is a larger than life character. A former champion axeman, he is built like a Sherman tank with a personality to match and a deceptively sharp brain. When he whistled and ordered his noisy dog to sit, one or two members of the group appeared ready to crouch. The dog is employed to protect Nelson’s yard from thieves.

An encounter with the dog late at night might be painful, but you would not wish to run into Nelson while stealing some of his swamp kauri. We spent an afternoon at the Kaihu Mill, and this proved to be one of the highlights of the conference in Whangarei earlier this year.

Why did kauri, which do not grow in swamps, happen to be buried in them? There are different theories, and perhaps all of them are correct in different locations and at different times. Nelson Parker has his opinion.

It is a still morning in Northland, 50,000 years ago. The dense forests that cover the landscape are dominated by kauri and would have been familiar to us, although many of the birds would not. Then the ground begins to shake, and the air is filled with the sound of crashing trees and shrieking birds. This is no ordinary earthquake but the distant echo of something seriously big, a major subduction shift far offshore in the Kermadec trench, and reaching 11 or 12 on the Richter scale.

On the east coast, the sea retreats, exposing a large expanse of sea bed. Then a towering wall of water rolls in, the first of a series of tsunami waves. As it moves on shore it strips trees and soils from the plains and hillsides. With the ebb and flow of succeeding waves, giant kauri are tossed like matchsticks in a boiling cauldron of water and mud. Many of them are swept offshore. The waves retreat leaving behind the carcasses of uprooted trees. Where exposed, these slowly erode, and the forest quietly reclaims the land. Others remain, buried in mud and silt, and preserved in an environment without oxygen, from which they will emerge to the light 50,000 years later as swamp kauri. 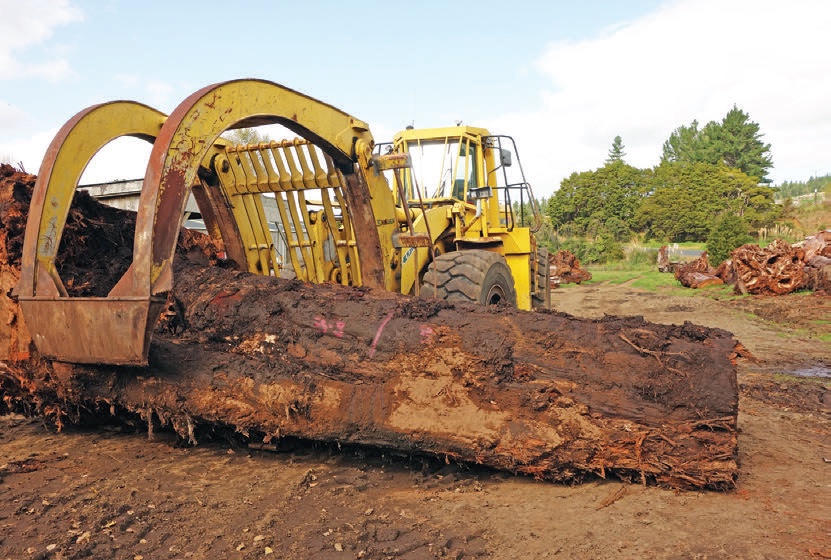 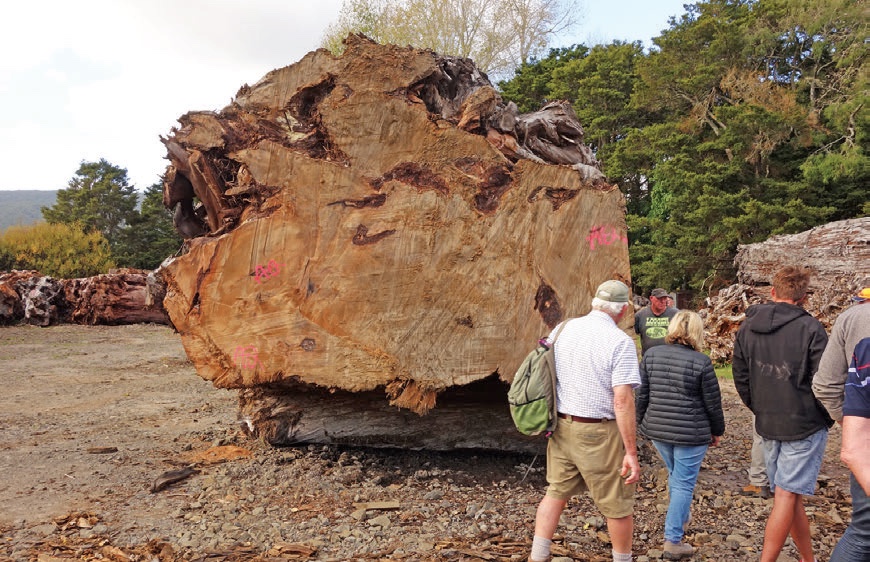 That is one version of how it might have happened, a little melodramatic perhaps, but we know that tsunamis, some of them major, have often made landfall in the past. In what might be called the catastrophic theory of the origin of swamp kauri cyclonic events are other contenders. There is another version, more prosaic and therefore less interesting, although more generally favoured.

It is 45,000 years ago on a boggy coastal site near Awanui in the Far North. On dry ground between areas of marsh are 600-year-old kauri. Water drainage in the swamps is impaired by drifting dunes and it slowly rises, engulfing the roots. The trees are now unstable and as they topple into the swamp, their roots and lower stem are submerged and incorporated within it. Soon new channels open, the water level falls and the process is repeated. Recent excavations on this site have shown three consecutive layers of submerged trees. Based on carbon 14 dating, all of them fell within a time frame of 2,000 years.

Carbon 14 dating across a range of Northland sites for swamp kauri have provided evidence of many disturbances, and continuous occupation by kauri from 60,000 years ago through to 20,000 years ago when the record stops. That date coincides with the glacial maximum in the last ice age, when kauri would have been confined to small refuges. The record resumes at about 8,000 years ago in the Waikato, when kauri spread south and swamps were made available by the drifting course of the Waikato river.

For a Northland farmer who has spent considerable effort and expense in draining a swamp, the sight of a long buried log emerging from the surface at first glance means trouble. That is, until it becomes apparent that it is the tip of an iceberg and beneath it lie 40 tonnes of ancient kauri, with other giants nearby. It will not be long before people come calling.

The swamp kauri industry, if that is not too refined a term, is a bit like the Wild West, with the usual cast of characters − a motley group of cowboys, one or two gunslingers, some hard-working citizens out to make an honest buck and a shortage of sheriffs. Nelson Parker is clearly one of the good guys and keen to support a local industry.

Like everything else at Kaihu Kauri including its owner, the showroom is oversize. Its centrepiece is an enormous kauri log. It contains examples of every conceivable end use for swamp kauri, ranging from standard bowls and ornaments through to stunning examples of wood sculpture. The best of these, made in the Kaihu workshop, are tables in which natural defects in the timber are retained and made a feature. Channels in the surface are sprinkled with fragments of paua and filled with resin. These will be instant heirlooms.

With swamp kauri, nothing is wasted. Under cover in the yard and awaiting delivery is a massive root ball, polished and preserved by teak oil and somehow managing to be both grotesque and magnificent. This is fit to grace the entrance of a Russian oligarch’s mansion, which as it happens, is where this particular item is destined to go.

Extracting logs from a Northland swamp is not a job for the faint hearted. Each log is an individual challenge. The work requires a high level of skill and ingenuity and a good deal of courage. It also requires some serious equipment, chainsaws with long customised bars, and heavy machines that will grapple heavy logs and wrestle them to the surface.

In the yard we saw a 27 tonne log, recently extracted, its bark intact and dripping water. Nearby is a segment from a 40 tonne log. A total of 12 truckloads of soil were brought in to fill the hole left after it was lifted from its bed. The wood is surprisingly pale. After prolonged immersion, many of the chemical compounds which confer durability are leached out. It therefore needs early treatment to restore durability and teak oil is commonly used on exposed surfaces.

In the debates over the use of swamp kauri there are two areas of contention. The first is its commercial exploitation. Swamp kauri is a limited and non- renewable resource. There is an argument that it is part of our national heritage and no less worthy of regulated use than minerals or oil, and that it should be used to support an industry of crafts people and joiners, rather than join the flow of undeveloped commodities into offshore markets. It is estimated that about 90 per cent of swamp kauri is currently exported, mainly to China.

For export, MPI requires a milling statement and export approval, and items should be ‘finished or manufactured products, or personal items’. Some of the ‘finished products’ are interesting. Common items for export are table tops. These are big tables, of substantial thickness, several metres in width, and many metres long. One of these tables might fit into aViking’s banqueting hall, but could be challenging when introduced into a mini apartment in a Shanghai skyscraper. The export of giant ‘temple poles’ by some millers might be seen as a creative response to regulation.

At a value of $5,000 to $8,000 a cubic metre, swamp kauri is miller’s gold, and this is a gold rush that will end like all the others. It has been claimed that supply will run out in 10 years, although no doubt new finds will come to light. Swamps that are in public ownership are protected by law, both for their hidden contents and for the rare plants that grow in what are delicate and vulnerable ecosystems, but even these have been raided. Those on private land are up for grabs. 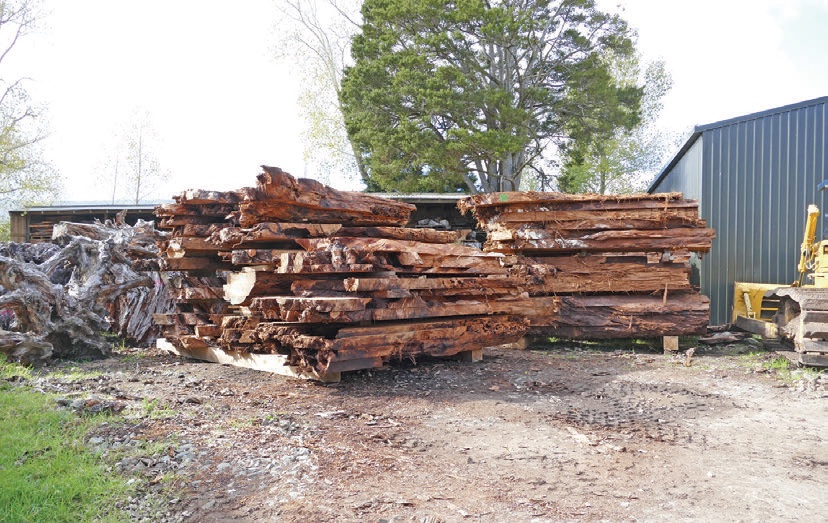 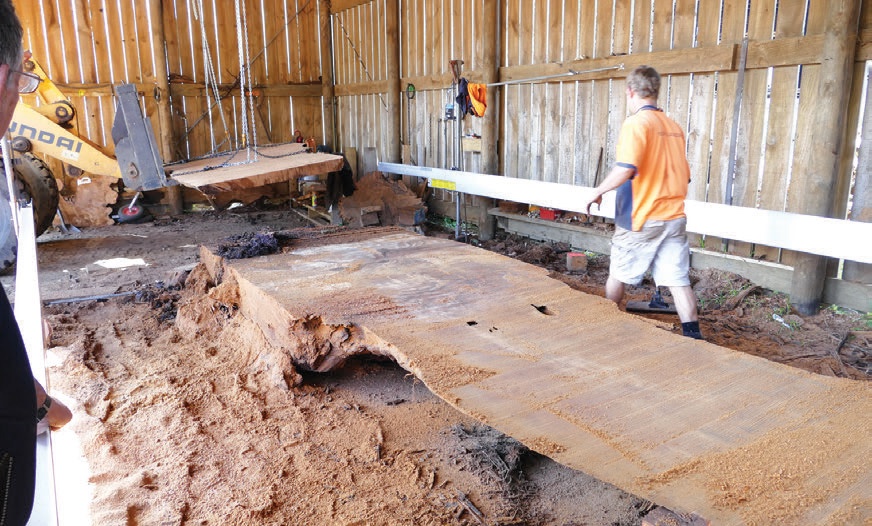 The second area of contention is a conflict of interest between commercial exploitation and the interests of science. Swamp kauri has been described as a ‘scientific resource of international significance’. The period of time accessible to carbon 14 dating covers that period in human prehistory in which our ancestors emerged from Africa and populated the earth. Growth ring studies on our ancient trees can make an important contribution to an understanding of changes in world climate at the time of those early migrations.

Research at the universities in Auckland and Waikato has included growth ring studies and carbon 14 dating. In addition to ice age data, they have provided a complete growth ring record for kauri that extends back more than 4,500 years and an understanding of past El Nino events. Studies have been linked to Oxford and Exeter Universities in England.A team at Harvard in the United States have studied oxygen isotopes which show a correlation with temperature changes.

If there is a conflict of interest between commerce and science, there is scope for cooperation. The scientists depend on the millers providing them with material for their studies. We saw an example in Nelson Parker’s yard. In a corner was an orderly pile of tree rings, marked and documented. For some time, Nelson has been involved with the University of Auckland in providing material for dendrochronology. This how it should be done, but time is running out. 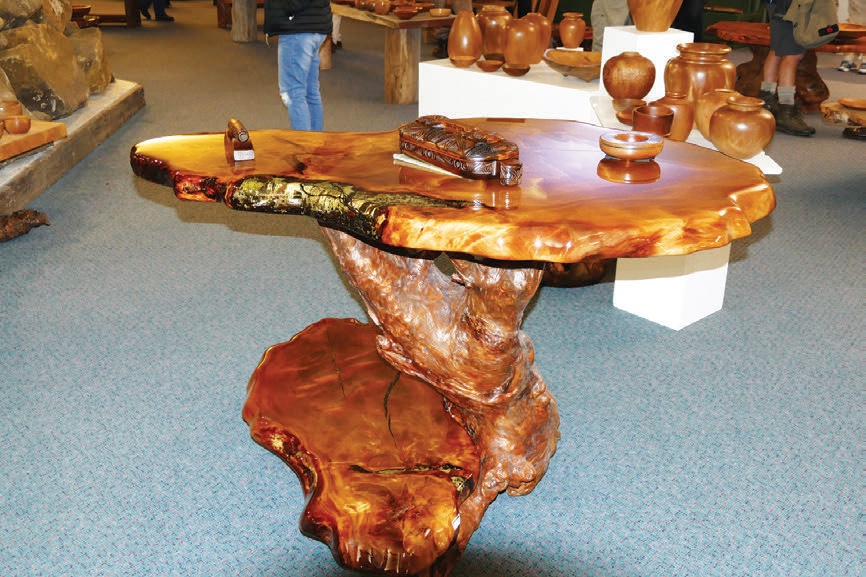